The greater part of Paphlagonia is a rugged mountainous country, but it contains fertile valleys and produces a great abundance of hazelnuts and fruit – particularly plums, cherries and pears. The mountains are clothed with dense forests, conspicuous for the quantity of boxwood that they furnish. Hence, its coasts were occupied by Greeks from an early period. Among these, the flourishing city of Sinope, founded from Miletus about 630 BC, stood pre-eminent. Amastris, a few miles east of the Parthenius river, became important under the rule of the Macedonian monarchs; while Amisus, a colony of Sinope situated a short distance east of the Halys river (and therefore not strictly in Paphlagonia as defined by Strabo), grew to become almost a rival of its parent city.

The most considerable towns of the interior were Gangra – in ancient times the capital of the Paphlagonian kings, afterwards called Germanicopolis, situated near the frontier of Galatia – and Pompeiopolis, in the valley of the Amnias river, near extensive mines of the mineral called by Strabo sandarake (red arsenic or arsenic sulfide), largely exported from Sinope.

The Paphlagonians were one of the most ancient nations of الأناضول and listed among the allies of the Trojans in the Trojan War (ca. 1200 BC), where their king Pylaemenes and his son Harpalion perished (Iliad, ii. 851—857). According to Homer and Livy, a group of Paphlagonians, called the Enetoi in Greek, were expelled from their homeland during a revolution. With a group of defeated Trojans under the leadership of the Trojan prince Antenor, they emigrated to the northern end of the Adriatic coast and later merged with indigenous Euganei giving the name Venetia to the area they settled.

In the time of the Hittites, Paphlagonia was inhabited by the Kashka people, whose exact ethnic relation to the Paphlagonians is uncertain. It seems perhaps that they were related to the people of the adjoining country, Cappadocia,[مطلوب توضيح] who were speakers of one of the Anatolian branch of the Indo-European languages. Their language would appear, from Strabo's testimony, to have been distinctive. 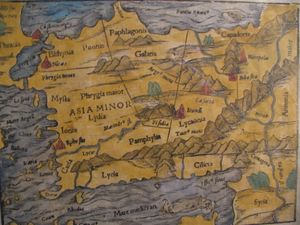 Detail of a 15th-century map showing Anatolia, with Paphlagonia at top.

Paphlagonians were mentioned by Herodotus among the peoples conquered by Croesus, and they sent an important contingent to the army of Xerxes in 480 BC. Xenophon speaks of them as being governed by a prince of their own, without any reference to the neighboring satraps, a freedom perhaps due to the nature of their country, with its lofty mountain ranges and difficult passes. All these rulers appear to have borne the name Pylaimenes as a sign that they claimed descent from the chieftain of that name who figures in the Iliad as leader of the Paphlagonians.

At a later period, Paphlagonia passed under the control of the Macedonian kings, and after the death of Alexander the Great, it was assigned, together with Cappadocia and Mysia, to Eumenes. However, it continued to be governed by native princes until it was absorbed by the encroaching power of Pontus. The rulers of that dynasty became masters of the greater part of Paphlagonia as early as the reign of Mithridates Ctistes (302–266 BC), but it was not until 183 BC that Pharnaces reduced the Greek city of Sinope under their control. From that time, the whole province was incorporated into the kingdom of Pontus until the fall of Mithridates (65 BC).

Pompey united the coastal districts of Paphlagonia, along with the greater part of Pontus, with the Roman province of Bithynia, but left the interior of the country under the native princes, until the dynasty became extinct and the whole country was incorporated into the Roman Empire. The name was still retained by geographers, though its boundaries are not distinctly defined by the geographer Claudius Ptolemy. Paphlagonia reappeared as a separate province in the 5th century AD (Hierocles, Synecdemus c. 33). In the 7th century it became part of the theme of Opsikion, and later of the Bucellarian Theme, before being split off c. 820 to form a separate province once again.

Ancient episcopal sees of Paphlagonia listed in the Annuario Pontificio as titular sees:[1]

3
The unnamed parameter 2= is no longer supported. Please see the documentation for {{columns-list}}.

Wikisource has the text of the 1911 Encyclopædia Britannica article پافلاگونيا.