World map of countries by their raw ecological footprint, relative to the world average biocapacity (2007) 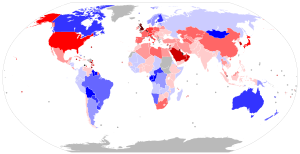 The ecological footprint is a method promoted by the Global Footprint Network to measure human demand on natural capital, i.e. the quantity of nature it takes to support people or an economy.[2][3][4] It tracks this demand through an ecological accounting system. The accounts contrast the biologically productive area people use for their consumption to the biologically productive area available within a region or the world (biocapacity, the productive area that can regenerate what people demand from nature). In short, it is a measure of human impact on the environment.

Footprint and biocapacity can be compared at the individual, regional, national or global scale. Both footprint and biocapacity change every year with number of people, per person consumption, efficiency of production, and productivity of ecosystems. At a global scale, footprint assessments show how big humanity's demand is compared to what Earth can renew. Global Footprint Network estimates that, as of 2014, humanity has been using natural capital 1.7 times as fast as Earth can renew it, which they describe as meaning humanity's ecological footprint corresponds to 1.7 planet Earths.[1][5][6]

Ecological footprint analysis is widely used around the world in support of sustainability assessments.[7] It enables people to measure and manage the use of resources throughout the economy and explore the sustainability of individual lifestyles, goods and services, organizations, industry sectors, neighborhoods, cities, regions and nations.[2]

The first academic publication about ecological footprints was written by William Rees in 1992.[8] The ecological footprint concept and calculation method was developed as the PhD dissertation of Mathis Wackernagel, under Rees' supervision at the University of British Columbia in Vancouver, Canada, from 1990 to 1994.[9] Originally, Wackernagel and Rees called the concept "appropriated carrying capacity".[10] To make the idea more accessible, Rees came up with the term "ecological footprint", inspired by a computer technician who praised his new computer's "small footprint on the desk".[11] In 1996, Wackernagel and Rees published the book Our Ecological Footprint: Reducing Human Impact on the Earth.[12]

The simplest way to define an ecological footprint is the amount of environmental resources necessary to produce the goods and services that support an individual's particular lifestyle.[13]

The model is a means of comparing consumption and lifestyles, and checking this against biocapacity. The tool can inform policy by examining to what extent a nation uses more (or less) than is available within its territory, or to what extent the nation's lifestyle would be replicable worldwide. The footprint can also be a useful tool to educate people about overconsumption, with the aim of altering personal behavior. Ecological footprints may be used to argue that many current lifestyles are not sustainable. Country-by-country comparisons show the inequalities of resource use on this planet. 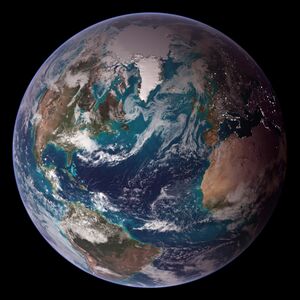 The natural resources of Earth are finite, and unsustainable given current levels of use.

The focus of ecological footprint accounting is renewable resources. The total amount of such resources which the planet produces according to this model has been dubbed biocapacity. Ecological footprints can be calculated at any scale: for an activity, a person, a community, a city, a town, a region, a nation, or humanity as a whole. Footprint values are categorized for carbon, food, housing, goods and services. This approach can be applied to an activity such as the manufacturing of a product or driving of a car. This resource accounting is similar to life-cycle analysis wherein the consumption of energy, biomass (food, fiber), building material, water and other resources are converted into a normalized measure of land area called global hectares (gha).[بحاجة لمصدر]

Since 2003, Global Footprint Network has calculated the ecological footprint from UN data sources for the world as a whole and for over 200 nations (known as the National Footprint Accounts). The total footprint number of Earths needed to sustain the world's population at that level of consumption are also calculated. Every year the calculations are updated to the latest year with complete UN statistics. The time series are also recalculated with every update since UN statistics sometimes correct historical data sets. Results are available on an open data platform.[1] Lin et al. (2018) finds that the trends for countries and the world have stayed consistent despite data updates.[5] Also, a recent study by the Swiss Ministry of Environment independently recalculated the Swiss trends and reproduced them within 1–4% for the time period that they studied (1996–2015).[15] Since 2006, a first set of ecological footprint standards exist that detail both communication and calculation procedures. The latest version are the updated standards from 2009.[16]

The ecological footprint accounting method at the national level is described on the website of Global Footprint Network[16] or in greater detail in academic papers, including Borucke et al.[17]

The National Accounts Review Committee has published a research agenda on how to improve the accounts.[18]

For 2017 Global Footprint Network estimated humanity's ecological footprint as 1.73 planet Earths. According to their calculations this means that humanity's demands were 1.73 times more than what the planet's ecosystems renewed.[1][5]

In 2007, the average biologically productive area per person worldwide was approximately 1.8 global hectares (gha) per capita. The U.S. footprint per capita was 9.0 gha, and that of Switzerland was 5.6 gha, while China's was 1.8 gha.[19][20] The WWF claims that the human footprint has exceeded the biocapacity (the available supply of natural resources) of the planet by 20%.[21] Wackernagel and Rees originally estimated that the available biological capacity for the 6 billion people on Earth at that time was about 1.3 hectares per person, which is smaller than the 1.8 global hectares published for 2006, because the initial studies neither used global hectares nor included bioproductive marine areas.[12] 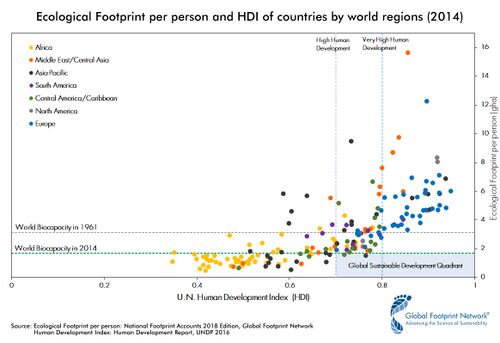 The Earth's biocapacity has not increased at the same rate as the ecological footprint. The increase of biocapacity averaged at only 0.5% per year (SD = 0.7).[5] Because of agricultural intensification, biocapacity was at 9.6 billion gha in 1961 and grew to 12.2 billion gha in 2016.[5]

According to Wackernagel and his organisation, the Earth has been in "overshoot", where humanity is using more resources and generating waste at a pace that the ecosystem cannot renew, since the 1970s.[5] In 2018, Earth Overshoot Day, the date where humanity has used more from nature than the planet can renew in the entire year, was estimated to be August 1.[23] In 2020, because of reduction in resource demand due to COVID-19 lockdowns, Earth Overshoot Day was delayed to August 22.[24] Now more than 85% of humanity lives in countries that run an ecological deficit.[2]

According to Rees, "the average world citizen has an eco-footprint of about 2.7 global average hectares while there are only 2.1 global hectare of bioproductive land and water per capita on earth. This means that humanity has already overshot global biocapacity by 30% and now lives unsustainabily by depleting stocks of 'natural capital'."[25] 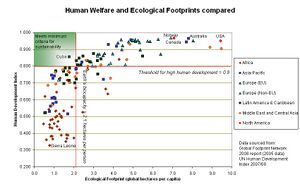 The figure (right) examines sustainability at the scale of individual countries by contrasting their Ecological Footprint with their UN Human Development Index (a measure of standard of living). The graph shows what is necessary for countries to maintain an acceptable standard of living for their citizens while, at the same time, maintaining sustainable resource use. The general trend is for higher standards of living to become less sustainable. As always, population growth has a marked influence on levels of consumption and the efficiency of resource use.[27][28]:45 The sustainability goal is to raise the global standard of living without increasing the use of resources beyond globally sustainable levels; that is, to not exceed "one planet" consumption. The information generated by reports at the national, regional and city scales confirm the global trend towards societies that are becoming less sustainable over time.[29][30]

Studies in the United Kingdom

The UK's average ecological footprint is 5.45 global hectares per capita (gha) with variations between regions ranging from 4.80 gha (Wales) to 5.56 gha (East England).[20]

BedZED, a 96-home mixed-income housing development in South London, was designed by Bill Dunster Architects and sustainability consultants BioRegional for the Peabody Trust. Despite being populated by relatively average people, BedZED was found to have a footprint of 3.20 gha (not including visitors), due to on-site renewable energy production, energy-efficient architecture, and an extensive green lifestyles program that included London's first carsharing club.[بحاجة لمصدر] Findhorn Ecovillage, a rural intentional community in Moray, Scotland, had a total footprint of 2.56 gha, including both the many guests and visitors who travel to the community. However, the residents alone had a footprint of 2.71 gha, a little over half the UK national average and one of the lowest ecological footprints of any community measured so far in the industrialized world.[31][32] Keveral Farm, an organic farming community in Cornwall, was found to have a footprint of 2.4 gha, though with substantial differences in footprints among community members.[33]

Ecological footprint at the individual level 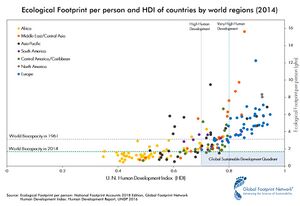 In a 2012 study of consumers acting 'green' vs. 'brown' (where green people are "expected to have significantly lower ecological impact than 'brown' consumers"), the conclusion was "the research found no significant difference between the carbon footprints of green and brown consumers".[34][35] A 2013 study concluded the same.[36][37]

A comprehensive review commissioned by the Directorate-General for the Environment (European Commission) was published in June 2008. The European Commission's review found the concept unique and useful for assessing progress on the EU’s Resource Strategy. They also recommended further improvements in data quality, methodologies and assumptions.[42]

A number of national government agencies have performed collaborative or independent research to test the reliability of the ecological footprint accounting method and its results.[51] They have largely confirmed the accounts' results; those who reproduced the assessment generating near-identical results. Such reviews include those of Switzerland,[52][53] Germany,[54] France,[55] Ireland,[56] the United Arab Emirates[57] and the European Commission.[58][59]

Global Footprint Network has summarized methodological limitations and criticism in a comprehensive report available on its website.[60]

Some researchers have misinterpreted ecological footprint accounting as a social theory or a policy guideline, while in reality it is merely a metric that adds up human demands that compete for the planet's regenerative capacity. Examples of such confusions include Grazi et al. (2007) who performed a systematic comparison of the ecological footprint method with spatial welfare analysis that includes environmental externalities, agglomeration effects and trade advantages. Not recognizing that the ecological footprint is merely a metric, they conclude that the footprint method does not lead to maximum social welfare.[61] Similarly, Newman (2006) has argued that the ecological footprint concept may have an anti-urban bias, as it does not consider the opportunities created by urban growth.[62] He argues that calculating the ecological footprint for densely populated areas, such as a city or small country with a comparatively large population—e.g. New York and Singapore respectively—may lead to the perception of these populations as "parasitic". But in reality, ecological footprints just document the resource dependence of cities—like a fuel gauge documents a car's fuel availability. Newman questions the metric because these communities have little intrinsic biocapacity, and instead must rely upon large hinterlands. Critics argue that this is a dubious characterization since farmers in developed nations may easily consume more resources than urban inhabitants, due to transportation requirements and the unavailability of economies of scale. Furthermore, such moral conclusions seem to be an argument for autarky. This is similar to blaming a scale for the user's dietary choices. Some even take this train of thought a step further, claiming that the footprint denies the benefits of trade. Therefore such critics argue that the footprint can only be applied globally.[63] Others have made the opposite argument showing that national assessments do provide helpful insights.[64]

Since this metric tracks biocapacity, the replacement of original ecosystems with high-productivity agricultural monocultures can lead to attributing a higher biocapacity to such regions. For example, replacing ancient woodlands or tropical forests with monoculture forests or plantations may therefore decrease the ecological footprint. Similarly if organic farming yields were lower than those of conventional methods, this could result in the former being "penalized" with a larger ecological footprint.[65] Complementary biodiversity indicators attempt to address this. The WWF's Living Planet Report combines the footprint calculations with the Living Planet Index of biodiversity.[66] A modified ecological footprint that takes biodiversity into account has been created for use in Australia.[67]