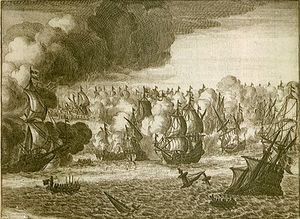 The Battle of Rullion Green in the Pentland Hills, in Lothian, Scotland on 28 November 1666 was the culmination of the brief Pentland Rising (15–28 November 1666). At least 3000 men of the Scottish Royal Army led by Tam Dalyell of the Binns opposed about 900 Covenanter rebels.