In 1593, the Yehe called upon a coalition of nine tribes: the Hada, Ula, Hoifa, Khorchin Mongols, Sibe, Guwalca, Jušeri, Neyen, and the Yehe themselves to attack the Jianzhou Jurchens. The coalition was defeated at the Battle of Gure and Nurhaci emerged victorious.[1]

From 1599 to 1618, Nurhaci set out on a campaign against the four Hulun tribes. He began by attacking the Hada in 1599 and conquering them in 1603. Then in 1607, Hoifa was also conquered with the death of its beile Baindari, followed by an expedition against Ula and its beile Bujantai in 1613, and finally the Yehe and its beile Gintaisi at the Battle of Sarhu in 1619.

In 1599, Nurhaci gave two of his translators, Erdeni Baksi ('Jewel Teacher' in Mongolian) and Dahai Jargūci,[2] the task of creating a Manchu alphabet by adapting the Mongolian script.

In 1606, he was granted the title of Kundulun Khan by the Mongols. 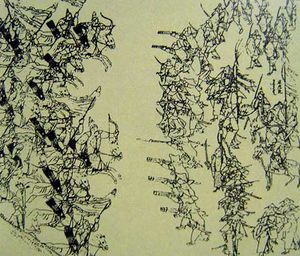 In 1616, Nurhaci declared himself Khan and founded the Jin dynasty (aisin gurun), often called the Later Jin in reference to the legacy of the earlier Jurchen Jin dynasty of the 12th century. He constructed a palace at Mukden (present-day Shenyang, Liaoning). The "Later Jin" was renamed to "Qing" by his son Hong Taiji after his death in 1626, however Nurhaci is usually referred to as the founder of the Qing dynasty.

In order to help with the newly organized administration, five of his trusted companions were appointed as his chief councilors, Anfiyanggū, Eidu, Hūrhan, Fiongdon, and Hohori.

Nurhaci chose to variously emphasize either differences or similarities in lifestyles with other peoples like the Mongols for political reasons.[3] Nurhaci said to the Mongols that "The languages of the Chinese and Koreans are different, but their clothing and way of life is the same. It is the same with us Manchus (Jurchen) and Mongols. Our languages are different, but our clothing and way of life is the same." Later Nurhaci indicated that the bond with the Mongols was not based in any real shared culture, rather it was for pragmatic reasons of "mutual opportunism", when he said to the Mongols: "You Mongols raise livestock, eat meat and wear pelts. My people till the fields and live on grain. We two are not one country and we have different languages."[4]

When the Jurchens were reorganized by Nurhaci into the Eight Banners, many Manchu clans were artificially created as a group of unrelated people founded a new Manchu clan (mukun) using a geographic origin name such as a toponym for their hala (clan name).[5] The irregularities over Jurchen and Manchu clan origin led to the Qing trying to document and systematize the creation of histories for Manchu clans, including manufacturing an entire legend around the origin of the Aisin Gioro clan by taking mythology from the northeast.[6]

In 1618, Nurhaci commissioned a document entitled the Seven Grievances in which he enumerated seven problems with Ming rule and began to rebel against the domination of the Ming dynasty. A majority of the grievances dealt with conflicts against Yehe, and Ming favouritism of Yehe.

Nurhaci led many successful engagements against the Ming Chinese, the Koreans, the Mongols, and other Jurchen clans, greatly enlarging the territory under his control.

The first capitals of the state established by Nurhaci were Fe Ala and Hetu Ala.[7][8][9][10][11] Han Chinese participated in the construction of Hetu Ala, the capital of Nurhaci's state.[12]

Defectors from the Ming side played a massive role in the Qing conquest of the Ming. Ming generals who defected to the Manchus were often married to women from the Aisin Gioro clan while lower-ranked defectors were given non-imperial Manchu women as wives. Nurhaci arranged for a marriage between one of his granddaughters and the Ming general Li Yongfang (李永芳) after Li surrendered Fushun in Liaoning to the Manchus in 1618 as the result of the Battle of Fushun.[13][14][15][16][17] His son Abatai's daughter was married to Li Yongfang.[18][19][20][21] The offspring of Li received the "Third Class Viscount" (بالصينية: 三等子爵; پن‌ين: sān děng zǐjué) title.[22] Li Yongfang was the great great great grandfather of Li Shiyao 李侍堯.[23][24]

The Han prisoner of war Gong Zhenglu (Onoi) was appointed to instruct Nurhaci's sons and received gifts of slaves, wives, and a domicile from Nurhaci after Nurhaci rejected offers of payment to release him back to his relatives.[25]

Nurhaci had treated Han in Liaodong differently according to how much grain they had, those with less than 5 to 7 sin were treated like chattel while those with more than that amount were rewarded with property. Due to a revolt by Han in Liaodong in 1623, Nurhachi, who previously gave concessions to conquered Han subjects in Liaodong, turned against them and ordered that they no longer be trusted and enacted discriminatory policies and killings against them, while ordering that Han who assimilated to the Jurchen (in Jilin) before 1619 be treated equally as Jurchens were and not like the conquered Han in Liaodong.

بحلول مايو 1621، كان نورحاجي قد فتح مدينتي لياويانگ وشن‌يانگ. In April 1625, he designated Shenyang the new capital city, which would hold that status until the Qing conquest of the Ming in 1644.[26] 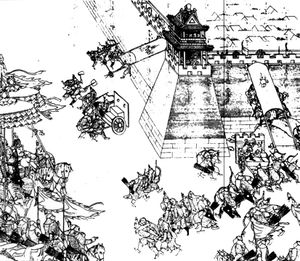 Finally in 1626, Nurhaci suffered the first serious military defeat of his life at the hands of the Ming general Yuan Chonghuan. Nurhaci was wounded by the Portuguese-made cannons in Yuan's army at the معركة نينگ‌يوان. Unable to recover either physically or mentally, he died two days later in Aiji Fort (靉雞堡; in present-day Da'aijinbao Village, Dijia Township, Yuhong District, Shenyang) on 30 September at the age of 67. His tomb, Fu Mausoleum (بالصينية: 福陵; پن‌ين: Fúlíng)، تقع شرق شن‌يانگ.

The first Manchu translations of Chinese works were the Six Secret Teachings (六韜), Sushu 素書, and Three Strategies of Huang Shigong (三略), all Chinese military texts dedicated to the arts of war due to the Manchu interests in the topic, like Sun-Tzu's work The Art of War.[27][28] The military related texts which were translated into Manchu from Chinese were translated by Dahai.[29]

Manchu translations of Chinese texts included the Ming penal code and military texts were performed by Dahai.[30] These translations were requested of Dahai by Nurhaci.[31] The military text Wuzi was translated into Manchu along with The Art of War.[32] 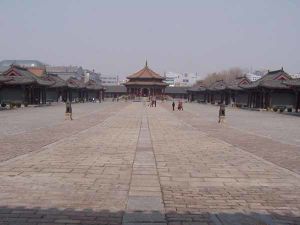 Among the most lasting contributions Nurhaci left his descendants was the establishment of the Eight Banners, which would eventually form the backbone of the military that dominated the Qing Empire. The status of Banners did not change much over the course of Nurhaci's lifetime, nor in subsequent reigns, remaining mostly under the control of the royal family. The two elite Yellow Banners were consistently under Nurhaci's control. The two Blue Banners were controlled by Nurhaci's brother Šurhaci until he died, at which point the Blue Banners were given to Šurhaci's two sons, Chiurhala and Amin. Nurhaci's eldest son, Cuyen, controlled the White Banner for most of his father's reign until he rebelled. Then the Bordered White Banner was given to Nurhaci's grandson and the Plain White was given to his eighth son and heir, Hong Taiji. However, by the end of Nurhaci's reign, Hong Taiji controlled both White Banners. Finally, the Red Banner was run by Nurhaci's second son Daišan. Later in Nurhaci's reign, the Bordered Red Banner was handed down to his son. Daišan and his son would continue holding the two Red Banners well into the end of Hong Taiji's reign. 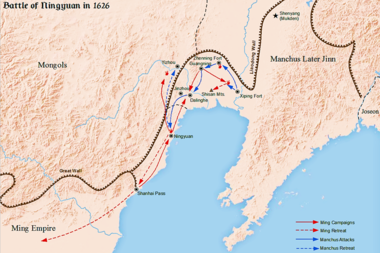 The details of Hong Taiji's succession as the Khan of the Later Jin dynasty are unclear.[33] When he died in late 1626, Nurhaci did not designate an heir; instead he encouraged his sons to rule collegially.[34] Three of his sons and a nephew were the "four senior beiles": Daišan (43 years old), Amin (son of Nurhaci's brother Šurhaci; 40 or 41), Manggūltai (38 or 39), and Hong Taiji himself (33).[35] On the day after Nurhaci's death, they coerced his primary consort Lady Abahai (1590–1626) – who had borne him three sons: Ajige, Dorgon, and Dodo – to commit suicide to accompany him in death.[36] This gesture has made some historians suspect that Nurhaci had in fact named the fifteen-year-old Dorgon as a successor, with Daišan as regent.[37] By forcing Dorgon's mother to kill herself, the princes removed a strong base of support for Dorgon. The reason such intrigue was necessary is that Nurhaci had left the two elite Yellow Banners to Dorgon and Dodo, who were the sons of Lady Abahai. Hong Taiji exchanged control of his two White Banners for that of the two Yellow Banners, shifting their influence and power from his young brothers onto himself.[بحاجة لمصدر]

According to Hong Taiji's later recollections, Amin and the other beile were willing to accept Hong Taiji as Khan, but Amin then would have wanted to leave with his Bordered Blue Banner, threatening to dissolve Nurhaci's unification of the Jurchens.[38] Eventually the older Daišan worked out a compromise that allowed Hong Taiji as the Khan, but almost equal to the other three senior beiles.[39] Hong Taiji would eventually find ways to become the undisputed leader.

The change of the name from Jurchen to Manchu by Hong Taiji was made to hide the fact that the ancestors of the Manchus, the Jianzhou Jurchens, were ruled by the Chinese.[40][41][42] The Qing dynasty carefully hid the two original editions of the books of "Qing Taizu Wu Huangdi Shilu" and the "Manzhou Shilu Tu" (Taizu Shihlu Tu) in the Qing palace, forbidden from public view because they showed that the Manchu Aisin Gioro family had been ruled by the Ming dynasty.[43][44] In the Ming period, the Koreans of Joseon referred to the Jurchen-inhabited lands north of the Korean peninsula, above the rivers Yalu and Tumen, as part of Ming China, which they called the "superior country" (sangguk).[45]

The Jiu Manzhou Dang from Nurhaci's reign also survives. A revised transcription of these records (with the dots and circles added to the script) was commissioned by the Qianlong Emperor. This has been translated into Japanese under the title Manbun roto, and Chinese, under the title Manwen Laodang (بالصينية: 满文老檔). A project is currently under way at Harvard University to translate them into English, as The Old Manchu Chronicles.[46]

According to the account of Korean ambassadors, Nurhaci was a physically strong man with a long and stern-looking face and that his nose was straight and big, and just like most of the other Manchu men, he shaved most of his facial hair and kept only his moustache.