On the day of Mustafa's death on 21 January 1774 , Abdul Hamid ascended to the throne with a ceremony held in the palace. The next day Mustafa III's funeral procession was held. The new sultan sent a letter to the Grand Vizier and Serdar-ı Ekrem Muhsinzade Mehmed Pasha on the front and informed him to continue his duty. On 27 January 1774, the sword was armed in Eyup Sultan. At the time, the Ottoman-Russian front wars continued, the army was at once, and there was a shortage of food in Istanbul. [3]

Abdul Hamid's long imprisonment had left him indifferent to state affairs and malleable to the designs of his advisors.[بحاجة لمصدر] Yet he was also very religious and a pacifist by nature. At his accession the financial straits of the treasury were such that the usual donative could not be given to the Janissary Corps. The new Sultan told the Janissaries "There are no longer gratuities in our treasury, as all of our soldier sons should learn." 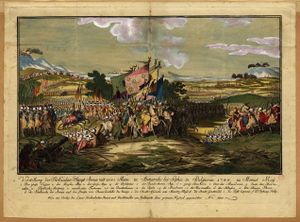 The Ottoman Army advances from Sofia, its largest garrison in Rumelia, in the year 1788.

Abdul Hamid now sought to reform the Empire's armed forces. He enumerated the Janissary corps and tried to renovate it, and also the navy. He established a new artillery corps. He was also credited with the creation of the Imperial Naval Engineering School.[1]

Abdul Hamid tried to strengthen Ottoman rule over Syria, مصر, and Iraq.[1] However, slight successes against rebellions in Syria and the Morea could not compensate for the loss of the Crimean Peninsula, which had become nominally independent in 1774, but was in practice now controlled by Russia.

Russia repeatedly exploited its position as protector of Eastern Christians to interfere in the Ottoman Empire, and explicitly. Finally the Ottomans declared war against Russia in 1787. Austria soon joined Russia. Turkey held its own in the conflict, at first, but on 6 December 1788, Ochakov fell to Russia (all of its inhabitants being massacred). It is said that this sad defeat broke Abdul Hamid's spirit, as he died four months later.

In spite of his failures, Abdul Hamid was regarded as the most gracious Ottoman Sultan.[بحاجة لمصدر] He personally directed the fire brigade during the Constantinople fire of 1782. He was admired by the people for his religious devotion, and was even called a Veli ("saint"). He also outlined a reform policy, supervised the government closely, and worked with statesmen.

Abdul Hamid I turned to internal affairs after the war with Russia ended in this way. He tried to suppress internal revolts through Algerian Gazi Hasan Pasha, and to regulate the reform works through Silâhdar Seyyid Mehmed Pasha (Karavezir) and Halil Hamid Pasha.

Especially in Syria, the rebellion of Zahir al-Omar, who cooperated with the admirals of the Russian navy in the Mediterranean, benefiting from the confusion caused by the Russian expedition of the 1768 Russian campaign, and suppressed the rebellion in Egypt in 1775, as well as the Kölemen who were in rebellion in Egypt, was brought to the road. On the other hand, the confusion in Peloponnese was ended, and calm was achieved. Kaptanıderyâ Gazi Hasan Pasha and Cezzâr Ahmed Pasha played an important role in suppressing all these events. [4]

Despite his pacific inclinations, the Ottoman Empire was forced to renew the ongoing war with Russia almost immediately. This led to complete Turkish defeat at Kozludzha and the humiliating معاهدة كوچوك كاينارجا, signed on 21 July 1774. The Ottomans ceded territory to Russia, and also the right to intervene on behalf of the Orthodox Christians in the Empire.

بمعاهدة كوچوك كاينارجا، the territory left, as well as Russia's ambassador at Istanbul level and an authorized representative, this ambassador's participation in other ceremonies at the state ceremonies, the right to pass through the Straits to Russia, as the envoys of the Russian envoy were given immunity. Marketing opportunities for all kinds of commodities in Istanbul and other ports, as well as the full commercial rights of England and France were given. It was also in the treaty that the Russian state had a church built in Galata. Under the circumstances, this church would be open to the public, referred to as the Russo-Greek Church, and forever under the protection of Russian ambassadors in Istanbul. [5]

In 1789, Tipu Sultan, ruler of the Sultanate of Mysore sent an embassy to Abdul Hamid, urgently requesting assistance against the British East India Company, and proposed an offensive and defensive alliance. Abdul Hamid informed the Mysori ambassadors that the Ottomans were still entangled and exhausted from the ongoing war with Russia and Austria.[بحاجة لمصدر]

Abdul Hamid I left many architectural works, mostly in Istanbul. The most important of these is the current in Sirkeci in 1777. It is the building built by the Vakıf Inn. He built a fountain, an elementary school, a madrasah and a library next to this building. The books in the library are kept in the Süleymaniye Library today and the madrasah is used as a stock exchange building. During the construction of the Vakıf Inn, the fountain was removed by construction and the fountain was transferred to the corner of Zeynep Sultan Mosque opposite Gülhane Park. [4]

In addition to these works, in 1778, he built a mosque with a mosque on the beach of Beylerbeyi on behalf of Râbia Şermi Kadın, and built fountains in Çamlıca Kısıklı Square, other than places such as İskele Square, Çınarönü, Havuzbaşı and Car Square. In addition, he had the Beylerbeyi Mosque substantially repaired, built a mosque, a fountain and a bath and shops around Emirgi in Emirgân in 1783, and another one for Hümâşah Sultan and his son Mehmed. The fountain has been built more. In addition to these, there is a fountain next to Neslişah Mosque in Istinye, and another fountain on the embankment between Dolmabahçe and Kabataş. [4]

He wrote down the troubles he saw before, to the grand vizier or to the governor of his empire. He accepted the invitations of the and his grand vizier and went to his mansions, followed by the reading of Quran. He was humble and a religious Sultan.[6]

It is known that Abdul Hamid I was fond of his children, was interested in family life, spent the summer months in Karaağaç, Beşiktaş with his consorts, sons and daughters. His daughter Esma Sultan's dressing styles, her passion for entertainment, her journey to the objects with her journeymen and concubines have set an example for Istanbul ladies.[7]

Abdul Hamid had married all of his consorts. He had made marriage of conscience because there were grounds for believing that the women in question had been born Muslims. In each case the sultan declared the girl to be free and repeated the marriage vow in her behalf before the Şeyhülislam, but did this without pomp.[8] His nine wives were:

Abdul Hamid had adopted two daughters when he was a prince: 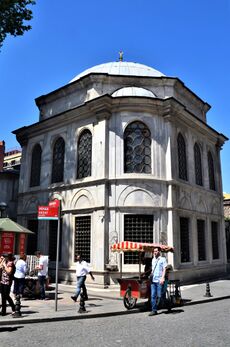 Tomb of Abdul Hamid I in Eminönü quarter of Fatih, Istanbul.

Abdul Hamid died on 7 April 1789, at the age of sixty-four, in Constantinople. He was buried in Bahcekapi, a tomb he had built for himself.

He bred Arabian horses with great passion. One breed of Küheylan Arabians was named "Küheylan Abdülhamid" after him.