Ghazi Amanullah Khan (Pashto: غازي امان الله خان‎code: ps is deprecated , Dari: غازی امان الله خان‎code: prs is deprecated ; 1 June 1892 – 25 April 1960) was the sovereign of Afghanistan from 1919 until his abdication in 1929, first as Emir and after 1926 as King.[1] After the August 1919 end of the Third Anglo-Afghan War, Afghanistan was able to relinquish its protected state status to proclaim independence and pursue an independent foreign policy free from the influence of the United Kingdom.[2]

His rule was marked by dramatic political and social change, attempting to modernize Afghanistan on Western designs, which he did not fully succeed in, due to an uprising by Habibullah Kalakani and his followers. On 14 January 1929, Amanullah abdicated and fled to neighbouring British India as the Afghan Civil War began to escalate. From British India, he went to Europe, where after 30 years in exile, he died in Italy, in 1960 (yet apparently and reportedly according to the Encyclopaedia Britannica, Amanullah would have died in Zürich in Switzerland). His body was brought to Afghanistan and buried in Jalalabad.[3]

Amanullah Khan was born on 1 June 1892, in Paghman near Kabul, Afghanistan. He was the third son of the Emir Habibullah Khan. Amanullah was installed as the governor of Kabul and was in control of the army and the treasury, and gained the allegiance of most of the tribal leaders.[4]

Russia had recently undergone its Communist revolution, leading to strained relations between the country and the United Kingdom. Amanullah Khan recognized the opportunity to use the situation to gain Afghanistan's independence over its foreign affairs. He led a surprise attack against the British in India on 3 May 1919, beginning the Third Anglo-Afghan war.[5] After initial successes, the war quickly became a stalemate as the United Kingdom was still dealing with the costs of World War I. An armistice was reached towards end of 1919, and Afghanistan was completely free of British diplomatic influence.[6]

In February 1919, Emir Habibullah Khan went on a hunting trip to Afghanistan's Laghman Province. Among those in his retinue were Nasrullah Khan, Habibullah's first son Inayatullah, and Habibullah's commander-in-chief Nadir Khan. On the evening of February 20, 1919, Habibullah was assassinated while in his tent by Shuja ud-Dawla, one of the pages who slept in his tent, on orders from his younger son, Amanullah, leaving Nasrullah the heir successor to the Afghan throne. Nasrullah at first refused to take the throne and declared his allegiance to Inayatullah, Habibullah's first born. Inayatullah refused and said that his father had made Nasrullah the heir rightfully and wanted him to become Emir. All the local tribes people also gave their allegiance to Nasrullah, who was a pious and religious man.[7]

The remainder of Habibullah's party journeyed south-east to Jalalabad, and on February 21, 1919 reached that city, whereupon Nasrullah was declared Emir, supported by Habibullah's first son Inayatullah.[8]

Upon receiving the news, Amanullah Khan, third son of Habibullah by Habibullah's first wife, had remained in Kabul as the king's representative. Using this opportunity, he immediately seized control of the treasury at Kabul and staged a coup against his uncle.[9] He took control of Kabul and the central government, declaring war against Nasrullah. Nasrullah did not want any blood shed in order for him to be king. He told Amanullah that he can have the kingdom, and he will take exile in Saudi Arabia. Amanullah Khan swore upon the Quran that no harm would come to Nasrullah if he returned to Kabul and then he can do as he pleased. Fearing that Nasrullah's supporters would rise against Amanullah, he went against his word and imprisoned Nasrullah and his supporters. On February 28, 1919, Amanullah proclaimed himself Emir,[8] and on March 3, 1919 Nasrullah was arrested by Amanullah's forces.[10]

On April 13, 1919, Amanullah held a Durbar (a royal court under the supervision of Amanullah) in Kabul which inquired into the death of Habibullah. It found a colonel in the Afghanistan military guilty of the crime, and had him executed. On manufactured evidence, it found Nasrullah complicit in the assassination.[8] He imprisoned Nasrullah to life imprisonment[11] and had him assassinated approximately one year later while in the royal jail.[10] 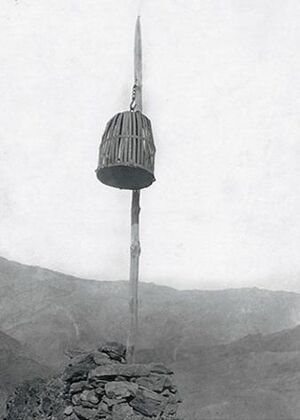 By 1921, banditry was dramatically curtailed in Afghanistan by harsh punishment, such as being imprisoned in suspended cages and left to die.

Amanullah enjoyed early popularity within Afghanistan and he used his influence to modernise the country. Amanullah created new cosmopolitan schools for both boys and girls in the region and overturned centuries-old traditions such as strict dress codes for women.[12] He increased trade with Europe and Asia. He also advanced a modernist constitution that incorporated equal rights and individual freedoms with the guidance of his father-in-law and Foreign Minister Mahmud Tarzi.[13] His wife, Queen Soraya Tarzi played a huge role in regard to his policy towards women. This rapid modernisation created a backlash and a reactionary uprising known as the Khost rebellion which was suppressed in 1925. He also met with many followers of the Baháʼí Faith in India and Europe, from where he brought back books that are still to be found in the Kabul Library.[14] This association later served as one of the accusations when he was overthrown.[15]

At the time, Afghanistan's foreign policy was primarily concerned with the rivalry between the Soviet Union and the United Kingdom, the so-called Great Game. Each attempted to gain the favor of Afghanistan and foil attempts by the other power to gain influence in the region. This effect was inconsistent, but generally favourable for Afghanistan; Amanullah established a limited Afghan Air Force consisting of donated Soviet planes.[16] 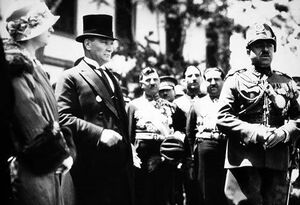 Amanullah travelled to Europe in late 1927.[17] The Afghan King and Queen set out from Karachi and en route they met with King Fawad of Egypt in Cairo. They undertook a whirlwind European visit: Italy, arrival on 8 January 1928, where they met with King Victor-Emanuel III of Italy along with his Prime Minister, Benito Mussolini and Pope Pius XI in the Vatican City; France, arrival in Nice on 22 January 1928, in Paris on 25 January, meeting with President Doumergue; Belgium, arrival on Brussels on 8 February, meeting with King Albert I and Queen Elisabeth of Belgium. The next stop was Germany. The germanophile king arrived via Germany in Berlin on 22 February to meet President Paul von Hindenburg the same day. Next he travelled to Great Britain as guests of King George V and Queen Mary. The steam ship SS Maid of Orleans arrived in Dover on 13 March. The royal couple left England on 5 April to Poland. On their way, they had a longer stopover in Berlin where the Amir underwent an emergency tonsillectomy. The royal train with the Amir back on board arrived in the Polish border town of Zbąszyń on April, 28. The next day it pulled into Warsaw to be met by Polish ministers, the speaker of the Sejm and the country's president Ignacy Mościcki. At his request Amanullah was granted a possible audience with the First Marshal of Poland Józef Piłsudski. The Afghan party departed from Warsaw travelling east across the country to the border with the Soviet Union on 2 May 1928.[18]

During Amanullah's visit to Europe, opposition to his rule increased to the point that an uprising in Jalalabad culminated in a march to the capital, and much of the army deserted rather than resist. In January 1929, Amanullah abdicated and went into temporary exile in then British India. His brother Inayatullah Khan became the next king of Afghanistan for a few days until Habibullah Kalakani, a leader of the "Saqqawists" opposition movement, took over. While in India, Kalakani battled anti-Saqqawist tribes. Around 22 March, Amanullah returned to Afghanistan assembling forces in Kandahar to reach Kabul and dispose of Kalakani. However his forces failed to advance and on 23 May 1929 he fled to India again, this time never to return to his country.[19]

Kalakani's nine months rule was soon replaced by Nadir Khan on 13 October 1929. Amanullah Khan attempted to return to Afghanistan, but he had little support from the people. From British India, the ex-king traveled to Europe and settled in Italy, buying a villa in Rome's Prati neighborhood. Meanwhile, Nadir Khan made sure his return to Afghanistan was impossible by engaging in propaganda. Most of his reforms had been reversed, but the later King, Mohammad Zahir Shah, made a more gradual program of reform.[20]

Nevertheless, he still had a group of staunch supporters in Afghanistan. These Amanullah loyalists unsuccessfully attempted several times in the 1930s and 1940s to bring him back to power.[21]

In 1941, some press in the west reported that Amanullah was now working as an agent for Nazi Germany in Berlin.[22] It is believed he was involved in plans to regain his throne with Axis help,[23] despite Afghanistan's neutrality. However following the Axis loss in Stalingrad in 1943, the plans were abandoned.[24] 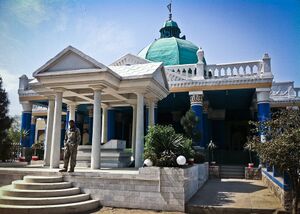 Mausoleum of Amanullah Khan in Jalalabad

After fleeing to India, King Amanullah Khan sought asylum in Italy because he was given the Order of the Annunciation by King Victor Emmanuel III on his world tour. He eventually died in the year 1960, according to some reports either in Italy or, according to some other reported sources, Zürich, Switzerland. His body was brought to Afghanistan and buried in the eastern city of Jalalabad. He left behind his widowed wife and four sons and five daughters, including Princess India of Afghanistan.[25]