ترايان باسسكو (Traian Băsescu ؛ النطق بالرومانية: [traˈjan bəˈsesku]؛ وُلِد 4 نوفمبر 1951) هو سياسي روماني، كان رئيس رومانيا الرابع من 2004 إلى 2014. His two consecutive terms in office are marked by the adhesion of Romania to the European Union in 2007, but also open conflicts with the Parliament, leading to two failed impeachments attempts against him in 2007 and 2012.[4] On 9 June 2016 President Nicolae Timofti signed the decree granting Basescu and his wife Maria the citizenship of the Republic of Moldova.

وُلِد باسسكو ترايان في بسرابي، (تغير اسمها إلى مورفتلار في 2007)، بالقرب من مدينة كونستانزا، أكبر مياء روماني على البحر الأسود. Băsescu's father, Dumitru (d. 2002), was an army officer; his mother's first name was Elena (d. 2010). He has a brother, Mircea (و. 1953), who was charged with influence peddling (in exchange for €250,000 he promised freedom to the president's godson Florin Anghel, an underworld member). He was sentenced to four years in prison only after his brother's mandate ended. Traian Băsescu and his wife Maria have two daughters: Ioana (b. 1977), a notary, and Elena (و. 1980), a Romanian former MEP.

Băsescu graduated from the Naval Institute of Constanța in 1976 and became a merchant marine deck officer at Navrom, the Romanian state-owned shipping company. Between 1981 and 1987 he served as captain on Romanian commercial ships. Throughout his career, questions have been raised about Băsescu's links to the Securitate, the security services of the communist leader Nicolae Ceaușescu.[5] But Băsescu has said his links with the former Securitate were minimal, though some contact was obligatory at the time for somebody working abroad in a senior position.[6] In 1984 he was promoted to Captain of the oil tanker Biruința, the largest ship of the then Romanian commercial fleet. In 1989, Băsescu moved to Belgium to head the Navrom Agency in Antwerp.[6]

The most controversial episode of his professional career is the disaster that happened on 10 September 1981 in the French port Rouen, when a fire started around the Romanian tanker Argeș, then under the command of Traian Băsescu, affecting a large portion of the river Seine. The fire destroyed two pusher ships and six barges, a major disaster being avoided on the last moment when 70 French firemen coming from Rouen, Gran-Couronne, Grand-Quevily, Canteleu and Moulineaux prevented the fire from reaching the nearby Shell refinery. According to an interview given by Traian Băsescu to the Romanian TV channel Prima TV on 23 June 1998 (and quoted by "Magazin Nautic", the official publication of the Romanian Nautical Club), Băsescu admitted to having made alterations to the ship's installation before the French investigators were allowed to come on board, a thing that—in Băsescu own words—made it impossible for the investigators to link the cause of the disaster to the Romanian ship.[7]

Băsescu was a member of the Communist Party before 1989.[8] After the downfall of Communism, he claimed that he joined the PCR only in order to promote his career in the merchant marine.[بحاجة لمصدر] In a letter published in Romanian newspapers, former president Emil Constantinescu alleged that Băsescu was in the second tier of the Communist Party leadership during the regime of former communist leader Nicolae Ceaușescu, but had managed to portray himself as anti-communist.[6] During an interview Traian Basescu admitted that before 1989 he smuggled jeans and other goods. A former communist official, director of a firm that was receiving the goods transported by Traian Basescu ship, said at Antena 3 that without bribes Traian Basescu refused to bring the goods in the country.

Traian Băsescu entered politics after the 1989 Romanian Revolution, as a member of the large National Salvation Front (FSN) party. In April 1991, he became Minister of Transport in Petre Roman's Cabinet, and continued to hold this position during Theodor Stolojan's "Cabinet of technocrats" in September 1991 – November 1992. In 1992, after the FSN split in two factions—the Social Democratic Party of Romania (PDSR, later PSD), led by Ion Iliescu, and the Democratic Party (PD), led by Petre Roman, Băsescu joined the PD faction. In 1992, he was elected to the lower house of the Romanian Parliament, the Chamber of Deputies, then re-elected for the 1996–2000 term.

Concurrently with his second term in Parliament, from November 1996 to June 2000, Băsescu also served as Minister of Transport in the center-right governments of Victor Ciorbea, Radu Vasile, and Mugur Isărescu.[بحاجة لمصدر]

In domestic politics, Băsescu often has claimed he fights against high-level corruption. In spring 2005, Romania resolved a hostage crisis in Iraq involving three Romanian journalists and their guide.

In 2005, he also focused on pressing the government to provide relief to thousands of Romanians left homeless by widespread flooding throughout the spring and summer.

In addition, Băsescu has focused on a strong strategic partnership with the الولايات المتحدة, a relationship which during the 2004 presidential campaign he called the "Bucharest-London-Washington axis". In real terms, this meant a continued commitment to maintain Romanian troops in Afghanistan and a smaller contingent in Iraq; and an agreement signed in December 2005 between Romania and the U.S. to allow U.S. troops to use a Romanian military facility (Mihail Kogălniceanu International Airport). Băsescu is singled out in a report by an investigator of the Council of Europe on illegal activities of the US secret service CIA in Europe, Dick Marty, as one of the persons who authorized or at least knew about and must stand accountable for the black site at the Mihail Kogălniceanu military base from 2003 to 2005.[9] Băsescu made strong ties with the President of the United States, who in return called him a friend: "The President and I are friends. Romania and the United States are friends, and we're allies".

In June 2006, Băsescu came into open conflict with Popescu-Tăriceanu after the Prime Minister and the Defence Minister announced that they and the PNL sought to withdraw Romania's troops from Iraq. However, the troops stayed in Iraq, after Băsescu called a meeting of the Supreme Defense Council, which voted that the troops should stay.[10] 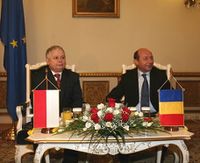 Băsescu has been vocal in calling for a regional approach to security in the Black Sea basin, which he noted remained susceptible to trans-border security threats such as drug and human trafficking. Băsescu alleged "that Russia might have been involved in his suspension", citing his pro-Western foreign policy as a reason.[11]

Băsescu has tried to improve Romania's relations with Moldova, with which Romania shares a common language and culture. Furthermore, he has expressed several times his belief in the future unification of the two countries, either politically or in the framework of the European Union. His player attitude has brought some practical success, but also an increase in anti-Romanian rhetoric from the Communist government of Moldova, led by Vladimir Voronin. A divisive issue remains to this day the opening of two Romanian consulates outside the capital of Moldova, as well as 900,000 Moldovans applying for Romanian citizenship. In both cases, Băsescu strongly supported moves to strengthen relations with Moldova, while the Moldovan Communist leadership sought to cool down Băsescu's energy.

Băsescu stated that Romania regards Kosovo as an integral part of Serbia, as an outcome of the Kosovo status process, and that Romania will not recognize any unilateral declaration of independence by Kosovo.[12][13]

Romania formally terminated its mission in Iraq on 4 June 2009, and pulled out its troops. On 23 July the last Romanian soldiers left Iraq.[14] Three Romanian soldiers had been killed during their mission, and at least eight were wounded. 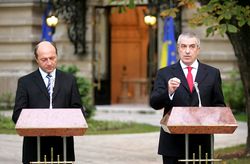 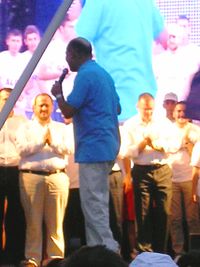