The Ox (牛) is the second of the 12-year periodic sequence (cycle) of animals which appear in the Chinese zodiac related to the Chinese calendar, and also appears in related calendar systems. The Chinese term translated here as ox is in Chinese niú (牛), a word generally referring to cows, bulls, or neutered types of the bovine family, such as common cattle or water buffalo. The zodiacal ox may be construed as male, female, neuter, and either singular or plural. The Year of the Ox is also denoted by the Earthly Branch symbol chǒu (丑). The term "zodiac" ultimately derives from an Ancient Greek term referring to a "circle of little animals". There are also a yearly month of the ox and a daily hour of the ox (Chinese double hour, 1:00 a.m. to 3:00 a.m.). Years of the oxen (cows) are cyclically differentiated by correlation to the Heavenly Stems cycle, resulting in a repeating cycle of five years of the ox/cow (over a sixty-year period), each ox/cow year also being associated with one of the Chinese wǔxíng, also known as the "five elements", or "phases": the "Five Phases" being Fire (火 huǒ), Water (水 shuǐ), Wood (木 mù), Metal (金 jīn), and Earth (土 tǔ). The Year of the Ox follows after the Year of the Rat (the first year of the zodiacal cycle) and it then is followed by the Year of the Tiger. Twelve jade figurines from China representing the zodiacal "circle of small animals", beginning with the rat (left front), and then going clockwise to the next figure on the left (the ox) and then continuing clockwise around to the pig (right front)

The meaning of zodiacal in the case of the Zodiacal Ox derives from Ancient Greek. There are similarities and differences with the concept of zodiac in Western Astrology.

The meaning of zodiac derives from zōdiacus, the Latinized form of the Ancient Greek zōdiakòs kýklos (ζῳδιακός κύκλος), meaning "cycle/circle of little animals". The term "zodiacal" refers to the classification scheme based on the lunar calendar that assigns an animal and its reputed attributes to each year in a repeating 12-year cycle. The 12 year cycle is an approximation to the 11.85-year orbital period of Jupiter.[1] Originating from China, this form of the zodiac (with some variations) have been popular for a long time in many East Asian countries, such as Japan,[2] South Korea,[3] Vietnam,[3] Cambodia,[4] and Thailand.[5]

The term "zodiac" reflects similarities and differences with the Western zodiac. Both similarly have cycles divided into twelve parts, with at least the majority of those parts with named for animals, and each is widely associated with an ascription of a person's personality or events in their life to a supposed influence of the person's particular relationship to the cycle. A major difference between the two is that the animals of the Chinese zodiac are not associated with constellations spanned by the ecliptic plane (that is, the part of the sky through which the Sun appears to move from the perspective of Earth). The Chinese/East Asian 12-part cycle corresponds to years, rather than months.

The ox of the Chinese zodiac has a long history. In Chinese mythology, many myths about oxen or ox-like entities include celestial and earthly beings. The myths range from ones which include oxen or composite beings with ox characteristics as major actors to ones which focus on human or divine actors, in which the role of the oxen are more subsidiary. In some cases, Chinese myths focus on oxen-related subjects, such as plowing and agriculture or ox-powered carriage. Another important role for beef cattle is in the religious capacity of sacrificial offerings. Chinese mythology intersects with the idea of the zodiacal ox.

According to some old mythological traditions there was a race held by a great deity to determine which creatures, in which order, would be the namesakes of the twelve-year cycle. The race was run, and swum, the finishing line being across a great river. The Rat and the Ox crossed easily enough, the Ox due to being large, powerful, and adept both on land and in water: the Rat asked the good-natured Ox for a ride on its back, but then ungratefully jumped off at the last minute to cross the finish line first. 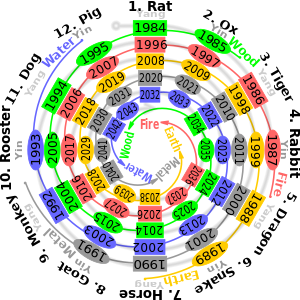 People born within these date ranges can be said to have been born in the "Year of the Ox", while bearing the following elemental phase sign:[6][7]

In traditional Chinese astrology as well as traditional Chinese astronomy the sky was mapped into various asterisms or what are sometimes referred to as Chinese constellations. This is actually more similar to the zodiac of Western astrology than is the 12 animal cycle. The stars along the plane of the ecliptic divide into groups known as the Twenty-Eight Mansions. Because the moon during its monthly cycle could be observed to appear to move from one mansion (or "camp") into the next each night in turn, they are also known as Lunar Mansions. Traditionally, these mansions were divided into four groups of seven each, and associated with one of four spiritual entities. This is applicable to the Year of the Ox, Chǒu (丑), a sign linked to the celestial region of the Black Warrior, or Xuánwǔ,[8] linked to the stars of Beta Capricorni, in modern astronomy. In the Vietnamese zodiac, the water buffalo occupies the position of the Ox. In Nepal, the Tamu/Gurung people celebrate the year of the cow.[10]

The Year of the Ox does not exactly correspond with years of the commonly used Gregorian calendar. For the 2021–2022 Gregorian time period, the Year of the Ox begins on 12 February 2021 and ends 31 January 2022. This is a year of the Metal Ox. Classical nomenclature uses the stem-branch reckoning for this year, xīn-chǒu (辛丑) of the sexagenary cycle.