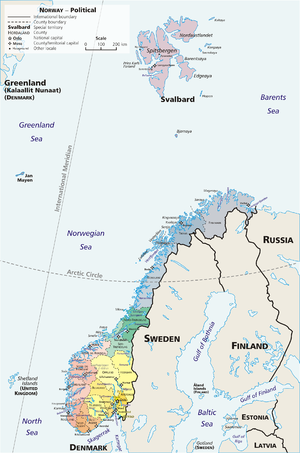 A geopolitical map of Norway, exhibiting its 18 first-order subnational divisions (fylker or "counties"), along with Svalbard and Jan Mayen

In 2017 the government decided to abolish the current counties and to replace them with fewer, larger administrative regions (regioner).[1]

Below is a list of the Norwegian counties, with their current administrative centres. Note that the counties are administered both by appointees of the national government and to a lesser extent by their own elected bodies. The county numbers are from the official numbering system ISO 3166-2:NO, which originally was set up to follow the coastline from the Swedish border in the southeast to the Russian border in the northeast, but with the numbering has changed with county mergers. The number 13, 16 and 17 were dropped, and the number 50 was added to account for changes over the years. The lack of a county number 13 is due to the city of Bergen no longer being its own county, and is unrelated to fear of the number 13. 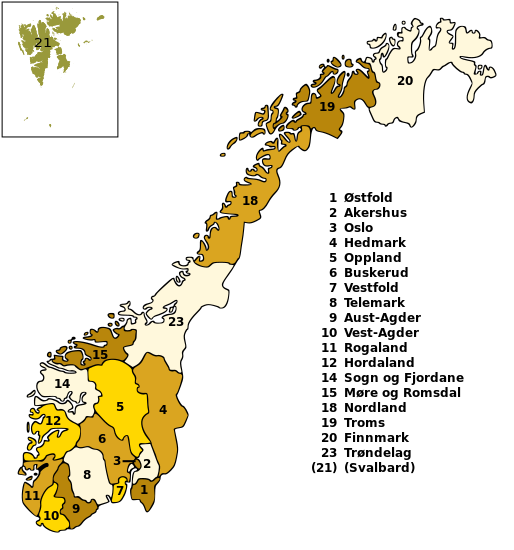 From the consolidation to a single kingdom, Norway was divided into a number of geographic regions that had its own legislative assembly or Thing, such as Gulating (Western Norway) and Frostating (Trøndelag). The second-order subdivision of these regions was into fylker, such as Egdafylke and Hordafylke. In 1914, the historical term fylke was brought into use again to replace the term amt introduced during the union with Denmark. Current day counties (fylker) often, but not necessarily, correspond to the historical areas.

Fylke in the 10th-13th centuries

Finnmark (including northern Troms), the Faroe Islands, the Orkney Islands, Shetland, the Hebrides, Isle of Man, Iceland and Greenland were Norwegian skattland ("tax countries"), and did not belong to any known counties or assembly areas.

From the end of the 12th century, Norway was divided into several syssel. The head of the various syssel was the syslemann, who represented the king locally. The following shows a reconstruction of the different syssel in Norway c. 1300, including sub-syssel where these seem established.[4]

From 1308, the term len (plural len) in Norway signified an administrative region roughly equivalent to today's counties. The historic len was an important administrative entity during the period of Dano-Norwegian unification after their amalgamation as one state, which lasted for the period 1536[5]–1814.

At the beginning of the 16th century the political divisions were variable, but consistently included four main len and approximately 30 smaller sub-regions with varying connections to a main len. Up to 1660 the four principal len were headquartered at the major fortresses Bohus Fortress, Akershus Fortress, Bergenhus Fortress and the fortified city of Trondheim.[6] The sub-regions corresponded to the church districts for the Lutheran church in Norway.

These four principal len were in the 1530s divided into approximately 30 smaller regions. From that point forward through the beginning of the 17th century the number of subsidiary len was reduced, while the composition of the principal len became more stable.[7]

Len written as län continues to be used as the administrative equivalent of county in Sweden to this day. Each len was governed by a lenman.[8]

With the royal decree of February 19, 1662, each len was designated an amt (plural amt) and the lenmann was titled amtmann, from German Amt (office), reflecting the bias of the Danish court of that period.[9]

After 1671 Norway was divided into four principal amt or stiftsamt and there were nine subordinate amt:

From 1730 Norway had the following amt:

At this time there were also two counties (grevskap) controlled by actual counts, together forming what is now Vestfold county:

From 1919 each amt was renamed a fylke (plural fylke(r)) (county) and the amtmann was now titled fylkesmann (county governor).

In 2017 the Norwegian government announced the merge of the existing 19 fylker into 11 fylkeskommuner (regions) by 2020. As a result, several government tasks will be transferred to the new regions.[12]