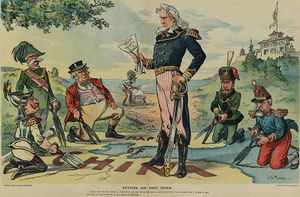 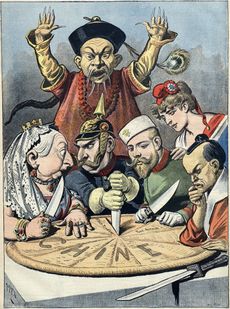 The century of humiliation (بالصينية: 百年耻辱), also known as the hundred years of national humiliation, is the term used in China to describe the period of intervention and perceived subjugation of the Chinese Empire by Western powers, Russia and Japan in between 1839 and 1949.[1]

The term arose in 1915, in the atmosphere of rising Chinese nationalism opposing the Twenty-One Demands made by the Japanese government and their acceptance by Yuan Shikai, with the Kuomintang and Chinese Communist Party both subsequently popularizing the characterization.

The beginning of the Century of Humiliation is usually dated to the mid-19th century, on the eve of the First Opium War[2] amidst widespread opium addiction and the political unraveling of Qing China that followed.[3]

Major events cited as part of the Century of Humiliation include:

In this period, China suffered major internal fragmentation, lost almost all of the wars it fought, and was often forced to give major concessions to the great powers in the subsequent treaties.[6] In many cases, China was forced to pay large amounts of reparations, open up ports for trade, lease or cede territories (such as Outer Manchuria and parts of Outer Northwest China to the Russian Empire, Jiaozhou Bay to Germany, Hong Kong to Great Britain, Zhanjiang to France, and Taiwan and Dalian to Japan) and make various other concessions of sovereignty to foreign "spheres of influence", following military defeats.

When or whether the Century has ended has been open to different interpretations. Both Chiang Kai-shek and Mao Zedong declared the end of the Century of Humiliation in the aftermath of World War II, with Chiang promoting his wartime resistance to Japanese rule and China's place among the Big Four in the victorious Allies in 1945, while Mao declared it with the establishment of the People's Republic of China in 1949.

Extraterritorial jurisdiction was abandoned by the United Kingdom and the United States in 1943. Chiang Kai-shek forced the French to hand over all their concessions back to China control after World War II.

The end of the Century was similarly declared in the repulsion of UN forces in the Korean War, the 1997 reunification with Hong Kong, the 1999 reunification with Macau, and even the hosting of the 2008 Summer Olympics in Beijing.[7]

The usage of the Century of Humiliation in the Chinese Communist Party's historiography and modern Chinese nationalism, with its focus on the "sovereignty and integrity of [Chinese] territory",[8] has been invoked in incidents such as the US bombing of the Chinese Belgrade embassy, the Hainan Island incident, and protests for Tibetan independence along the 2008 Beijing Olympics torch relay.[9] Some analysts have pointed to its use in deflecting foreign criticism of human rights abuses in China and domestic attention from issues of corruption, while bolstering its territorial claims and general economic and political rise.[7][10][11]

Jane E. Elliott criticized the allegation that China refused to modernize or was unable to defeat Western armies as simplistic, noting that China embarked on a massive military modernization in the late 1800s after several defeats, buying weapons from Western countries and manufacturing their own at arsenals, such as the Hanyang Arsenal during the Boxer Rebellion. In addition, Elliott questioned the claim that while Chinese society was traumatized by the Western victories, as many Chinese peasants (90% of the population at that time) living outside the concessions continued about their daily lives, uninterrupted and without any feeling of "humiliation".[12]

Historians have judged the Qing dynasty's vulnerability and weakness to foreign imperialism in the 19th century to be based mainly on its maritime naval weakness while it achieved military success against Westerners on land, the historian Edward L. Dreyer said that "China's nineteenth-century humiliations were strongly related to her weakness and failure at sea. At the start of the First Opium War, China had no unified navy and not a sense of how vulnerable she was to attack from the sea. British navy forces sailed and steamed wherever they wanted to go. In the Arrow War (1856–60), the Chinese had no way to prevent the Anglo-French navy expedition of 1860 from sailing into the Gulf of Zhili and landing as near as possible to Beijing. Meanwhile, new but not exactly modern Chinese armies suppressed the midcentury rebellions, bluffed Russia into a peaceful settlement of disputed frontiers in Central Asia, and defeated the French forces on land in the Sino-French War (1884–85). But the defeat at sea, and the resulting threat to steamship traffic to Taiwan, forced China to conclude peace on unfavorable terms."[13][14]