The year falls well into the period of Old World history known as the Middle Ages; in Europe, it is sometimes and by convention considered the boundary date between the Early Middle Ages and the High Middle Ages. The Muslim world was in its Golden Age. China was in its Song dynasty، Japan was in its classical Heian period. India was divided into a number of lesser empires، such as the Rashtrakuta Dynasty، Pala Empire (Kamboja Pala dynasty; Mahipala), Chola dynasty (Raja Raja Chola I), Yadava dynasty، etc. Sub-Saharan Africa was still in the prehistoric period, although Arab slave trade was beginning to be an important factor in the formation of the Sahelian kingdoms. The pre-Columbian New World was in a time of general transition in many regions. Wari and Tiwanaku cultures receded in power and influence while Chachapoya and Chimú cultures rose toward florescence in South America. In Mesoamerica، the Maya Terminal Classic period saw the decline of many grand polities of the Petén like Palenque and Tikal yet a renewed vigor and greater construction phases of sites in the Yucatán region like Chichén Itzá and Uxmal. Mitla، with Mixtec influence, became the more important site of the Zapotec, overshadowing the waning Monte Albán. Cholula flourished in central Mexico, as did Tula، the center of Toltec culture.

World population is estimated to have been between c. 250 and 310 million.[1] 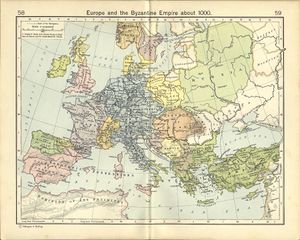 In continental Europe, the Holy Roman Empire established itself as the most powerful state. Otto III made a pilgrimage from Rome to Aachen and Gniezno (Gnesen), stopping at Regensburg، Meissen، Magdeburg، and Gniezno. The Congress of Gniezno (with Bolesław I Chrobry) was part of his pilgrimage. In Rome، he built the basilica of San Bartolomeo all'Isola، to host the relics of St. Bartholomew.

In France، Robert II، the son of Hugh Capet، was the first of the Capetian kings.

The Byzantine Empire under the Macedonian dynasty was engaged in a long and hard war with the First Bulgarian Empire. In the year 1000, the Byzantine generals Theodorokanos and Nikephoros Xiphias captured the former Bulgarian capitals of Pliska and Great Preslav، along with Little Preslav، extending Byzantine control over the northeastern portion of the Bulgarian state (Mysia and Scythia Minor). At the same time, Byzantium was instrumental in the Christianization of the Kievan Rus' and of other medieval Slavic states.

In Great Britain, a unified kingdom of England had developed out of the various Anglo-Saxon kingdoms. In Scandinavia, Christianization was in its early stages, with the Althingi of the Icelandic Commonwealth embracing Christianity in the year 1000.

On September 9، King Olaf Tryggvason was defeated by an alliance of his enemies in the Battle of Svolder. Sweyn I established Danish control over part of Norway. Oslo، Norway، was founded (the exact year is debatable, but the 1,000 year anniversary was held in the year 2000).

The Papacy during this time was in a period of decline, in retrospect known as the saeculum obscurum ("Dark Age") or "pornocracy" ("rule of harlots"), a state of affairs that would result in the Great Schism later in the 11th century.

Hungary was established in 1000 as a Christian state. In the next centuries, the Kingdom of Hungary became the pre-eminent cultural power in the Central European region. On December 25، Stephen I was crowned as the first King of Hungary in Esztergom.

Sancho III of Navarre became King of Aragon and Navarre. The Reconquista was gaining some ground, but the southern Iberian peninsula would still be dominated by Islam for centuries to come; Córdoba at this time was the world's largest city with 450,000 inhabitants.

It is believed that in or around this year, Norse explorer Leif Ericson became the first European to land in the Americas، at L'Anse aux Meadows in modern-day Newfoundland.

The Islamic World was in its Golden Age; still organised in Caliphates, it was still dominated by the Abbasid Caliphate، with the Caliphate of Córdoba to the west, and ongoing campaigns in Africa and in India. Persia was a period of instability, with various polities seceding from Abassid rule, among whom the الغزنويون would emerge as the most powerful.

الهجرة التوركية by this time had reached Eastern Europe, and most of the Turkic tribes (الخزر، البلغار، پچنگ، إلخ) had been Islamized.