The river Vit flows near the town and the tiny Tuchenitsa river (commonly known in Pleven as Barata, literally "The Streamlet") يشقها.

The earliest traces of human settlement in the area date from the 5th millennium BC, the Neolithic. 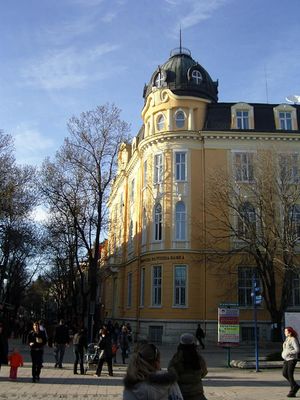 The central streets of Pleven

Numerous archaeological findings, among them the Nikolaevo treasure found in Bulgaria, evidence for the rich culture of the Thracians, who inhabited the area for thousands of years.

In the beginning of the new era, the region became part of the Roman province of Moesia, and a road station called Storgosia arose near present-day Pleven on the road from Oescus (near modern Gigen) to Philippopolis (now Plovdiv). It later evolved into a fortress. One of the most valued archaeological monuments in Bulgaria from the period is the Early Christian basilica from the fourth century discovered near the modern city. 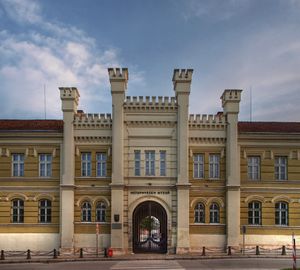 During the Middle Ages, Pleven was a well-developed stronghold of the First and the Second Bulgarian Empire. When Slavs populated the region, they gave the settlement its contemporary name Pleven, it was first mentioned in a charter by Hungarian king Stephen V in 1270 in connection to a military campaign in the Bulgarian lands.

During the Ottoman rule, Pleven, known as پلڤنه in Ottoman Turkish, preserved its Bulgarian appearance and culture. Many churches, schools and bridges were built at the time of the Bulgarian National Revival. In 1825, the first secular school in the town was opened, followed by the first girls' school in Bulgaria in 1840, as well as the first boys' school a year later. Pleven was the place where the Bulgarian national hero Vasil Levski established the first revolutionary committee in 1869, part of his national revolutionary network.

The city (then mostly known as Plevna outside Bulgaria) was a major battle scene during the Russo-Turkish War of 1877–1878 that Russian Tsar Alexander II held for the purpose of the liberation of Bulgaria. The joint Russian and Romanian army paid dearly for the victory, but it paved the path to the defeat of the Ottoman Empire in this war, the restoration of Bulgaria as a state and the independence of Romania from the Ottoman Empire. It cost the Russians and Romanians 5 months and 38,000 casualties to take the town after four assaults, in what was one of the decisive battles of the war. The siege is remembered as a landmark victory of the Romanian War of Independence, as on 28 November 1877 the Plevna citadel capitulated, and Osman Pasha surrendered the city, the garrison and his sword to the Romanian Colonel Mihail Cerchez. 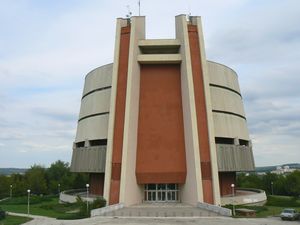 Pleven Panorama, one of the town's best known sights

The Encyclopædia Britannica Eleventh Edition of 1911 concluded its lengthy entry on Pleven (transcribed as Plevna) with the memorable dictum:

On the other hand, the Siege of Plevna stands out among other countless sieges and military actions in the region because of its significance.[4] Without this fortress slowing the Russian onslaught, which gave the Great Powers time to intercede, Constantinople would have been repossessed by a Christian army once more.

The events of the Russo-Turkish War proved crucial for the development of Pleven as a key town of central northern Bulgaria. The town experienced significant demographic and economic growth in the following years, gradually establishing itself as a cultural centre of the region.

The Bulgarian Agrarian National Union, a leading interwar party representing the Bulgarian peasantry, was founded in the town in December 1899.

Prior to the Bulgarian orthographic reform of 1945, the name of the town was spelled Плѣвенъ (with yat) in Cyrillic. 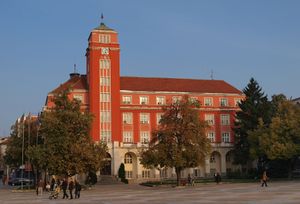 The town hall of Pleven

According to the latest 2011 census data, the individuals declared their ethnic identity were distributed as follows:[11][12]

An overwhelming majority of 90% of Pleven's residents are Eastern Orthodox Christian. The Diocese of Nikopol, of which Pleven is part, is one of the two Roman Catholic dioceses in Bulgaria, and another 5% of the residents are Roman Catholic by faith, a significant number compared to other Bulgarian cities.

Pleven has three Eastern Orthodox churches, the Bulgarian National Revival St Nicholas Church (1834) that was constructed at the place of a chapel from the Second Bulgarian Empire, the St Paraskeva Church (1934) and the Holy Trinity Church, built in 1870 at the place of a church mentioned as early as 1523 and inaugurated by Exarch Antim I. اعتبارا من 2005[تحديث], a new Eastern Orthodox church is being built in the Strogoziya quarter.

The construction of a large Roman Catholic church of Our Lady of Fatima began in 2001. A mosque also exists in the town to serve the needs of the Muslim population, as well as a Methodist church that is situated on the site of the former local puppet theatre. 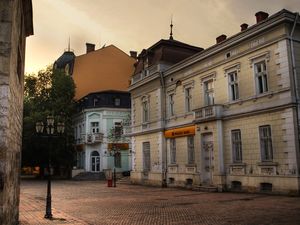 A major centre of oil processing, metalworking, machinery construction, of light and food industries in Socialist times, after 1989 Pleven found itself in an economic crisis, with many of the major enterprises (such as the Plama Pleven oil refinery) closing or practically ceasing to work.[بحاجة لمصدر] However, the late 1990s and early 2000s saw a revival of light industry and the development of branches such as knitwear and store clothes production. Tourism, which had attracted many people from الاتحاد السوڤيتي prior to 1989, and had experienced a slump in the following years, is on the rise again.

The most important economic sectors in Pleven are chemical, textiles and foodstuffs industries, the manufacturing of cement and glass, machine building, tailoring, agriculture, retail and services.[13] The city has seen a number of major foreign investments in the late 1990s and early 2000s. Particularly noticeable is the mass construction of hypermarkets, with three Billa, two Kaufland, two Carrefour (in construction- first one to open in MALL PLEVEN in 2011), two penny markets (1 in construction), DM, Plus (in construction), ELEMAG, METRO, two LIDL (in construction) stores, a Praktiker, bauMax and a number of other hypermarkets being opened اعتبارا من 2006[تحديث]. The Pleven City Center and central mall pleven mall was opened in 2008. In 2005, the investments in the economy of Pleven amounted to around 250 million leva (around €125 million).

The international railway Sofia — Bucharest — Moscow runs through Pleven. The international road E 83 passes just north of the city. The national A2 Hemus highway Sofia — Varna is projected to pass 16 kم (52,493 قدم) south of Pleven. Over 90% of the inner city transportation in Pleven is maintained by trolleybuses. There are 14 trolleybus lines, and 75 kم (246,063 قدم) trolleybus network. The trolleybus fleet consist of ZIU-682 (1985–1988) and Skoda 26-TR Solaris trolleybuses, produced in 2014. A project for 12 kم (39,370 قدم) trolleybus routes extension is underway. When the extension is completed Pleven will become 100% covered by trolleybus transport.

Near Pleven, there is a large facility for medium wave and short wave broadcasting. Pleven medium wave transmitter, working on 594 kHz, uses as antenna two 250 مترs (820 قدم) tall guyed mast radiators insulated against ground. These masts belong to the tallest structures of Bulgaria.[14] 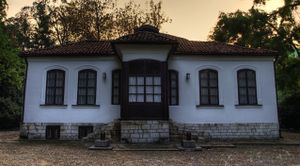 Museum of the Liberation of Pleven

Most of the sights of the town are related to the Russo-Turkish War. The monuments related to the war alone are about 200. Some of the more popular include the St George the Conqueror Chapel Mausoleum in honour of the many Russian and Romanian soldiers who lost their lives during the Siege of Plevna and the ossuary in Skobelev Park. Another popular attraction is Pleven Panorama, created after (and reputedly larger than) the Borodino Panorama in Russia on the occasion of the anniversary of the Siege of Plevna.

The Ivan Radoev Dramatic Theatre is the centre of theatrical life in Pleven. A number of community centres (chitalishta) are also active in the city.

Pleven is often regarded as an important centre of sports in Bulgaria, with many noted Bulgarian sportspeople having been born and/or trained in the town, including Tereza Marinova and Galabin Boevski.

The city hosts two football clubs, Spartak Pleven and Belite orli, which have separate stadiums. Both teams play in the second Bulgarian league and haven't had any major successes in the past, although Spartak Pleven has been the first team for a couple of former Bulgarian internationals such as Plamen Getov.

Spartak Pleven is also a basketball team, a national championship winner in 1995 and national cup winner in 1996 (then named Plama Pleven). Other than that, the team is a regular first league participant.

Pleven is famous for its Kaylaka (where the ruins of the Storgosia fortification can be found) and Skobelev parks. The latter is home to the Pleven Panorama and is situated on the original location of the battle during the Russo-Turkish War.