Born during the reign of his grandmother Queen Victoria, George was third in the line of succession behind his father, Prince Albert Edward, and his own elder brother, Prince Albert Victor. From 1877 to 1892, George served in the Royal Navy, until the unexpected death of his elder brother in early 1892 put him directly in line for the throne. On Victoria's death in 1901, George's father ascended the throne as Edward VII, and George was created Prince of Wales. He became king-emperor on his father's death in 1910.

George's reign saw the rise of socialism, communism, fascism, Irish republicanism, and the Indian independence movement; all of which radically changed the political landscape of the British Empire. The Parliament Act 1911 established the supremacy of the elected British House of Commons over the unelected House of Lords. As a result of the First World War (1914–1918), the empires of his first cousins Nicholas II of Russia and Wilhelm II of Germany fell, while the British Empire expanded to its greatest effective extent. In 1917, he became the first monarch of the House of Windsor, which he renamed from the House of Saxe-Coburg and Gotha as a result of anti-German public sentiment. In 1924, George appointed the first Labour ministry and the 1931 Statute of Westminster recognised the Empire's dominions as separate, independent states within the British Commonwealth of Nations.

He suffered from smoking-related health problems throughout much of his later reign, and at his death was succeeded by his eldest son, Edward VIII. 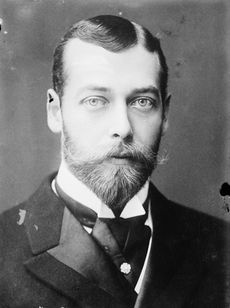 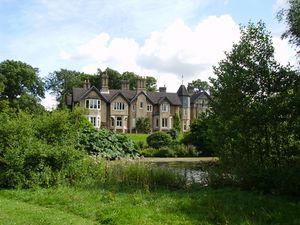 York Cottage at Sandringham House: George and May lived here from 1893 until 1926.

George at Montreal and Quebec, 1901 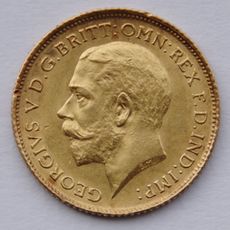 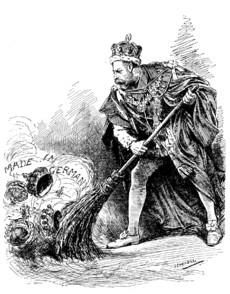 On 4 August 1914 the King wrote in his diary, "I held a council at 10.45 to declare war with Germany. It is a terrible catastrophe but it is not our fault. ... Please to God it may soon be over."[1] From 1914 to 1918, Britain and its allies were at war with the Central Powers, led by the German Empire. The German Kaiser Wilhelm II, who for the British public came to symbolise all the horrors of the war, was the King's first cousin. The King's paternal grandfather was Prince Albert of Saxe-Coburg and Gotha; consequently, the King and his children bore the German titles Prince and Princess of Saxe-Coburg and Gotha and Duke and Duchess of Saxony. Queen Mary, although born in England like her mother, was the daughter of the Duke of Teck, a descendant of the German Dukes of Württemberg. The King had brothers-in-law and cousins who were British subjects but who bore German titles such as Duke and Duchess of Teck, Prince and Princess of Battenberg, and Prince and Princess of Schleswig-Holstein. When H. G. Wells wrote about Britain's "alien and uninspiring court", George replied: "I may be uninspiring, but I'll be damned if I'm alien."[2]

On 17 July 1917, George appeased British nationalist feelings by issuing a royal proclamation that changed the name of the British royal house from the German-sounding House of Saxe-Coburg and Gotha to the House of Windsor.[3] He and all his British relatives relinquished their German titles and styles and adopted British-sounding surnames. George compensated his male relatives by giving them British peerages. His cousin Prince Louis of Battenberg, who earlier in the war had been forced to resign as First Sea Lord through anti-German feeling, became Louis Mountbatten, 1st Marquess of Milford Haven, while Queen Mary's brothers became Adolphus Cambridge, 1st Marquess of Cambridge, and Alexander Cambridge, 1st Earl of Athlone.[4] 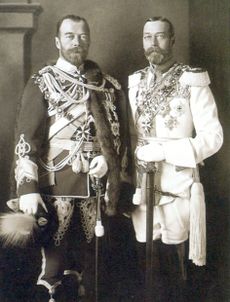 In letters patent gazetted on 11 December 1917, the King restricted the style of "Royal Highness" and the titular dignity of "Prince (or Princess) of Great Britain and Ireland" to the children of the Sovereign, the children of the sons of the Sovereign and the eldest living son of the eldest son of a Prince of Wales.[6] The letters patent also stated that "the titles of Royal Highness, Highness or Serene Highness, and the titular dignity of Prince and Princess shall cease except those titles already granted and remaining unrevoked". George's relatives who fought on the German side, such as Ernest Augustus, Crown Prince of Hanover, and Charles Edward, Duke of Saxe-Coburg and Gotha, had their British peerages suspended by a 1919 Order in Council under the provisions of the Titles Deprivation Act 1917. Under pressure from his mother, Queen Alexandra, the King also removed the Garter flags of his German relations from St George's Chapel, Windsor Castle.[7]

When Tsar Nicholas II of Russia, George's first cousin, was overthrown in the Russian Revolution of 1917, the British government offered political asylum to the Tsar and his family, but worsening conditions for the British people, and fears that revolution might come to the British Isles, led George to think that the presence of the Romanovs would be seen as inappropriate.[8] Despite the later claims of Lord Mountbatten of Burma that Prime Minister David Lloyd George was opposed to the rescue of the Russian imperial family, the letters of Lord Stamfordham suggest that it was George V who opposed the idea against the advice of the government.[9] Advance planning for a rescue was undertaken by MI1, a branch of the British secret service,[10] but because of the strengthening position of the Bolshevik revolutionaries and wider difficulties with the conduct of the war, the plan was never put into operation.[11] The Tsar and his immediate family remained in Russia, where they were killed by the Bolsheviks in 1918. George wrote in his diary: "It was a foul murder. I was devoted to Nicky, who was the kindest of men and thorough gentleman: loved his country and people."[12] The following year, Nicholas's mother, Marie Feodorovna, and other members of the extended Russian imperial family were rescued from Crimea by a British warship.[13]

Two months after the end of the war, the King's youngest son, John, died at the age of 13 after a lifetime of ill health. George was informed of his death by Queen Mary, who wrote, "[John] had been a great anxiety to us for many years ... The first break in the family circle is hard to bear but people have been so kind & sympathetic & this has helped us much."[14]

In May 1922, the King toured Belgium and northern France, visiting the First World War cemeteries and memorials being constructed by the Imperial War Graves Commission. The event was described in a poem, The King's Pilgrimage by Rudyard Kipling.[15] The tour, and one short visit to Italy in 1923, were the only times George agreed to leave the United Kingdom on official business after the end of the war.[16]

The British Empire at its territorial peak in 1921

Before the First World War, most of Europe was ruled by monarchs related to George, but during and after the war, the monarchies of Austria, Germany, Greece, and Spain, like Russia, fell to revolution and war. In March 1919, Lieutenant-Colonel Edward Lisle Strutt was dispatched on the personal authority of the King to escort the former Emperor Charles I of Austria and his family to safety in Switzerland.[17] In 1922, a Royal Navy ship was sent to Greece to rescue his cousins, Prince and Princess Andrew.[18]

Political turmoil in Ireland continued as the Nationalists fought for independence; George expressed his horror at government-sanctioned killings and reprisals to Prime Minister Lloyd George.[19] At the opening session of the Parliament of Northern Ireland on 22 June 1921, the King appealed for conciliation in a speech part drafted by General Jan Smuts and approved by Lloyd George.[20] A few weeks later, a truce was agreed.[21] Negotiations between Britain and the Irish secessionists led to the signing of the Anglo-Irish Treaty.[22] By the end of 1922, Ireland was partitioned, the Irish Free State was established, and Lloyd George was out of office.[23]

The King and his advisers were concerned about the rise of socialism and the growing labour movement, which they mistakenly associated with republicanism. The socialists no longer believed in their anti-monarchical slogans and were ready to come to terms with the monarchy if it took the first step. George adopted a more democratic, inclusive stance that crossed class lines and brought the monarchy closer to the public and the working class—a dramatic change for the King, who was most comfortable with naval officers and landed gentry. He cultivated friendly relations with moderate Labour Party politicians and trade union officials. His abandonment of social aloofness conditioned the royal family's behaviour and enhanced its popularity during the economic crises of the 1920s and for over two generations thereafter.[24][25]

The years between 1922 and 1929 saw frequent changes in government. In 1924, George appointed the first Labour Prime Minister, Ramsay MacDonald, in the absence of a clear majority for any one of the three major parties. George's tactful and understanding reception of the first Labour government (which lasted less than a year) allayed the suspicions of the party's sympathisers. During the General Strike of 1926 the King advised the government of Conservative Stanley Baldwin against taking inflammatory action,[26] and took exception to suggestions that the strikers were "revolutionaries" saying, "Try living on their wages before you judge them."[27] 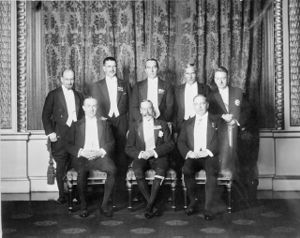 In 1926, George hosted an Imperial Conference in London at which the Balfour Declaration accepted the growth of the British Dominions into self-governing "autonomous Communities within the British Empire, equal in status, in no way subordinate one to another". The Statute of Westminster 1931 formalised the Dominions' legislative independence[28] and established that the succession to the throne could not be changed unless all the Parliaments of the Dominions as well as the Parliament at Westminster agreed.[29] The Statute's preamble described the monarch as "the symbol of the free association of the members of the British Commonwealth of Nations", who were "united by a common allegiance".[30]

In the wake of a world financial crisis, the King encouraged the formation of a National Government in 1931 led by MacDonald and Baldwin,[31][32] and volunteered to reduce the civil list to help balance the budget.[31] He was concerned by the rise to power in Germany of Adolf Hitler and the Nazi Party.[33] In 1934, the King bluntly told the German ambassador Leopold von Hoesch that Germany was now the peril of the world, and that there was bound to be a war within ten years if Germany went on at the present rate; he warned the British ambassador in Berlin, Eric Phipps, to be suspicious of the Nazis.[34]

In 1932, George agreed to deliver a Royal Christmas speech on the radio, an event that became annual thereafter. He was not in favour of the innovation originally but was persuaded by the argument that it was what his people wanted.[35] By the Silver Jubilee of his reign in 1935, he had become a well-loved king, saying in response to the crowd's adulation, "I cannot understand it, after all I am only a very ordinary sort of fellow."[36]

George's relationship with his eldest son and heir, Edward, deteriorated in these later years. George was disappointed in Edward's failure to settle down in life and appalled by his many affairs with married women.[29] In contrast, he was fond of his second son, Prince Albert (later George VI), and doted on his eldest granddaughter, Princess Elizabeth; he nicknamed her "Lilibet", and she affectionately called him "Grandpa England".[37] In 1935, George said of his son Edward: "After I am dead, the boy will ruin himself within 12 months", and of Albert and Elizabeth: "I pray to God my eldest son will never marry and have children, and that nothing will come between Bertie and Lilibet and the throne."[38][39] 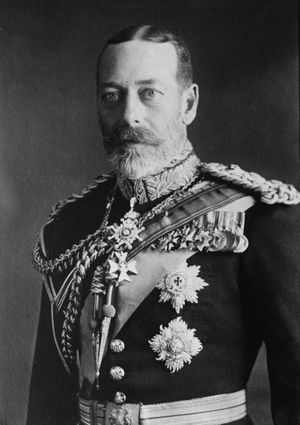 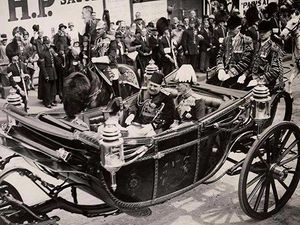 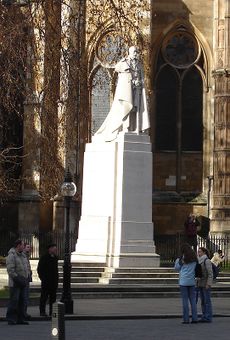 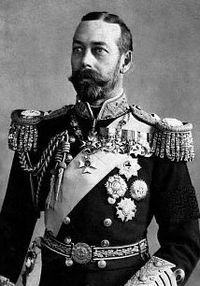 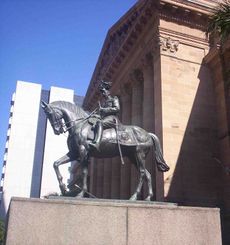 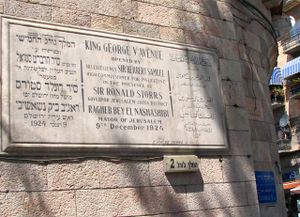 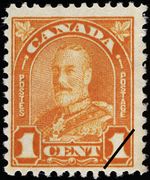 The "Death of King George V." - Special issue of the Illustrated London News from January 25, 1936