The HESA Ababil (فارسية: ابابیل, "swallow") is an Iranian single-engine multirole tactical UAV manufactured by Iran Aircraft Manufacturing Industrial Company (HESA). The Ababil comes in two main lines, the Ababil-2 and the Ababil-3, which each have a number of variants.

The Ababil program was begun during the Iran-Iraq War. The Ababil-2, developed in the 1990s, has rudimentary surveillance capabilities and can be used as a loitering munition, but is mainly used as a target drone. The larger and more capable Ababil-3, introduced in the 2000s, was designed for ISR use and has improved surveillance capabilities.[1] Overall, the Ababil is "a pretty rough-and-ready system" – cheap, simple, and easy to use.[2]

The Ababil-2 and Ababil-3 have been widely exported to governments and non-state actors in the Middle East and elsewhere.[1] The Ababil has been used in the 2006 Lebanon War, the Iraq War, and the Sudanese, Syrian, Iraqi, and Yemeni civil wars.[1] 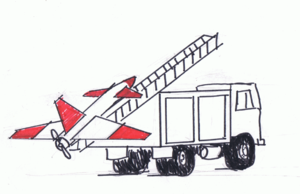 Artist's impression of an Ababil-R being launched from a pneumatic truck launcher. 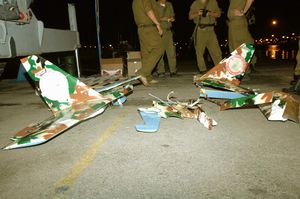 Hezbollah acquired Ababil-2 drones (twin-tail variant) in 2002,[3] and operated them under the Mirsad-1 designation. Israel has said that Hezbollah received at least 12 Ababils before the 2006 Lebanon War.[4] Three Ababils were launched during the conflict.

The Ababil is built in a number of poorly documented variants.[أ]

The Ababil-1 was an obscure loitering munition built in the 1980s. Its specifications are not known, there are no know photographs, and it is unknown if it was ever used in combat. It is believed to be out of service.[1] 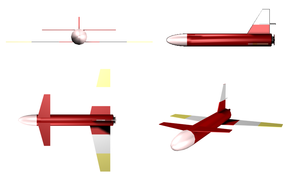 The Ababil-2 has an improved flight-control system. Jane's reports that the Ababil-2 had its first flight in 1997 while Galen Wright writes that it entered production in 1992. Both sources agree the Ababil-2 was publicly revealed in 1999.[1][5] Some sources also designate the Ababil-2 as the Ababil-II.

The most common Ababil-2 variant is a target drone variant used for training air-defense crews. The name of Ababil variants is unclear, but Jane's reports that this variant is called the Ababil-B.[5] The Ababil-B's mission payloads are acoustic miss-distance-indicators, IR devices, and radar reflectors.[5][1] This variant is the oldest Ababil-2 variant and it apparently entered service in 2001.[6] 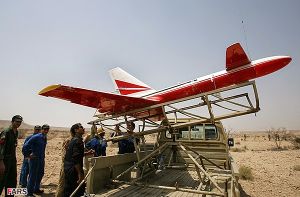 An Iranian Ababil-B on a JATO launcher.

The name of the Ababil-2 surveillance variant is similarly unclear,[1] but Jane's reports that this is called the Ababil-S.[5] Some sources may also designate this the Ababil-R.[7] Galen Wright assesses it as having "only rudimentary" surveillance capabilities in contrast to other ISR UAVs.[1]

The Ababil-2 also exists in a twin-tail variant, which some (but not all) sources name the Ababil-T.[5] This variant can be fitted with surveillance, target drone, or disposable strike munition payloads.[1] It is probably coterminous with the "Mirsad-1" UAV operated by Hezbollah[5] and may have been renamed "Qasef-1" in Houthi service.[8]

The Qasef-1 loitering munition is based on the Ababil-2 airframe and has a 30-kg warhead.[9] It has been solely operated by Yemeni Houthis rebels, who have mostly used it to attack the radar components of MIM-104 Patriot surface-to-air missiles.[8] The Qasef-1 has been in use since late 2016 and some examples have been intercepted in transit to Yemen.[8] It is possibly simply a renamed Ababil-T.[8]

The Houthis claim that the Qasef-1 is manufactured themselves, but this claim has been broadly rejected and there is widespread agreement it is Iranian-built.[8] 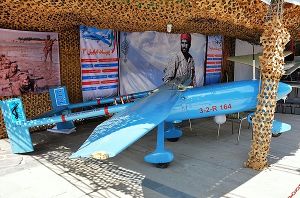 An Iranian Ababil-3. Note that with a mid-body wing, twin tailbooms, and horizontal tail, the Ababil-3 is very dissimilar from other Ababils.

The Ababil-3 is a complete redesign of the Ababil with an improved airframe used solely for surveillance.[1] Some sources also designate the Ababil-3 as the Ababil-III. It is more widely exported than the Ababil-2, and is known to have entered production by 2006.[1] 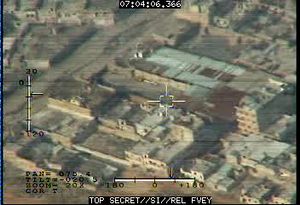 The Ababil-3 can collect real-time video.

In 2014 Iran announced that they had developed night vision capabilities for the Ababil-3.[13] Previous Ababil variants were most effective in daytime.

Ababil-3s have been extensively used in the Syrian Civil War.[1] The heterogeneity of pro-regime forces makes it difficult to determine who operates or controls their use. 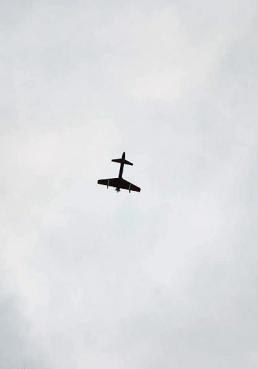 An Ababil-2 as seen from the ground.