Assyria was one of three provinces (with Armenia and Mesopotamia) خلقها الامبراطور الروماني تراجان[1] in 116 AD following a successful military campaign against Parthia, in present-day Iraq.

Despite Rome's military victory, Trajan's province was plagued with difficulties from the start. In 116, a Parthian prince named Santruces organized an armed revolt by the native Assyrians in the new Roman province. During the revolt, Roman garrisons in Assyria and Mesopotamia were driven from their posts, and a Roman general was killed as his army tried unsuccessfully to stop the rebellion.[2]

When Trajan died in 117, his successor, Hadrian, implemented a new policy with respect to the recently acquired territories in the east. Hadrian believed that the empire was overextended, and wanted to retract Roman rule to more easily defensible borders.[3] As a result, Hadrian evacuated Trajan's three provinces in 118.[4]

Although many sources cite the creation of a province named Assyria during Trajan's Parthian campaign, some disagreement exists regarding its exact location. Usually historians like تيودور مومزن wrote that it was located north of the Roman Mesopotamia province, in Upper Mesopotamia, stretching into غرب فارس ( في منطقة تُدعى Media Atropatene) في شمال غرب إيران الحالية.

But some modern scholars argue that the Assyria Provincia كانت تقع بين نهري دجلة والفرات، في ما هو اليوم وسط العراق، a location that is corroborated by the text of the 4th-century Roman historian Festus.[5] However, other sources contend that the province was located near Armenia and east of the Tigris, in a region formerly known as Adiabene,[6] which was a neo Assyrian kingdom.

Hadrian's withdrawal from Assyria and its neighboring provinces in 118 did not mark the end of Roman rule in this region. A second Parthian campaign was launched from 161-165 under the command of Lucius Verus, with the Roman army once more conquering territories east of the Euphrates.[7] Rome pursued military action against the Parthians again in 197-8 under the command of emperor Septimius Severus.[8]

Following his successful campaign, Severus instituted two new Roman provinces--Osroene (a Neo-Assyrian kingdom centered on Edessa) and Mesopotamia—on the territories annexed by Trajan in 114-117. Severus also stationed two Roman legions in the new provinces to ensure stability and prevent against first Parthian, and later Sassanian attacks.[9] Roman influence in the area came to an end under Jovian in 363, who abandoned the region after concluding a hasty peace agreement with the Sassanians and retreating to Constantinople to consolidate his political power.[10] 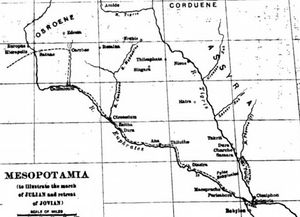 Location of the province of Assyria; east of the Tigris River.

Despite continued Roman activity in the region, no further reference is made to a Roman province of Assyria following Hadrian's evacuation in 118 AD. When Septimus Severus created the provinces of Osroene and Mesopotamia at the end of the 2nd century, no mention is made of a Roman province of Assyria. During his travels with Jovian in the Near East, the Roman historian Ammianus Marcellinus says, "Within this circuit is Adiabene, which was formerly called Assyria;" ostensibly referring to Trajan's former Assyria Provincia. Ammianus Marcellinus also refers to a region called Assyria located between the Tigris and Euphrates, but makes no reference to a current Roman province bearing that name.[11]

Thus, it seems that the province of Assyria only existed during Trajan's reign, and was not reinstated during later Roman occupations of the region. The general area coincided with ancient Assyria however, and the Medes, Achaemenid Persians, Seleucid Greeks, Sassanids and Parthians all had similar names for the area (Ashur, Athura, Assuristan).

The native Assyrian people of the region had already begun to adopt Christianity by Trajan's time, and still retained an Akkadian infused Eastern Aramaic as a spoken and literary tongue, as they do to this day.