The ship is a wave-piercing, aluminum-hulled, commercial catamaran with military enhancements, such as a helicopter flight deck, vehicle deck, small boat and unmanned vehicle launch and recovery capability, and a communications suite. She features a new, modular design, which will allow her to be refitted to support missions without requiring long shipyard periods. While from the front the vessel looks like a trimaran, the center hull does not rest in the water and is not used for buoyancy. As a logistics vessel, the ship does not have water-tight compartments or weapons systems. Propulsion is provided by directional water jets, so the ship does not have propellers or a rudder for steering, and can maneuver in 3.7 م (12 قدم) of water.[4]

The HSV stands for "High Speed Vessel", and her home port while chartered as a MSC vessel was Naval Amphibious Base Little Creek in Norfolk, Virginia. The vessel had two CONMAR crews that typically rotated every three months to keep the ship deployed eleven months per year. The minimum crew size is 35; during her time with the MSC 18 were military with the balance civilian, provided through American Maritime Officers and Seafarers International Union of the United States Merchant Marine. On rare occasion that she was in a United States port, it was usually Naval Station Mayport, Florida, supporting the Fourth Fleet or Charleston, South Carolina, for major maintenance. Rota, Spain, was considered by the crew to be the "Mediterranean home away from home.[4]

The ship was constructed by the Australian shipbuilder Incat in Hobart, Tasmania, and was leased to the U.S. Navy through Bollinger/Incat of Lockport, Louisiana. She was the second catamaran the Navy leased to test new technologies and concepts associated with the Chief of Naval Operations's "Sea Power 21" plan. The contract value for the first year was $21.7 million.

The first ship of this class to be used by the Navy, HSV-1 Joint Venture, proved its military mettle during the 2003 invasion of Iraq as a forward staging platform for Marine Fleet Anti-Terrorism and United States Navy SEAL (SEa, Air, Land) teams in the shallow waters of Umm Qasr, Iraq. The Navy hoped to build upon lessons learned from Swift and its predecessor, and eventually use the information to create a new class of littoral combat ships.[5]

In the autumn of 2003, while operating with the Fifth Fleet, Swift completed the fastest-ever transit of the northern Great Barrier Reef from Cairns to Booby Island, Australia, averaging slightly over 39 عقدةs (72 كم/س).[6] During flight deck certifications, Swift's crew conducted aircraft recovery while making 43 عقدةs (80 كم/س) during one recovery and had 66-عقدة (122 كم/س) apparent winds during another recovery.[6]

In November 2003 she began West African Training Cruise-04. She first visited the South African Navy (SAN) base at Durban on 3 November 2003. She then exercised with the SAN and the South African Air Force off Simon's Town in the Western Cape. As of early November 2003, as reported by Jane's Defence Weekly on 19 November 2003, exercises were also planned with Cameroon, Gambia, Ghana, Morocco, Senegal, and Sierra Leone. Swift had embarked a small United States Marine Corps (USMC) detachment for the cruise, 'which will draw on Norway Air-Landed Marine Expeditionary Brigade equipment for the exercises.'[7] The Jane's Defence Weekly story said that Marine reservists will practice with the NALMEB equipment, and the cruise would also be used to evaluate an experimental lightweight ROWPU that was at that time being tested by the USMC warfighting laboratory. The vessel returned in early 2004. 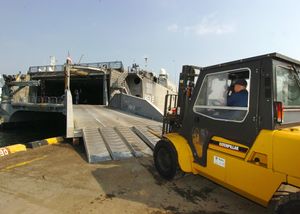 A forklift offloads supplies from Swift in Singapore, 30 January 2005

Prior to arriving in the Tsunami affected region, crews were swapped in Pearl Harbor, with Gold crew relieving Blue crew in less than eight hours.[بحاجة لمصدر] Swift embarked a helicopter detachment, and served as a base of operations for two helicopters and their crew for 30 consecutive days at sea. During the operation, Swift sailed for 30 straight days, supported a helicopter detachment and support crew and conducted two underway replenishments.[13] 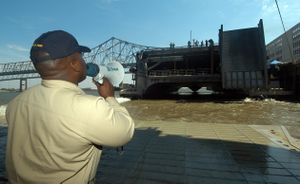 In 2005, Swift played a major role in Hurricane Katrina relief efforts. With most roads inaccessible along the Gulf Coast, Swift and its crew delivered the necessary supplies by water, traversing the Mississippi River multiple times hauling humanitarian aid between Pensacola, Florida, and New Orleans, Louisiana.[14]

During the 2006 Israel-Lebanon conflict, HSV-2 Swift was used to transport humanitarian assistance materials from Cyprus to Beirut.[15] 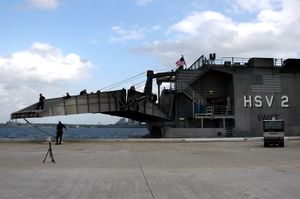 During the last half of the deployment, more than 20,000 رطل (9,100 kغ) of medical and food supplies were donated through Project Handclasp. Swift hosted numerous dignitaries, including the Prime Minister of Jamaica and U.S. Ambassadors to Panama, Guatemala, Nicaragua, Honduras and Jamaica.[16] 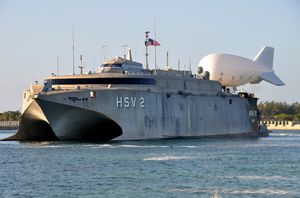 On 5 May 2010, HSV-2, along with various embarked Navy and Marine Corps units, departed Naval Station Mayport for a five-month deployment for Southern Partnership Station (SPS) 2010.[17]

Swift was to be replaced with USNS Spearhead when that vessel came into service.[20] Originally chartered in July 2003 as an interim mine warfare command and support ship for "transformational" mine warfare modular mission payload initiatives, the ship had been sent to the Persian Gulf, South Africa, the North Sea, and Hawaii within one year. Other locations included the Gulf of Mexico, Singapore, Thailand, Sicily, Spain, and southern California. As mine demonstration missions wore down, Swift was used in partnership missions, performing extended cruises to Africa, the Caribbean, and Central and South America. The five-year charter was renewed in 2008, and the ship continued to serve until the introduction of Joint High Speed Vessels. HSV-2 Swift ended its service with Military Sealift Command in 2013.[21]

Swift returned to Incat at Hobart in July 2013 for refit for sale or charter.[22] As of July 2015 the vessel was reported to being operated by the UAE's National Marine Dredging Company.[21]

Houthis fighters claimed to have sunk the Swift off the Yemeni coast (في مضيق باب المندب) around 1 October 2016. The UAE military reported Swift had been involved in an "incident" and said there were no casualties, but did not say whether the ship was damaged.[23] UAE officials reported that the ship was carrying aid when it was attacked.[24] Saudi Arabia reported that their forces rescued passengers from a damaged UAE ship at dawn on 1 October 2016.[25] There currently seems to be some confusion as to whether she was enroute to Aden (apparently a regular destination) or Mokha at the time she was attacked.[بحاجة لمصدر] Unnamed US Defense officials reported that four "shoulder-fired rockets" were used in the attack,[3] but Houthis said it was a C-802/Noor anti-ship missile.[بحاجة لمصدر] US destroyers يوإس‌إس Mason and يوإس‌إس Nitze, and amphibious transport dock يوإس‌إس Ponce were dispatched to the area "to ensure that shipping continues unimpeded in the strait and the vicinity."[3] The US Defense officials said that Swift was in tow to Eritrea as of 3 October 2016.[3]

Later photographs proved that she is still afloat, albeit heavily damaged, as of 5 October 2016.[26] 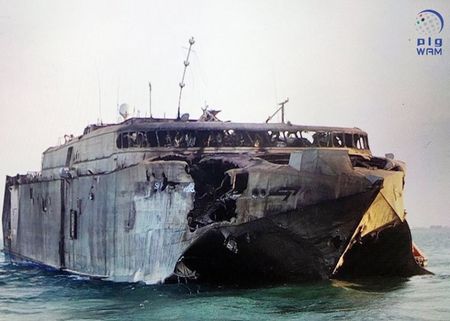