C-802 is the export upgraded version of the Chinese anti-ship missile YJ-8 (بالصينية: 鹰击-8code: zh is deprecated , literally "Eagle Strike"; NATO reporting name: CSS-N-8 Saccade), first unveiled in 1989 by the China Haiying Electro-Mechanical Technology Academy (CHETA), also known as the Third Academy. Due to the Yingji-82 missile's small radar reflectivity, low attack flight path (only five to seven meters above the sea surface) and strong anti-jamming capability of its guidance system, target ships have a very small chance of intercepting the missile.[بحاجة لمصدر] The single shot hit probability of the Yingji-82 is unknown, though one unreferenced source claims it to be as high as 98%.[1] The Yingji-82 can be launched from airplanes, surface ships, submarines and land-based vehicles.

It is commonly misunderstood even in China that C-802 is the export version of YJ-82 (بالصينية: 鹰击-82code: zh is deprecated ) but actually YJ-82 is the submarine-borne version of YJ-8 and it never was exported.[2]

The C-802 anti-ship missile was derived from the Chinese YJ-8 (C-801) with extended range. The YJ-82 is externally similar to the YJ-8, and has the same solid-propellant rocket booster and guidance system as the YJ-8. The most distinctive difference on the YJ-82 is that it employs a turbojet with paraffin (kerosene)-based fuel to replace the original solid rocket engine. For this reason the fuselage was extended to accommodate the extra fuel. The maximum range of the missile has also been extended from the original 40 km (or 80 km for YJ-81/C-801A) to 120 km.

The YJ-82 is almost identical to the YJ-8 in appearance apart from a slightly longer fuselage and an air inlet for the turbojet engine. The missile has a slim body and ovoid nose. There are four front delta wings, four smaller control surfaces, and four large tail stabilising wings. The tail wings are mounted on the rocket booster and are lost when the booster detaches from the missile body. The air inlet is located between the main fins under the missile body. The front and tail wings are folded when the missile is in the launcher.

When the missile is launched, the solid rocket propellant booster accelerates the speed of the missile to Mach 0.9 in a few seconds. After the booster burns out, it detaches from the missile body and the missile's turbojet engine starts. Controlled by the inertial autopilot system and radio altimeter, the missile flies at a cruising speed of Mach 0.9, and the cruise altitude is reduced to 10–20 metres (depending on the sea state) from the original 20–30 metres of the C-801/YJ-81.

When entering the terminal phase of flight, the missile switches on its terminal guidance radar to search for the target. Once within a few kilometers of the target, the missile drops to 3–5 meters above sea level, about the same as a French Exocet missile. This altitude is slightly lower than the original 5–7 metres of the C-801/YJ-81. The missile may also maneuver during the terminal phase to make it a more difficult target for shipborne air defense systems. When approaching the target, the missile dives to hit the waterline of the ship to inflict maximum damage. At the 6th Zhuhai Airshow held at the end of 2006, the manufacturer revealed that the "pop-up" approach and the checkpoint flight functions are being worked on.

As well as its terminal guidance radar, the midcourse guidance is inertial. During the inertial guidance, the YJ-8 missile is also equipped with a radio altimeter for use with its autopilot during cruise. The missile's terminal guidance radar with monopulse system possesses high anti-jamming capabilities. The high precision radio altimeter allows the missile to have a minimum-altitude flight above the sea, normally 20–30 m.

The missile uses a 165 kg semi-armor-piercing anti-personnel blast warhead which relies on the missile's kinetic energy to pierce the deck of a ship, penetrate into and explode in the ship's interior. The YJ-82 might have a higher single hit probability than the YJ-8/YJ-81.[بحاجة لمصدر]

Most upgrades of C-802 are funded not by the Chinese government but by the manufacturers and trading firms themselves. Most upgrades focused on the guidance systems.

A datalink associated with the radar seeker and the dual radar and infrared guidance seeker armed C-802 was added to enable the missile to receive target information provided by aircraft, and this later became a standard feature. The first successful test fire of the C-802 with the datalink was conducted with Harbin SH-5 ASW equipped with British radar, and soon after, with Y-8X Maritime Patrol Aircraft equipped with Litton Canada radar. This datalink was originally developed for YJ-83/C-803, the successor of the YJ-82/C-802, and adopted for the YJ-82/C-802 upgrade.

Based on the datalink associated with the radar seeker, a newer datalink that was compatible with all three types of seekers was also successfully developed, enabling the missile to significantly improve its attack capability by allowing the pilot of the aircraft or the crew of the ship to view the images provided by the television or the imaging infrared seekers, and thus to select the potential targets, just like the way A-10 pilots used the images provided by the imaging infrared seekers of AGM-65 Maverick Air-to-surface missiles for targeting during the Persian Gulf War. Land attack capability is the greatest beneficiary since mobile targets on land can be engaged as a result, though only when the missile is equipped with television and imaging infrared seekers, but not the radar seeker. Like the datalink only associated with the radar seeker, the newer datalink allows the operators to alter the course of the missile and change targets after launching. However, there are no reports to support the claim that the operator can terminate the attack via the datalink like that of the Harpoon missile. This new datalink has very little difference from radar seeker associated datalink it is developed from in terms of hardware; the major difference is the software programs.

For the air-launched version, a universal missile launching rail system was also developed for the C-802, reducing the installation time significantly. The new system also allowed virtually any aircraft in the Chinese inventory to be armed with the YJ-82K.

For the surface-launched version, China developed a new launcher/storage container that is able to handle YJ-8 (C-801), YJ-82 (C-802) and CY-1 ASW missiles, and this new container became standard. 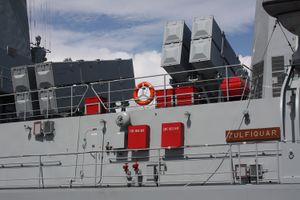 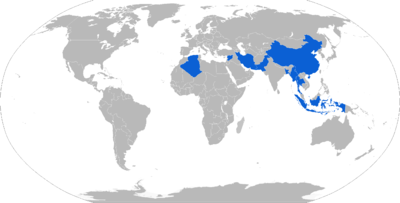 YJ-82 is deployed by the latest Chinese surface combatants, including destroyers and frigates, and earlier vessels have been upgraded with the missile. Airborne radar systems, carried by fixed-wing aircraft or helicopters, are also deployed to provide over-the-horizon targeting. The YJ-82K air-launched variant arms the JH-7 fighter-bomber, which can carry 4 of the missiles. The missile is also deployed in the land attack role for shore bombardment.

News reports indicate that this was the missile used[20] on July 14, 2006, in the 2006 Lebanon War when Hezbollah fired two at Israeli warships.[21][22] One missile hit the corvette INS Hanit, causing significant damage and four fatalities.[23] Iran, the reported supplier of the missile to Hezbollah, refused to formally confirm or deny the claim. The Hanit suffered severe damage, but stayed afloat, got itself out of the line of fire, and made the rest of the journey back to Ashdod for repairs on its own.[24]

The Israeli ship possessed sophisticated multi-layered missile defense capability: a Phalanx CIWS gun, Barak 1 anti-missile missiles, Chaff and ECM. These should have been able to prevent an anti-ship missile attack such as the YJ-82, but according to the Israeli military, these were intentionally disabled at the time of the alleged missile hit due to: