Caspar Willard "Cap" Weinberger, GBE (August 18, 1917 – March 28, 2006), was an American politician and businessman. As a prominent Republican,[1] he served in a variety of prominent state and federal positions for three decades, including Chairman of the California Republican Party, 1962-68. Most notably he was appointed Secretary of Defense under Republican President Ronald Reagan from 1981 to 1987. [2]

Born in San Francisco, California, Weinberger served in the 41st Infantry Division in the Pacific theater of الحرب العالمية الثانية. His entry into politics was as a California State Assemblyman from 1953 to 1959, and he would go on to serve as Chairman of the Federal Trade Commission and Director of the Office of Management and Budget under Presidents Richard Nixon and Gerald Ford. An accomplished private sector businessman, he later became vice president and general counsel of Bechtel Corporation, and still later Chairman of Forbes.

His tenure as Secretary of Defense is the third longest in U.S. history, and spanned the final years of the Cold War. He is also known for his key role in the administration's Strategic Defense Initiative and later indictments in the Iran–Contra affair. He was awarded both the Presidential Medal of Freedom in 1987 and an honorary British knighthood from Queen Elizabeth II.

Weinberger was born in San Francisco, California, the younger of two sons of Herman Weinberger, a Colorado-born lawyer. His mother, the former Cerise Carpenter Hampson, was an accomplished violinist. His father was of Jewish Bohemian descent, while his maternal grandparents were immigrants from England.[3] Weinberger had stated that his mother's Episcopal religion was "an enormous influence and comfort all my life".[4] 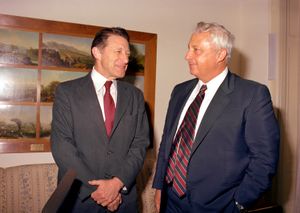 The Iran–Contra affair concerned the selling of US missiles to Iran. The funds received from Iran were then channeled to guerilla freedom fighters known as Contras, who were fighting the oppressive socialist government of Nicaragua.[5] Such funding had been specifically denied by the democrats in the US Congress. 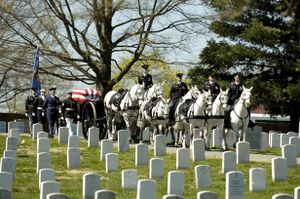 While residing on Mount Desert Island, Maine, Weinberger was treated for and died from complications of pneumonia at Eastern Maine Medical Center in Bangor, Maine, aged 88. He was survived by his wife, the former Rebecca Jane Dalton, their two children and several grandchildren.