وُلِد بيتش في سپرنگ‌فيلد، مساتشوستس and was the son of a prominent publisher, Moses Beach. Alfred Beach worked for his father until he and a friend, Orson Desaix Munn, decided to buy Scientific American, a relatively new publication. They ran Scientific American until their deaths decades later, and it was carried on by their sons and grandsons for decades more. Munn and Beach also established a very successful patent agency. Beach patented some of his own inventions, notably an early typewriter designed for use by the blind and an engineering first for the Americas, designed and built one of the world's first tunneling shields in the same year as famed engineer James Henry Greathead.[1] . After the Civil War he founded a school for freed slaves in Savannah, the Beach Institute, which is now the home of the King-Tisdell Cottage Foundation.[2]

Beach's most famous invention was New York City's first subway, the Beach Pneumatic Transit.[3] This idea came about during the late 1860s, when traffic in New York was a nightmare, especially along the central artery, Broadway. Beach was one of a few visionaries who proposed building an underground railway under Broadway to help relieve the traffic congestion. The inspiration was the underground Metropolitan Railway in London but in contrast to that and others' proposals for New York, Beach proposed the use of trains propelled by pneumatics instead of conventional steam engines, and construction using a tunnelling shield of his invention[4] to minimize disturbing the street.[5]

Beach was also interested in pneumatic tubes for the transport of letters and packages, another idea recently put into use in London.[7] With a franchise from the state he began construction of a tunnel for small pneumatic tubes in 1869, but diverted it into a demonstration of a passenger railway that opened on February 26, 1870.[8] To build a passenger railway he needed a different franchise, something he lobbied for over four legislative sessions, 1870 to 1873. Construction of the tunnel was obvious from materials being delivered to Warren St near Broadway, and was documented in newspaper reports, but Beach kept all details secret until the New York Tribune published a possibly planted article a few weeks before opening.[9] 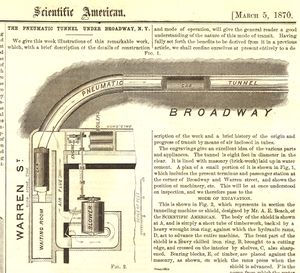 Plan of the Beach Pneumatic Transit station and tunnel

In 1870 state senator William M. Tweed introduced a bill for Beach's subway that did not pass.[10] By the end of 1871 Tweed's Tammany Hall political machine was in disgrace and from then on Beach, in an effort to gain support from reformers, claimed that Tweed had opposed his subway.[11] The real opposition to the subway was from politically connected property owners along Broadway, led by Alexander Turney Stewart and John Jacob Astor III, who feared that tunnelling would damage buildings and interfere with surface traffic.[12] Bills for Beach's subway passed the legislature in 1871 and 1872 but were vetoed by Governor John T. Hoffman because he said that they gave away too much authority without compensation to the city or state. In 1873 Governor John Adams Dix signed a similar bill into law, but Beach was not able to raise funds to build over the next six months, and then the Panic of 1873 dried up the financial markets.[5]

During this same time, other investors had built an elevated railway in Greenwich St and Ninth Ave, which operated successfully with a small steam engine starting in 1870. This elevated railway gave an Idea to James Henry Greathead for the Docker's Umbrella in Liverpool which, was a similar idea for an overhead railway for the purpose of easing congestion on the ground in England. The wealthy property owners did not object to the New York railway well away from Broadway, and by the mid-1870s it appeared that elevated railways were practical and underground railways were not, setting the pattern for rapid transit development in New York for the rest of the 19th century.[5]

Beach operated his demonstration railway from February 1870 to April 1873. It had one station in the basement of Devlin's clothing store, a building at the southwest corner of Broadway and Warren St, and ran for a total of about 300 feet, first around a curve to the center of Broadway and then straight under the center of Broadway to the south side of Murray St.[8] The former Devlin's building was destroyed by fire in 1898.[13] In 1912 workers for Degnon Contracting excavated the tunnel proper during the construction of a subway line running under Broadway. The tunnel was completely within the limits of the present day City Hall station under Broadway.[14] The British pneumatic tube also failed to attract much attention and eventually fell into disrepair and disrepute in spite of the fact that Royal Mail had contracted to use the tunnels. Ultimately the English experiment failed due to technical issues and lack of funding, also.

Much of the Beach subway story was recalled as precedent by Lawrence Edwards in his lead article of the August 1965 issue of Scientific American, which described his invention of Gravity-Vacuum Transit.[15]

The Beach Tunnelling Shield, similar to the 1864 English patent idea of Barlow's, was used in the construction of the Grand Trunk Railway of Canada's first St. Clair Tunnel between Port Huron, Michigan and Sarnia, Ontario.[16] This tunnel opened in 1890.

In January 1887 Beach donated land to 7 men who were starting a yacht club in Stratford, CT. The Housatonic boat club is the oldest operating yacht club in CT.