نقل بيتش الهوائي Beach Pneumatic Transit كان أول محاولة لبناء نظام نقل عام تحت الأرض في مدينة نيويورك. وكان من تطوير ألفرد إلاي بيتش في 1869 as a demonstration subway line running on pneumatic power. As the subway line had one stop and a one-car shuttle going back and forth, it was not a regular mode of transportation. It lasted from 1870 until 1873. 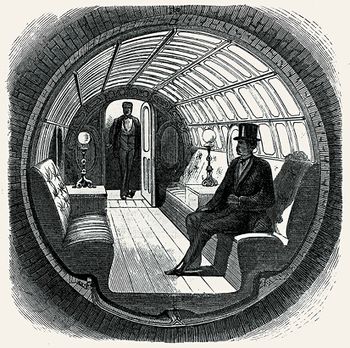 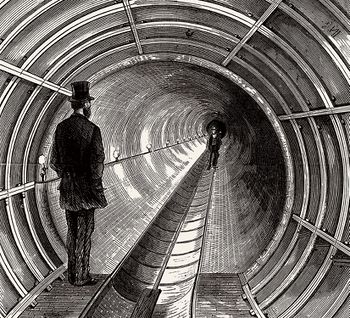 ألفرد إلاي بيتش demonstrated a model of basic pneumatic subway system, in which air pressure in the tube pushed the cars, at the American Institute Exhibition in New York in 1867.[3] After demonstrating that the model was viable, in 1869 Beach and his Beach Pneumatic Transit Company began constructing a pneumatically powered subway line beneath Broadway. Funneled through a company he set up, Beach put up $350,000 of his own money to pay for the full-scale test project.[4] Built with a tunneling shield,[3] the tunnel was complete in only 58 days.[1] Its single tunnel, 312 قدم (95 م) long, 8 قدم (2.4 م) in diameter, was completed in 1870 and ran under Broadway from Warren Street to Murray Street.[3][5]

However, one of the city's top politicians of the day, William "Boss" Tweed, refused to support the project. With no initial political support for the project, Beach started the project by claiming he was building postal tubes. The initial permit was to install a pair of smaller postal tubes below Broadway; however, Tweed later amended the permit to allow the excavation of a single large tunnel, wherein the smaller tubes could reside.[6]:12–13[7] The exact location of the tubes was determined during construction by compass and survey as well as verified by driving jointed rods of iron up through the roof of the tunnel to the pavement.[8] The line was built as a demonstration of a pneumatic transit system, open to the public with a 25-cent fare per person.[3] Proceeds for the admission went to the Union Home and School for Soldiers' and Sailors' Orphans.[9] It was planned to run about 5 ميلs (8 kم) in total, to Central Park, if it were ever completed.[6]:11

For the public, the project was used as an attraction. It ran only a single car on its one-block-long track to a dead-end at its terminus, and passengers would simply ride out and back, to see what the proposed subway might be like. During its first two weeks of operation, the Beach Pneumatic Transit sold over 11,000 rides, and over 400,000 total rides in its single year of operation.[7][10][11] Although the public showed initial approval, Beach was delayed in getting permission to expand it due to official obstruction for various reasons. By the time he finally gained permission in 1873, public and financial support had waned, and the subway was closed down within the year.[11] The project was shut down when a stock market crash caused investors to withdraw support. It is unclear that such a system could have been practical for a large-scale subway network.[3][6]:14[12]

After the project was shut down, the tunnel entrance was sealed. The station, built in part of the basement of the Rogers Peet Building, was reclaimed for other uses until the entire building was lost to fire in 1898.[13] In 1912, workers excavating for the BMT Broadway Line (serving the present-day N R trains) dug into the old Beach tunnel, where they found the remains of the car, the tunnelling shield used during initial construction, and even the piano in the subway's waiting room.[3][11] The shield was removed and donated to Cornell University, which has since lost track of its whereabouts.[14] The tunnel was almost completely within the limits of the Broadway Line's City Hall station, but it is rumored that a small portion could still be accessed by a manhole on Reade Street.[15] The New-York Historical Society commissioned a plaque honoring Alfred Beach to be placed in the City Hall station.[4][7]

Although the Beach Pneumatic Transit lasted for only three years, the project gave rise to the New York pneumatic tube mail system, which was based on the request that Beach had made to Tweed and which ran until 1953.[6]:14

The station was very ornate, and was adorned with frescoes and easy chairs. It was illuminated by zirconia lamps that revealed the luxurious interior.[16] There were statues and a goldfish pond in the station that people could look at while they waited for their turn to enter the ride.

The car could hold 22 people,[17] and the riders would enter the site at Devlin's Clothing Store, a well-known shop located at 260 Broadway, on the southwest corner of Warren Street.[9][18][19]

The ride was controlled by a 48-طن-صغير (44 t) Roots blower,[7] nicknamed "the Western Tornado", built by Roots Patent Force Rotary Blowers (see Roots Blower Company). When the car reached the end, baffles on the blower system were reversed, and the car was pulled back by the suction.[17]