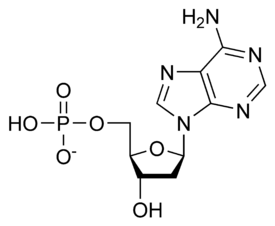 هذا النيوكليوتيد يحتوي the five-carbon sugar deoxyribose (at center), a nitrogenous base called adenine (upper right), and one phosphate group (left). The deoxyribose sugar joined only to the nitrogenous base forms a Deoxyribonucleoside called deoxyadenosine, whereas the whole structure along with the phosphate group is a nucleotide, a constituent of DNA with the name deoxyadenosine monophosphate. 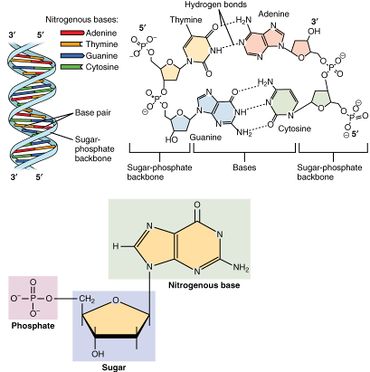 Showing the arrangement of nucleotides within the structure of nucleic acids: At lower left, a monophosphate nucleotide; its nitrogenous base represents one side of a base-pair. At upper right, four nucleotides form two base-pairs: thymine and adenine (connected by double hydrogen bonds) and guanine and cytosine (connected by triple hydrogen bonds). The individual nucleotide monomers are chain-joined at their sugar and phosphate molecules, forming two 'backbones' (a double helix) of a nucleic acid, shown at upper left.

In nucleic acids, nucleotides contain either a purine or a pyrimidine base—i.e., the nitrogenous base molecule, also known as a nucleobase—and are termed ribonucleotides if the sugar is ribose, or deoxyribonucleotides if the sugar is deoxyribose. Individual phosphate molecules repetitively connect the sugar-ring molecules in two adjacent nucleotide monomers, thereby connecting the nucleotide monomers of a nucleic acid end-to-end into a long chain. These chain-joins of sugar and phosphate molecules create a 'backbone' strand for a single- or double helix. In any one strand, the chemical orientation (directionality) of the chain-joins runs from the 5'-end to the 3'-end (read: 5 prime-end to 3 prime-end)—referring to the five carbon sites on sugar molecules in adjacent nucleotides. In a double helix, the two strands are oriented in opposite directions, which permits base pairing and complementarity between the base-pairs, all which is essential for replicating or transcribing the encoded information found in DNA.

Nucleic acids then are polymeric macromolecules assembled from nucleotides, the monomer-units of nucleic acids. The purine bases adenine and guanine and pyrimidine base cytosine occur in both DNA and RNA, while the pyrimidine bases thymine (in DNA) and uracil (in RNA) occur in just one. Adenine forms a base pair with thymine with two hydrogen bonds, while guanine pairs with cytosine with three hydrogen bonds.

In addition to being building blocks for construction of nucleic acid polymers, singular nucleotides play roles in cellular energy storage and provision, cellular signaling, as a source of phosphate groups used to modulate the activity of proteins and other signaling molecules, and as enzymatic cofactors, often carrying out redox reactions. Signaling cyclic nucleotides are formed by binding the phosphate group twice to the same sugar molecule, bridging the 5'- and 3'- hydroxyl groups of the sugar.[1] Some signaling nucleotides differ from the standard single-phosphate group configuration, in having multiple phosphate groups attached to different positions on the sugar.[2] Nucleotide cofactors include a wider range of chemical groups attached to the sugar via the glycosidic bond, including nicotinamide and flavin, and in the latter case, the ribose sugar is linear rather than forming the ring seen in other nucleotides.

Structural elements of three nucleotides—where one-, two- or three-phosphates are attached to the nucleoside (in yellow, blue, green) at center: 1st, the nucleotide termed as a nucleoside monophosphate is formed by adding a phosphate (in red); 2nd, adding a second phosphate forms a nucleoside diphosphate; 3rd, adding a third phosphate results in a nucleoside triphosphate. + The nitrogenous base (nucleobase) is indicated by "Base" and "glycosidic bond" (sugar bond). All five primary, or canonical, bases—the purines and pyrimidines—are sketched at right (in blue).
Examples of non-nucleic acid nucleotides

Nucleotides can be synthesized by a variety of means both in vitro and in vivo.

In vitro, protecting groups may be used during laboratory production of nucleotides. A purified nucleoside is protected to create a phosphoramidite, which can then be used to obtain analogues not found in nature and/or to synthesize an oligonucleotide.

In vivo, nucleotides can be synthesized de novo or recycled through salvage pathways.[3] The components used in de novo nucleotide synthesis are derived from biosynthetic precursors of carbohydrate and amino acid metabolism, and from ammonia and carbon dioxide. The liver is the major organ of de novo synthesis of all four nucleotides. De novo synthesis of pyrimidines and purines follows two different pathways. Pyrimidines are synthesized first from aspartate and carbamoyl-phosphate in the cytoplasm to the common precursor ring structure orotic acid, onto which a phosphorylated ribosyl unit is covalently linked. Purines, however, are first synthesized from the sugar template onto which the ring synthesis occurs. For reference, the syntheses of the purine and pyrimidine nucleotides are carried out by several enzymes in the cytoplasm of the cell, not within a specific organelle. Nucleotides undergo breakdown such that useful parts can be reused in synthesis reactions to create new nucleotides. 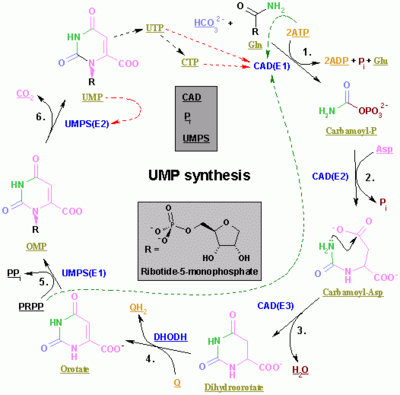 The atoms that are used to build the purine nucleotides come from a variety of sources: 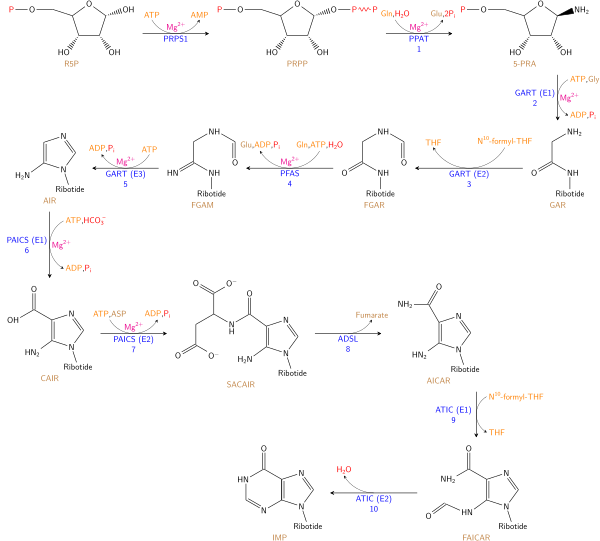 Nucleotides can be synthesized with both purine and pyrimidine as bases. In DNA, the purine bases are adenine and guanine, while the pyrimidines are thymine and cytosine. RNA uses uracil rather than thymine (thymine is produced by adding a methyl to uracil). The nucleotide passes through numerous biochemical steps while being processed, adding and removing atoms through the use of numerous enzymes. 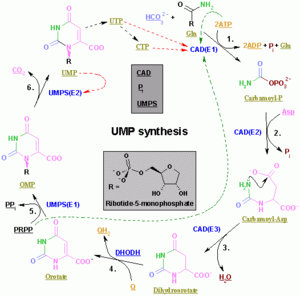 The synthesis of UMP.
The color scheme is as follows: enzymes, coenzymes, substrate names, inorganic molecules

The atoms which are used to build the purine nucleotides come from a variety of sources: 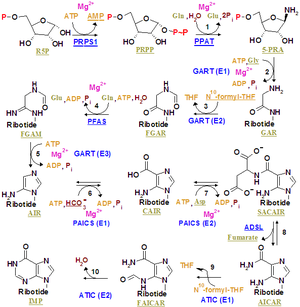 The de novo synthesis of purine nucleotides by which these precursors are incorporated into the purine ring, proceeds by a 10 step pathway to the branch point intermediate IMP, the nucleotide of the base hypoxanthine. AMP and GMP are subsequently synthesized from this intermediate via separate, two step each, pathways. Thus purine moieties are initially formed as part of the ribonucleotides rather than as free bases.

Six enzymes take part in IMP synthesis. Three of them are multifunctional:

Reaction 1. The pathway starts with the formation of PRPP. PRPS1 is the enzyme that activates R5P, which is primarily formed by the pentose phosphate pathway, to PRPP by reacting it with ATP. The reaction is unusual in that a pyrophosphoryl group is directly transferred from ATP to C1 of R5P and that the product has the α configuration about C1. This reaction is also shared with the pathways for the synthesis of the pyrimidine nucleotides, Trp, and His. As a result of being on (a) such (a) major metabolic crossroad and the use of energy, this reaction is highly regulated.

Reaction 2. In the first reaction unique to purine nucleotide biosynthesis, PPAT catalyzes the displacement of PRPP's pyrophosphate group (PPi) by Gln's amide nitrogen. The reaction occurs with the inversion of configuration about ribose C1, thereby forming β-5-phosphorybosylamine (5-PRA) and establishing the anomeric form of the future nucleotide. This reaction which is driven to completion by the subsequent hydrolysis of the released PPi, is the pathway's flux generating step and is therefore regulated too.