Halil Fırat from the Justice and Development Party (AKP) was elected mayor in the local elections in March 2019.[2] The current Kaymakam is Halid Yıldız.[3]

Samsat was the ancient capital of Kingdom of Commagene. The current site of Samsat is comparatively new, however, being rebuilt in 1989 when the old town of Samosata was flooded during the construction of the Atatürk Dam.[4] The reconstruction process has not yet been fully completed.[5] An ancient tell nearby dating back to the paleolithic era has survived to the current day.

The most commonly accepted origin of the name suggests that ancient Samosata was so named in honour of Sames I, an Orontid king of Armenia and Sophene who ruled around 260 BC.[10][11][12][13] 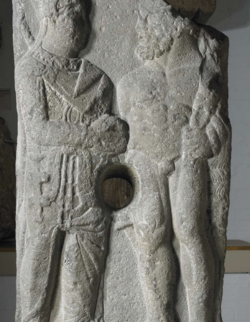 نصب من البازلت؛ في الواجهة نحت بارز للملك أنطيوخوس الأول المتجلي (مملكة كوماگنى) يحيي the nude Herakles-Verethragna as his equal and proferring his right hand in a Dexiosis scene; king shown wearing a belted tunic, cloak, high decorated tiara or kitaris (an adaptation of the Armenian tiara) and, on the right hip, a four-lobed dagger; Herakles-Verethragna carries his club and the skin of the Nemean lion. On the two sides and back, a late Greek inscription referring to cult practices established by Antiochus; in the centre is a hole, illustrating the object's later re-use as an oil-press. المتحف البريطاني

Control of the region of Commagene was apparently held by the Orontid dynasty from the 3rd century BC, who also ruled over Armenia and Sophene. These seem to have held Commagene continuously from the time of Sames I, as the later kings of Commagene of the 2nd century BC traced their lineage back to them.[14]

الملك أنطيوخوس الثالث was the last effective ruler,[15] and his death caused a political crisis of succession into which Rome intervened in 72 AD.[16] 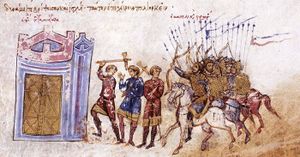 It was at Samosata that Julian II had ships made in his expedition against شاپور الثاني, and it was a natural crossing-place in the struggle between Heraclius and Chosroes in the 7th century.

كان القرن 13 مدمراً للبلدة. Rüknettin Süleyman II of the Anatolian Seljuks captured Samosata in 1203, and it was looted in 1237 by the Harzemşah. Then it was invaded by the Mongol Emperor Hülagü Khan in 1240 and later also by the Dulkadiroğulları.

It was temporarily absorbed into the Ottoman Empire by Yıldırım Beyazıt in 1392 and in 1401 it was destroyed by Timur. In 1516, the ottoman Sultan Selim I recaptured it for the Ottomans who renamed it Samsat. It lost its old importance in the Ottoman administration and became the centre of a sanjak.

During Turkey's republican period, the population of the town was decreasing. In 1960, Samsat was transformed into a district center and connected to the province of Adıyaman.

The city of Samsat was evacuated from the old settlement on 5 March 1988 due to the construction of the Atatürk Dam. A new location for the settlement was announced through the law No. 3433 dated 21 April 1988. The historical Samsat was submerged in 1989 as the Atatürk Dam was filled with the water of the Euphrates river. The new town was built beside the new waterline by the Turkish government to house the displaced residents.

In the Christian martyrology, seven Christian martyrs were crucified in 297 in Samosata for refusing to perform a pagan rite in celebration of the victory of Maximian over the Sassanids: Abibus, Hipparchus, James, Lollian, Paragnus, Philotheus, and Romanus. Saint Daniel the Stylite was born in a village near Samosata; Saint Rabbulas, venerated on 19 February, who lived in the 6th century at Constantinople, was also a native of Samosata. A Notitia Episcopatuum of Antioch in the 6th century mentions Samosata as an autocephalous metropolis (Échos d'Orient, X, 144); at the synod that reinstated Patriarch Photius I of Constantinople (the Photian Council) of 879, the See of Samosata had already been united to that of Amida (Diyarbakır).[18] As in 586, the titular of Amida bears only this title ([19]), it must be concluded that the union took place between the 7th and the 9th centuries. Earlier bishops included Peperius, who attended the Council of Nicaea (325); Saint Eusebius of Samosata, a great opponent of the Arians, killed by an Arian woman (c. 380), honoured on 22 June; Andrew, a vigorous opponent of Cyril of Alexandria and of the Council of Ephesus.[20]

Chabot gives a list of twenty-eight Syrian Miaphysite bishops.[21] The Syrian bishopric probably lapsed in the 12th century.[22] Samosata is included in the Catholic Church's list of titular sees, but no further titular bishops have been appointed for that eastern see since the Second Vatican Council.

Samsat Höyük is a tell located just north of the Samsat district of Adıyaman. Archaeological research on the hill of Şehremuz in Samsat has uncovered relics from the 7000 BC Paleolithic era; the 5000 BC Neolithic, 3000 BC Chalcolithic and 3000 to 1200 BC Bronze Ages. The ancient city of Ḫaḫḫum (Hittite: Ḫaḫḫa) was located nearby; it is recorded as a source of gold for ancient Sumeria.

The first excavations were conducted in 1964 and 1967 under the direction of T. Goell. In fact, the settlement was known and famous before these excavations. Then, in 1977, under the Lower Euphrates Project, plans were put together aimed at identifying and saving the archaeological settlements that were to be inundated by the reservoir of Karakaya and Atatürk Dams. Surface surveys were conducted under the direction of Mehmet Özdoğan. In these studies, it was concluded that the settlement was permanently inhabited from the Halaf Period to the Ottoman Period. The following year, the excavations started in 1978, except for 1980, until 1987, under Ankara University, Faculty of Language and History-Geography It was conducted by the team led by Nimet Özgüç. These excavations were carried out on a very wide area, including the lower city and surrounding walls.

The walls of the Seljuk Period, built on a solid Byzantine fortress, were preserved intact. The inscription on the limestone of this fortification was studied by a master calligrapher. The landfill belonged to Diyarbekr Şah Karaaslan.[26]

Today the settlement is under the Euphrates but before inundation it was 37–40 meters above the plain level and had an area of 500 x 350 meters. The steepest slope is the eastern slope and the lowest slope is the southwest-facing slope. The mound consists of a terrace and a ruined town covered with sediment.[29] Samsat Höyük as an archaeological site is considered to no longer accessible while it is covered by the waters of the reservoir. The old town of Samosata below the tell was not excavated.[30]

Samsat district peninsula in the distance.

The new Samsat district is a peninsula surrounded on the three sides by the Atatürk Reservoir. The distance from the sea to the city centre is 470 km. The district is a plain that descends to the south.

In the hot summers and dry winters, while the Mediterranean climate is warm and rainy, it is similar to the South East Anatolian climate due to the low relative humidity. However, due to the influence of the Atatürk Reservoir in recent years, humidity has increased relatively.