استمع)), sometimes romanized as Sian, is the capital of Shaanxi Province. A sub-provincial city on the Guanzhong Plain in Northwest China,[5] it is one of the oldest cities in China, the oldest prefecture capital and one of the Chinese Four Great Ancient Capitals, having held the position under several of the most important dynasties in Chinese history,[6] including Western Zhou, Qin, Western Han, Sui, Northern Zhou and Tang.[6] The city is the starting point of the Silk Road and home to the UNESCO World Heritage set Terracotta Army of Emperor Qin Shi Huang.[7]

Since the 1980s, as part of the economic growth of inland China especially for the central and northwest regions, Xi'an has re-emerged as a cultural, industrial, political and educational centre of the entire central-northwest region, with many facilities for research and development, national security and space exploration. Xi'an currently holds sub-provincial status, administering 11 districts and 2 counties.[8] The city is the third most populous city in Western China, the other two being Chongqing and Chengdu, as well as the most populous city in Northwestern China.[9] In 2020, Xi'an was ranked as beta-city from the Globalization and World Cities Research Network biannual city rankings,[10] and, according to the country's own ranking, ranked 17th.[11]

Its total population was 12,952,907 as of the 2020 census and its built-up (or metro) area was home to 12,283,922 inhabitants including 10 Xi'an urban districts (all but Huyi and Yanliang not conurbated yet) and 3 Xianyang parts (Qindu and Weicheng districts and Xingping city) largely being conurbated.[12]

"Xi'an" is the atonal pinyin romanization of the Mandarin pronunciation of its name 西安, which means "Western Peace" in Chinese. (The apostrophe – known in Chinese as a 隔音符號, géyīn fúhào – should be included to distinguish its pronunciation from the single syllable xian.) The name was adopted in 1369 under the early Ming dynasty. Jesuit missionaries recorded its name as "Si-ngan" or "Si-ngan-fou"[17] from its status as the seat of a prefecture (府, fǔ). This form still appears in the Latin name of the Catholic diocese of Xi'an, archidioecesis Singanensis. The name was later romanized as "Hsi-an" by Wade & Giles and as "Sianfu"[18] or "Sian"[7] by the Qing imperial post office, both of which were common until the general adoption of pinyin.

The area of present-day Xi'an has been the site of several important former Chinese cities. The capital of the Western Zhou were the twin cities of Feng and Hao, known collectively as Fenghao, located on opposite banks of the Feng River at its confluence with the southern bank of the Wei in the western suburbs of present-day Xi'an.[19] The Qin capital Xianyang was erected north of the Wei during the Warring States period and was succeeded by the Western Han capital of Chang'an (長安), meaning "Perpetual Peace", which was located south of the Wei and covered the central area of present-day Xi'an. During the Eastern Han, Chang'an was also known as Xijing (西京) or the "Western Capital", relative to its position to the main capital at Luoyang. Under the Sui, its name became Daxing (大興, "Greatly Prosperous") in AD 581. Under the Tang, the name reverted to Chang'an in 618.[7] Under the Mongolian Yuan dynasty (13th & 14th centuries), it held a succession of names: Fengyuan (奉元), Anxi (安西, "Peaceful West") and Jingzhao (京兆). The Ming name "Xi'an" was changed back to Xijing ("Western Capital", as above) between 1930 and 1943.

Xi'an has a rich and culturally significant history. The Lantian Man was discovered in 1963 in Lantian County, 50 kم (160,000 قدم) southeast of Xi'an, and dates back to at least 500,000 years before the present time. A 6,500-year-old Neolithic village, Banpo, was discovered in 1953 on the eastern outskirts of the city proper, which contains the remains of several well organized Neolithic settlements carbon dated to 5,600–6,700 years ago.[20][21][22][23] The site is now home to the Xi'an Banpo Museum, built in 1957 to preserve the archaeological collection.[24]

Remains of carriages and horses in Fenghao during the Western Zhou (11th–8th cent. BC)

Xi'an became a cultural and political centre of China in the 11th century BC with the founding of the Zhou dynasty. The capital of Zhou was established in the twin settlements of Fengjing (丰京) and Haojing, together known as Fenghao, located southwest of contemporary Xi'an. The settlement was also known as Zhōngzhōu to indicate its role as the capital of the vassal states.[25] In 770 BC, the capital was moved to Luoyang due to political unrest.[26]

Following the Warring States period, China was unified under the Qin dynasty (221–206 BC) for the first time, with the capital located at Xianyang, just northwest of modern Xi'an.[27] The first emperor of China, Qin Shi Huang ordered the construction of the Terracotta Army and his mausoleum just to the east of Xi'an almost immediately after his ascension to the throne.[28]

In 202 BC, the founding emperor Liu Bang of the Han dynasty established his capital in Chang'an County; his first palace, Changle Palace (長樂宮, "Perpetual Happiness") was built across the river from the ruin of the Qin capital. This is traditionally regarded as the founding date of Chang'an. Two years later, Liu Bang built Weiyang Palace (未央宮, "Future Central Palace") north of modern Xi'an. Weiyang Palace was the largest palace ever built on Earth, covering 4.8 kiloمتر مربعs (1,200 أكرs), which is 6.7 times the size of the current Forbidden City and 11 times the size of the Vatican City.[29] The original Xi'an city wall was started in 194 BC and took 4 years to finish. Upon completion, the wall measured 25.7 kم (84,317.59 قدم) in length and 12 to 16 م (39.37–52.49 قدم) in thickness at the base, enclosing an area of 36 kم2 (387,500,775.00 قدم2). In the year 190, amidst uprisings and rebellions just prior to the Three Kingdoms Period, a powerful warlord named Dong Zhuo moved the court from Luoyang to Chang'an in a bid to avoid a coalition of other powerful warlords against him. 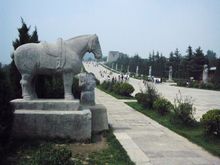 Statues in the Imperial Tomb of Tang Emperor Gaozong 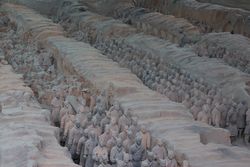 The site of the Hanyuan Hall in Daming Palace

The Nestorian Stele, also known as the Nestorian Stone, Nestorian Monument,[31] or Nestorian Tablet, is a Tang Chinese stele erected in 781 that documents 150 years of early Christianity in China.[32] It is a 279 cm tall limestone block with text in both Chinese and Syriac describing the existence of Christian communities in several cities in northern China. It reveals that the initial Nestorian Christian church had met recognition by the Tang Emperor Taizong, due to efforts of the Christian missionary Alopen in 635.[33]

In October 1911, during the revolution in which the Qing dynasty was overthrown, revolutionary forces massacred 20,000 Manchus in the process in the northeastern zone within Xi'an's city walls, wiping out the entire Manchu population in the city.[34][35]

In 1936, the Xi'an Incident took place inside the city during the Chinese Civil War. The incident brought the Kuomintang (KMT) and Communist Party of China to a truce in order to concentrate on fighting against the Japanese Invasion.[36] On May 20, 1949, the Communist-controlled People's Liberation Army captured the city of Xi'an from the Kuomintang force.[37]

Xi'an made headlines for being one of the many cities where the 2012 China anti-Japanese demonstrations occurred.[38][39][40] 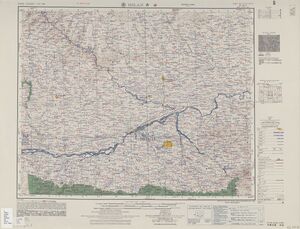 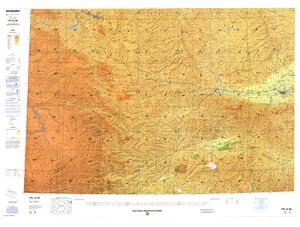 The city borders the northern foot of the Qin Mountains (Qinling) to the south, and the banks of the Wei River to the north. Hua Shan, one of the five sacred Taoist mountains, is located 100 kم (330,000 قدم) away to the east of the city. Not far to the north is the Loess Plateau.

At the beginning of Han dynasty, Prime Minister Zhang Liang advised the emperor Liu Bang to choose Guanzhong as the capital of the Han dynasty: "Guanzhong Plain, which is located behind Xiao Pass and Hangu Pass, connects Long (Gansu) and Shu (Sichuan). Lands of thousand miles rich in harvest be found here, as if this place belongs to the nation of heaven." (关中左崤函，右陇蜀，沃野千里，此所谓金城千里，天府之国也) Since then, Guanzhong is also known as the 'Nation of the Heaven'.[41]

Xi'an has a temperate climate that is influenced by the East Asian monsoon, classified under the Köppen climate classification as situated on the borderline between a semi-arid climate (BSk) and humid subtropical climate (Cwa). The Wei River valley is characterised by hot, humid summers, cold, dry winters, and dry springs and autumns. Most of the annual precipitation is delivered from July to late October. Snow occasionally falls in winter but rarely settles for long. Dust storms often occur during March and April as the city rapidly warms up. Summer months also experience frequent but short thunderstorms. The monthly 24-hour average temperature ranges from around the freezing mark in January to 27.0 °م (80.6 °ف) in July, with an annual mean of 14.08 °م (57.3 °ف). With monthly percent possible sunshine ranging from 31 percent in December to 47 percent in August, the city receives 1,536 hours of bright sunshine annually. Extremes since 1951 have ranged from −20.6 °م (−5 °ف) on January 11, 1955 to 41.8 °م (107 °ف) on June 21, 1998. A highest record of 42.9 °م (109 °ف) was registered in another station on June 17, 2006.[42][43] 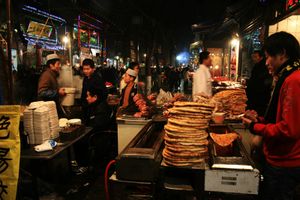 The majority of Xi'an residents are Han Chinese, who make up 99.1 percent of the city's total population. There are around 81,500 people belonging to ethnic minorities living in Xi'an, including 50,000 Hui people.[بحاجة لمصدر]

During World War II, Xi'an became a destination for many refugees from other provinces of China, especially neighboring Henan Province. Because Xi'an was far inland, the invading Japanese army only managed a few aerial assaults on the city. As a result, Xi'an suffered minimal destruction. After 1949, the national government tried to balance the development in different regions of China, and relocated a number of factories and universities from other cities to Xi'an. Modern Xi'an Jiaotong University was relocated from its original campus in Shanghai.

The sub-provincial city of Xi'an has direct jurisdiction over 11 districts and 2 counties: 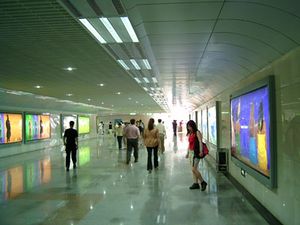 Underpass around the Bell Tower 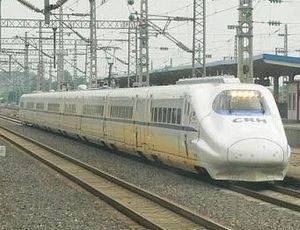 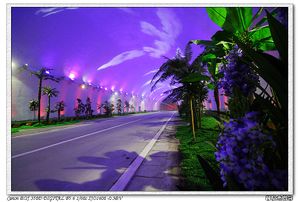 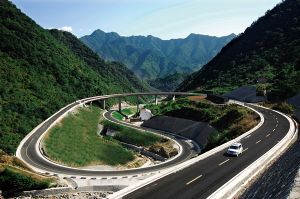 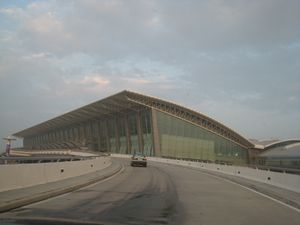 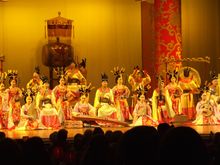 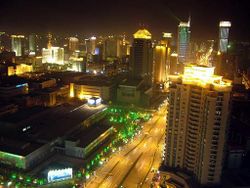 Xi'an was the first city in China to be introduced to Islam. Emperor Gaozong of the Tang dynasty officially allowed the practice of Islam in AD 651. Xi'an has a large Muslim community, the significant majority are from the Hui group, there are an estimated 50,000 Hui Muslims in Xi’an.[52] There are seven mosques in Xi'an, the best known being the Great Mosque.[53] 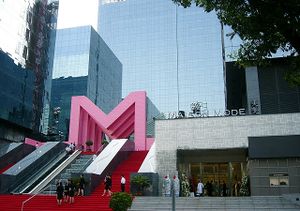 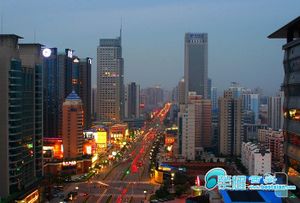 As part of the China Western Development policy, Xi’an became a major target for accelerated attention. From 1997 to 2006, the industrial output value of Xi’an’s service industry increased at an annual average rate of 13.74 percent, compared to traditional service industries of 0.74 percent, representing a growth from US$8.113 billion to US$25.85 billion.[54] Xi'an is the largest economy of the Shaanxi province, with a GDP of 324.1 billion Yuan in 2010. On average this value increases by 14.5 percent annually, and accounts for approximately 41.8 percent of Shaanxi's total GDP.[54][55] At least fifty-eight countries have established over 2,560 enterprises in Xian, including nineteen of the Fortune 500 enterprises. These include ABB Group, Mitsubishi, Panasonic, Toshiba, Fujitsu, Coca-Cola, and Boeing.[56] 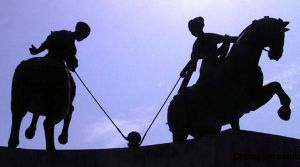 Polo was once popular in China 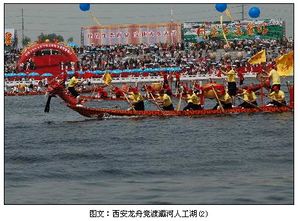