Compare the above rhyming Vietnamese example to the English phrase "(as) drunk as a skunk", which is also a rhyming simile, and "(as) poor as a church mouse", which is only semantic.[6]

Like other Southeast Asian languages, Vietnamese has a comparatively large number of vowels.

Below is a vowel diagram of Hanoi Vietnamese (including centering diphthongs):

Front and central vowels (i, ê, e, ư, â, ơ, ă, a) are unrounded, whereas the back vowels (u, ô, o) are rounded. The vowels â [ə] and ă [a] are pronounced very short, much shorter than the other vowels. Thus, ơ and â are basically pronounced the same except that ơ [əː] is of normal length while â [ə] is short – the same applies to the vowels long a [aː] and short ă [a].[7] There are restrictions on the high offglides: /j/ cannot occur after a front vowel (i, ê, e) nucleus and /w/ cannot occur after a back vowel (u, ô, o) nucleus.[8]

The consonants that occur in Vietnamese are listed below in the Vietnamese orthography with the phonetic pronunciation to the right. 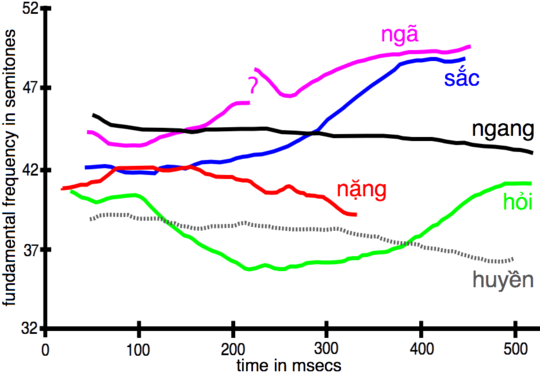 Pitch contours and duration of the six Northern Vietnamese tones as spoken by a male speaker (not from Hanoi). Fundamental frequency is plotted over time. From Nguyễn & Edmondson (1998).

Each Vietnamese syllable is pronounced with an inherent tone,[9] centered on the main vowel or group of vowels. Tones differ in:

Tone is indicated by diacritics written above or below the vowel (most of the tone diacritics appear above the vowel; however, the nặng tone dot diacritic goes below the vowel).[10] The six tones in the northern varieties (including Hanoi), with their self-referential Vietnamese names, are:

Other dialects of Vietnamese have fewer tones (typically only five).

Words with tones belonging to a particular tone group must occur in certain positions within the poetic verse.

Vietnamese Catholics practice a distinctive style of prayer recitation called đọc kinh, in which each tone is assigned a specific note or sequence of notes.

The Vietnamese language has several mutually intelligible regional varieties (or dialects). The five main dialects are as follows:[11]

The syllable-initial ch and tr digraphs are pronounced distinctly in North-central, Central, and Southern varieties, but are merged in Northern varieties (i.e. they are both pronounced the same way). The North-central varieties preserve three distinct pronunciations for d, gi, and r whereas the North has a three-way merger and the Central and South have a merger of d and gi while keeping r distinct. At the end of syllables, palatals ch and nh have merged with alveolars t and n, which, in turn, have also partially merged with velars c and ng in Central and Southern varieties.

In addition to the regional variation described above, there is also a merger of l and n in certain rural varieties:

The table above shows the pitch contour of each tone using Chao tone number notation (where 1 = lowest pitch, 5 = highest pitch); glottalization (creaky, stiff, harsh) is indicated with the 〈◌̰〉 symbol; murmured voice with 〈◌̤〉; glottal stop with 〈ʔ〉; sub-dialectal variants are separated with commas. (See also the tone section below.) 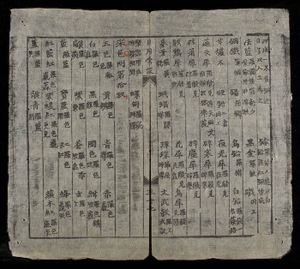 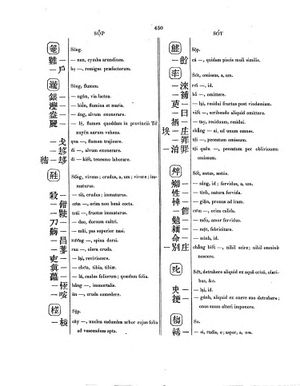 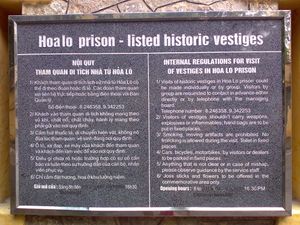 A sign at the Hỏa Lò Prison museum in Hanoi lists rules for visitors in both Vietnamese and English.

Up to the late 19th century, two writing systems based on Chinese characters were used in Vietnam.[15] All formal writing, including government business, scholarship and formal literature, was done in Classical Chinese (chữ nho قالب:Vi-nom "scholar's characters").

Folk literature in Vietnamese was recorded using the chữ Nôm script, in which many Chinese characters were borrowed and many more modified and invented to represent native Vietnamese words. Created in the 13th century or earlier, the Nôm writing reached its zenith in the 18th century when many Vietnamese writers and poets composed their works in Nôm, most notably Nguyễn Du and Hồ Xuân Hương (dubbed "the Queen of Nôm poetry"). However it was only used for official purposes during the brief Hồ and Tây Sơn dynasties.

A Vietnamese Catholic, Nguyễn Trường Tộ, sent petitions to the Court which suggested a Chinese character-based syllabary which would be used for Vietnamese sounds; however, his petition failed. The French colonial administration sought to eliminate the Chinese writing system, Confucianism, and other Chinese influences from Vietnam by getting rid of Nôm.[16]

A romanization of Vietnamese was codified in the 17th century by the French Jesuit missionary Alexandre de Rhodes (1591–1660), based on works of earlier Portuguese missionaries Gaspar do Amaral and António Barbosa. This Vietnamese alphabet (chữ quốc ngữ or "national script") was gradually expanded from its initial domain in Christian writing to become more popular among the general public. However, the Romanized script did not come to predominate until the beginning of the 20th century, when education became widespread and a simpler writing system was found more expedient for teaching and communication with the general population. Under French Indochina colonial rule, French superseded Chinese in administration. Vietnamese written with the alphabet became required for all public documents in 1910 by issue of a decree by the French Résident Supérieur of the protectorate of Tonkin. By the middle of the 20th century virtually all writing was done in chữ quốc ngữ, which became the official script on independence. Chữ nho was still in use on early North Vietnamese and late French Indochinese banknotes issued after World War II,[17][18] but fell out of official use shortly thereafter. Only a few scholars and some extremely elderly people are able to read chữ Nôm today. In China, members of the Jing minority still write in chữ Nôm.

Changes in the script were made by French scholars and administrators and by conferences held after independence during 1954–1974. The script now reflects a so-called Middle Vietnamese dialect that has vowels and final consonants most similar to northern dialects and initial consonants most similar to southern dialects (Nguyễn 1996). This Middle Vietnamese is presumably close to the Hanoi variety as spoken sometime after 1600 but before the present. (This is not unlike how English orthography is based on the Chancery Standard of Late Middle English, with many spellings retained even after the Great Vowel Shift.)

The Unicode character set contains all Vietnamese characters and the Vietnamese currency symbol. On systems that do not support Unicode, many 8-bit Vietnamese code pages are available such as Vietnamese Standard Code for Information Interchange (VSCII) or Windows-1258. Where ASCII must be used, Vietnamese letters are often typed using the VIQR convention, though this is largely unnecessary with the increasing ubiquity of Unicode. There are many software tools that help type true Vietnamese text on US keyboards, such as WinVNKey and Unikey on Windows, or MacVNKey on Macintosh.

It seems likely that in the distant past, Vietnamese shared more characteristics common to other languages in the Austroasiatic family, such as an inflectional morphology and a richer set of consonant clusters, which have subsequently disappeared from the language. However, Vietnamese appears to have been heavily influenced by its location in the Mainland Southeast Asia linguistic area, with the result that it has acquired or converged toward characteristics such as isolating morphology and phonemically distinctive tones, through processes of tonogenesis. These characteristics have become part of many of the genetically unrelated languages of Southeast Asia; for example, Tsat (a member of the Malayo-Polynesian group within Austronesian), and Vietnamese each developed tones as a phonemic feature.

The ancestor of the Vietnamese language was previously believed to have been originally based in the area of the Red River in what is now northern Vietnam but this theory has been widely rejected by modern Western scholarship, based on historical records and linguistic evidence. The Red River Delta region is now considered to be originally Tai-speaking, ethnic Li people in particular, or Austronesian-speaking. The area is believed to have become Vietnamese-speaking only between the seventh and ninth centuries AD, or even as late as the tenth century, as a result of immigration from the south, i.e., modern central Vietnam, where the highly distinctive and conservative North-Central Vietnamese dialects are spoken today. Therefore, the region of origin of Vietnamese (and the earlier Viet–Muong) was well south of the Red River.[19][20][21][22][23]

Like the ethnonym Lao, the name Yue/Việt originally referred to Tai–Kadai-speaking groups. In northern Vietnam, these later adopted Viet–Muong and further north Chinese varieties, where the designation Yue Chinese preserves the ethnonym. (Both in Vietnam and southern China, however, many Tai–Kadai languages remain in use.) This explains the fact that the same ethnonym Yue ~ Việt is associated with groups that speak Tai–Kadai, Austroasiatic and Chinese languages, which are typologically similar and share significant amounts of lexicon, but have different origins.

Linguists Sagart (2011) and Bellwood (2013) favour the middle Yangzte, although there is no direct linguistic evidence for this, and the expansion of the phylum in its present form would have to begin further south.[24]

Distinctive tonal variations emerged during the subsequent expansion of the Vietnamese language and people into what is now central and southern Vietnam through conquest of the ancient nation of Champa and the Khmer people of the Mekong Delta in the vicinity of present-day Ho Chi Minh City, also known as Saigon.

Vietnamese was primarily influenced by Chinese, which came to predominate politically in the 2nd century BC. After Vietnam achieved independence in the 10th century, the ruling class adopted Classical Chinese as the medium of government, scholarship and literature. With the dominance of Chinese came radical importation of Chinese vocabulary and grammatical influence. A portion of the Vietnamese lexicon in all realms consists of Sino-Vietnamese words (They comprise about a third of the Vietnamese lexicon, and may account for as much as 60% of the vocabulary used in formal texts.[25])

When France invaded Vietnam in the late 19th century, French gradually replaced Chinese as the official language in education and government. Vietnamese adopted many French terms, such as đầm (dame, from madame), ga (train station, from gare), sơ mi (shirt, from chemise), and búp bê (doll, from poupée). In addition, many Sino-Vietnamese terms were devised for Western ideas imported through the French.

The following diagram shows the phonology of Proto-Viet–Muong (the nearest ancestor of Vietnamese and the closely related Muong language), along with the outcomes in the modern language:[28][29][30][31]

^  The fricatives indicated above in parentheses developed as allophones of stop consonants occurring between vowels (i.e. when a minor syllable occurred). These fricatives were not present in Proto-Viet–Muong, as indicated by their absence in Muong, but were evidently present in the later Proto-Vietnamese stage. Subsequent loss of the minor-syllable prefixes phonemicized the fricatives. Ferlus 1992[28] proposes that originally there were both voiced and voiceless fricatives, corresponding to original voiced or voiceless stops, but Ferlus 2009[29] appears to have abandoned that hypothesis, suggesting that stops were softened and voiced at approximately the same time, according to the following pattern:

^  In Middle Vietnamese, the outcome of these sounds was written with a hooked b (

), representing a /β/ that was still distinct from v (then pronounced /w/). See below.

^  It is unclear what this sound was. According to Ferlus 1992,[28] in the Archaic Vietnamese period (c. 10th century AD, when Sino-Vietnamese vocabulary was borrowed) it was *r̝, distinct at that time from *r.

Note also that a large number of words were borrowed from Middle Chinese, forming part of the Sino-Vietnamese vocabulary. These caused the original introduction of the retroflex sounds /ʂ/ and /ʈ/ (modern s, tr) into the language.

Proto-Viet–Muong had no tones to speak of. The tones later developed in some of the daughter languages from distinctions in the initial and final consonants. Vietnamese tones developed as follows:

The Tale of Kieu is an epic narrative poem by the celebrated poet Nguyễn Du, (قالب:Vi-nom), which is often considered the most significant work of Vietnamese literature. It was originally written in Chữ Nôm (titled Đoạn Trường Tân Thanh قالب:Vi-nom) and is widely taught in Vietnam today.