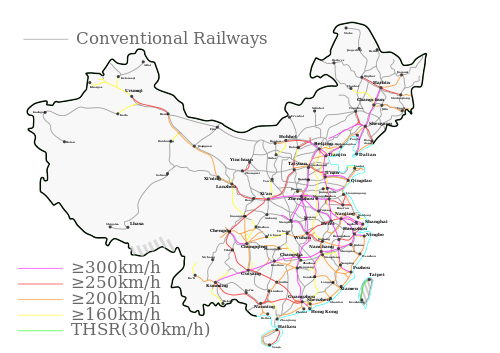 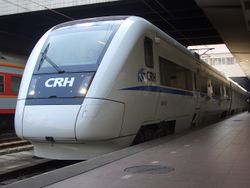 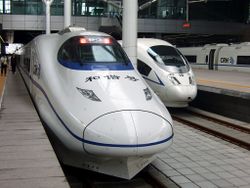 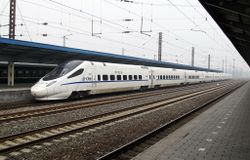 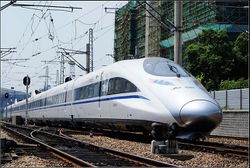 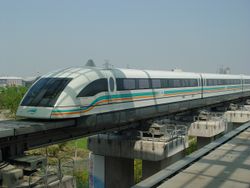 The advent of high-speed rail in China has greatly reduced travel time and has transformed Chinese society and economy. A World Bank study found "a broad range of travelers of different income levels choose HSR for its comfort, convenience, safety and punctuality."[10]

Notable HSR lines in China include the Beijing–Guangzhou high-speed railway which at 2298 km is the world's longest HSR line in operation, and the Beijing–Shanghai high-speed railway with the world's fastest operating conventional train services. The Shanghai Maglev is the world's first high-speed commercial magnetic levitation ("maglev") line, whose trains run on non-conventional track and reach a top speed of 430 كم/س (267 ميل/س).[11] In 2020, China started testing a maglev prototype train that runs at 600 km/h and planned a 2025 launch date.[12] 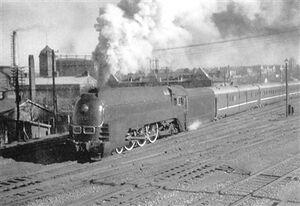 The Asia Express steam locomotive, which operated commercially from 1934 to 1943 in Manchuria could reach 130 كم/س (81 ميل/س) and was one of the fastest trains in Asia.

The earliest example of higher-speed commercial train service in China was the Asia Express, a luxury passenger train that operated in Japanese-controlled Manchuria from 1934 to 1943.[13] The steam-powered train, which ran on the South Manchuria Railway from Dalian to Xinjing (Changchun), had a top commercial speed of 110 كم/س (68 ميل/س) and a test speed of 130 كم/س (81 ميل/س).[13] It was faster than the fastest trains in Japan at the time. After the founding of the People's Republic of China in 1949, this train model was renamed the SL-7 and was used by the Chinese Minister of Railways. 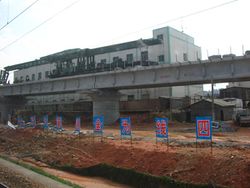 The building of the fourth line of the Guangshen Railway (pictured here in Feb. 2007) allows faster passenger train traffic to be separated from slower freight traffic. It is one of the earliest examples of a passenger dedicated line. 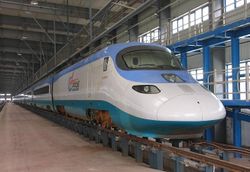 In 2002, the China Star (DJJ2) high-speed train set speed record of 292.8 كم/س (181.9 ميل/س) on the Qinshen Passenger Railway, but it was not ready for commercial use, and ultimately abandoned in favor of imported high speed train technology. 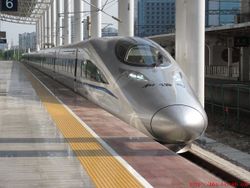 ملف:京津城际铁路-天津北站.jpg
Over 85% of track on the Beijing–Tianjin intercity railway is laid on viaducts. Chinese builders use elevated lines to keep high-speed rail tracks straight and level over uneven terrain, and to save on land acquisition costs. 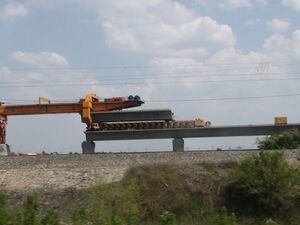 China's high-speed rail construction projects are highly capital intensive. About 40–50% of financing is provided by the national government through lending by state owned banks and financial institutions, another 40% by the bonds issued by the Ministry of Railway (MOR) and the remaining 10–20% by provincial and local governments.[15][16] The MOR, through its financing arm, the China Rail Investment Corp (CRIC), issued an estimated ¥1 trillion (US$150 billion in 2010 dollars) in debt to finance HSR construction from 2006 to 2010,[17] including ¥310 billion in the first 10 months of 2010.[18] CRIC has also raised some capital through equity offerings; in the spring of 2010, CRIC sold a 4.5 percent stake in the Beijing–Shanghai high-speed railway to the Bank of China for ¥6.6 billion and a 4.537 percent stake to the public for ¥6 billion.[17] CRIC retained 56.2 percent ownership on that line. As of 2010, the CRIC-bonds are considered to be relatively safe investments because they are backed by assets (the railways) and implicitly by the government.

Large construction debt-loads require significant revenues from rider fares, subsidies, and/or other sources of income, such as advertising, to repay. Despite impressive ridership figures, virtually every completed line has incurred losses in its first years of operation. For example, the Beijing–Tianjin intercity railway in its two full years of operation, delivered over 41 million rides. The line cost ¥20.42 billion to build, and ¥1.8 billion per annum to operate, including ¥0.6 billion in interest payments on its ¥10 billion of loan obligations.[37] The terms of the loans range from 5–10 years at interest rates of 6.3 to 6.8 percent.[37] In its first year of operation from August 1, 2008, to July 31, 2009, the line carried 18.7 million riders and generated ¥1.1 billion in revenues, which resulted in a loss of ¥0.7 billion. In the second year, ridership rose to 22.3 million and revenues improved to ¥1.4 billion, which narrowed losses somewhat to below ¥0.5 billion.[37] To break even, the line must deliver 30 million rides annually.[37] To be able to repay principal, ridership would need to exceed 40 million.[37] In September 2010, daily ridership averaged 69,000 or an annual rate of 25.2 million.[37] In 2013, ridership totaled 25.85 million.[38] The line has a capacity of delivering 100 million rides annually[39] and initial estimated repayment period of 16 years.[37]

The Shijiazhuang-Taiyuan PDL lost ¥0.8 billion in its first year and is set to lose ¥0.9 billion in 2010.[17] The Southeast HSR corridor lost ¥0.377 billion in its first year beginning August 2009.[17] The Zhengzhou-Xian HSR since opening in February 2010 was expected to generate revenues of ¥0.6 billion in its first full year but must make interest payments of ¥1.1 billion. In the first three quarters of 2012, the line lost ¥1.87 billion.[40] The losses must be covered by the operator, which is usually subsidized by local governments.[39] In December 2014, the Henan provincial government imposed a rule requiring municipal authorities pay 70% of the deficit incurred by Henan's intercity lines with the provincial authorities paying the remainder 30%.[41]

The MOR faces a debt-repayment peak in 2014.[17] Some economists recommend further subsidies to lower fares and boost ridership and ultimately revenues.[39] Others warn that the financing side of the existing construction and operation model is unsustainable.[39] If the rail-backed loans cannot be fully repaid, they may be refinanced or the banks may seize ownership of the railways.[17] To prevent that eventuality, the MOR is trying to improve management of its rapidly growing HSR holdings.[17]

Overall, ridership is growing as the high-speed rail network continues to expand. High-speed rail is also becoming relatively more affordable as fares have remained stable while worker wages have grown sharply over the same period.[42] In 2016, the high-speed rail revenue was 140.9 billion RMB Yuan (20 billion USD), while the same term interest from at least 3300 billion debt of its construction was 156.8 billion RMB Yuan (22.4 billion USD).[43] According to the World Bank, a stable long term planning and standardization of technology and design used in the high-speed rail helps to reduce financial and operational cost. Standardization of designs and procedures such as train tracks, rolling stocks, signal systems keeps the construction cost down. Moreover, State-owned corporation also uses bulk purchasing to reduce material prices.[44]

In comparison, high speed train tickets in France or Germany cost slightly over US$0.10 per kilometer and the various Shinkansen services hover above US$0.20 per kilometer.[45]

The spread of high-speed rail has forced domestic airlines in China to slash airfare and cancel regional flights.[46] The impact of high-speed rail on air travel is most acute for intercity trips under 500 kم (310 ميل).[46] By the spring of 2011, commercial airline service had been completely halted on previously popular routes such as Wuhan-Nanjing, Wuhan-Nanchang, Xi’an-Zhengzhou and Chengdu-Chongqing.[46] Flights on routes over 1,500 kم (930 ميل) are generally unaffected.[46] As of October 2013, high-speed rail was carrying twice as many passengers each month as the country's airlines.[42] 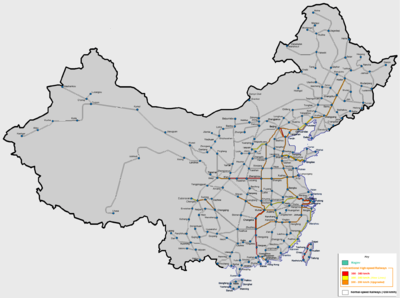 Map showing the rail network of China and Taiwan with high-speed lines highlighted in color according to the speed of train service. 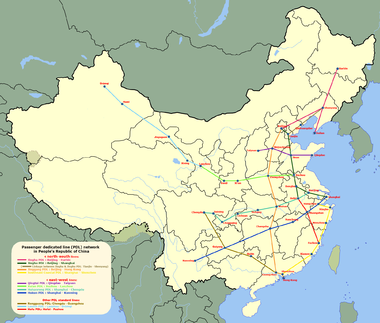 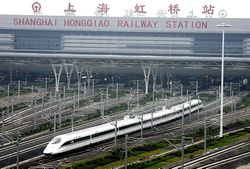 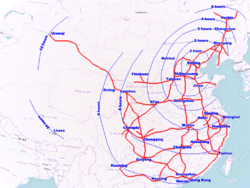 A map showing the projected high-speed rail network in China by 2020 and the travel time by rail from Beijing to each of the provincial capitals. 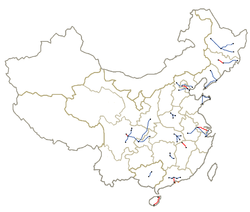 Map showing some of China's intercity railways, including lines already operational (red) and lines under construction. 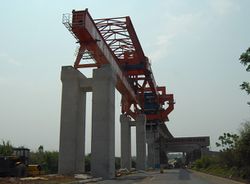 Construction of the Hainan East Ring Intercity Rail in 2009.

Intercity railways are designed to provide regional high-speed rail service between large cities and metropolitan areas that are generally within the same province. Intercity HSR service speeds range from 200 to 350 km/h. 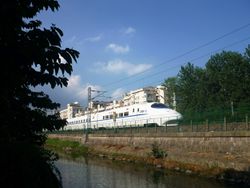 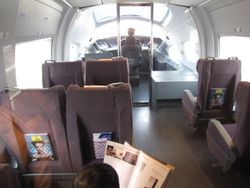 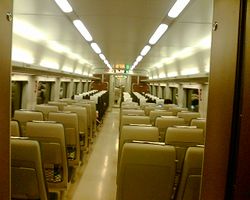 A coach compartment inside a CRH1 train. 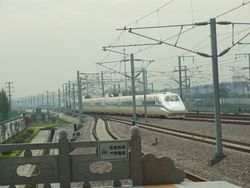 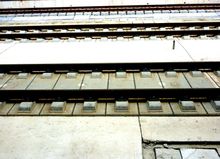 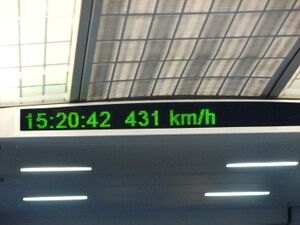 The Shanghai Maglev train, with a top speed of 431 كم/س (268 ميل/س), is the fastest train in China. The maglev train has remained confined to its original 30 kم (98,000 قدم) track as state planners chose high-speed trains that run on conventional tracks for the national HSR network.

The "fastest" train commercial service can be defined alternatively by a train's top speed or average trip speed.