According to the Sagas of Icelanders, Norse sailors (often called Vikings) from Iceland first settled Greenland in the 980s. Erik the Red explored and settled southwestern Greenland, which he named to entice potential Icelandic settlers, eventually establishing the Eastern and Western Settlements, which were abandoned around 1350.

L'Anse aux Meadows, an archaeological site on the northernmost tip of Newfoundland, and a second site in southwestern Newfoundland, are the only known sites of a Norse village in North America outside of Greenland. These sites are notable for their possible connections with the attempted colony of Vinland established by ليف إريكسون في 1003

The Viking voyages did not become common knowledge in the Old World, and Europeans remained ignorant of the existence of the Americas as a whole, until the first decades following the year 1492. Many expeditions were launched from European nations in search of a Northwest Passage to East Asia (or "the Indies" as the region was called) in order to establish a shorter trade route to China than the Silk Road, a trade route which had become desperately needed and yet exacerbated by the Fall of Constantinople. Also, the Castilian crown needed an alternative to the Portuguese controlled eastern maritime trade route around Africa to India and East Asia.

On August 3, 1492, Christopher Columbus set sail from the newly los Reyes Católicos coordinated Kingdoms of Castile and Aragon, in present-day Spain, financed by Queen Isabella I of Castille. Columbus's Letter on the First Voyage of his discovery of the Bahamas, كوبا, and Hispaniola spread the news across Europe quickly. Columbus rediscovered and explored much of the Lesser Antilles in his second voyage then discovered both Trinidad and Tobago on his third voyage whilst skirting the northern South American coast. His fourth voyage was spent scanning the Central American coast, searching for a strait to the Pacific Ocean. The Voyages of Christopher Columbus opened the New World.

Italian navigator and explorer Giovanni Caboto (known in English as John Cabot) is credited with the discovery of continental North America on June 24, 1497, under the commission of Henry VII of England. Though the exact location of his discovery remains disputed, the Canadian and United Kingdom governments' official position is that he landed on the island of Newfoundland. The English presence through Giovanni Caboto was signaled in Juan de la Cosa's map of 1500.

In 1499 João Fernandes Lavrador was licensed by the King of Manuel I of Portugal and together with Pêro de Barcelos they reached Greenland and sighted لبرادور for the first time since Leif Erikson, which was granted and named after Lavrador. After returning he possibly went to Bristol to sail in the name of England.[1] Nearly at the same time, between 1499 and 1502 the brothers Gaspar and Miguel Corte Real explored and named the coasts of Greenland, Labrador and also Newfoundland, naming "Terra Verde" the explored North American coasts.[2] Both explorations were signaled in 1502 Cantino planisphere.

It was soon understood that Columbus had not reached Asia, but rather found what was to Europeans a New World, which in 1507 was named "America", probably after Amerigo Vespucci, on the Waldseemüller map.

In 1500, Pedro Álvares Cabral was sent by Portugal to explore South America. He is considered to be the discoverer of Brazil.

Aragon King Ferdinand II sent Juan Ponce de León from the fledgling colony on Hispaniola to verify rumors of undiscovered land to the northwest. On April 2, 1513, Ponce de León disembarked on the northeast coast of what he named Florida for the crown. The exact location is disputed, but historians have offered the possibilities of St. Augustine, Ponce de León Inlet, and Melbourne Beach. He encountered the powerful تيار الخليج and found a passage through the Florida Keys to land on the southwestern Gulf Coast of Florida on the Gulf of Mexico. Again, the exact location is disputed.[3]

On September 25, 1513, Spanish conquistador Vasco Núñez de Balboa was the first European to see the Pacific Ocean once he crossed the Isthmus of Panama. He claimed all the territory touching it for the Crown, later to affect colonization of Las Californias.

Around 1519-1521, Portuguese explorer João Álvares Fagundes explored the coasts of Newfoundland, Labrador and Nova Scotia, with a mission to create colonies.

In 1524, Italian explorer Giovanni da Verrazzano sailed for King Francis I of France and is known as the first European since the Norse to explore the Atlantic coast of North America. Arriving near the Cape Fear River delta, he explored the coastlines of present-day states of South Carolina and North Carolina, entering the Pamlico Sound, and bypassing entrances to the Chesapeake Bay. Believing the New York Harbor to be a lake, he sailed past Long Island, exploring Narragansett Bay and Newfoundland.

In 1524-1525, Portuguese explorer Estevão Gomes, on behalf of Charles I of Spain, explored present-day Nova Scotia sailing South along the Maine coast. Gomes entered New York Harbor and saw the Hudson River(which he named the "San Antonio River"). Because of his expedition, the 1529 Diogo Ribeiro world map outlines the East coast of North America almost perfectly.

In 1534, Jacques Cartier planted a cross in the Gaspé Peninsula, on the Gulf Gulf of Saint Lawrence and claimed the land in the name of Francis I. In 1535 Cartier explored the St. Lawrence river and also claimed the region for France.

After two failed attempts to reach East Asia by circumnavigating Siberia, Henry Hudson sailed west in 1609 under the Dutch East India Company. He, too, passed Cape Cod, Chesapeake Bay and the Delaware Bay, instead sailing up the Hudson River on September 11, 1609 in search of a fabled connection to the Pacific via what was actually the Great Lakes. In Hudson's fourth and final voyage, he discovered, mapped, and explored the Hudson Strait, Hudson Bay and James Bay.

There were numerous Spanish explorers and conquistadors who explored the Southwest of North America (including present-day west and central United States) and cross the continent (east to west) in its southern regions, mainly from the second quarter to the middle of the 16th century, such as Álvar Núñez Cabeza de Vaca and Francisco Vásquez de Coronado, but also the North American Southeast and south-central regions, such as Hernando de Soto. 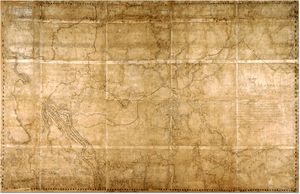 Map of the North-West Territory of the Province of Canada, stretching from the Fraser River on the west to Lake Superior on the east. By David Thompson, 1814.

In 1608 Samuel de Champlain founded what is now Quebec City, which would become the first permanent settlement and the capital of New France. He took personal administration over the city and its affairs, and sent out expeditions to explore the interior. Champlain himself discovered Lake Champlain in 1609. By 1615, he had travelled by canoe up the Ottawa River through Lake Nipissing and Georgian Bay to the centre of Huron country near Lake Simcoe. During these voyages, Champlain aided the Wendat (aka 'Hurons') in their battles against the Iroquois Confederacy. As a result, the Iroquois would become enemies of the French and be involved in multiple conflicts.

From 1679 to 1682 René-Robert Cavelier, Sieur de La Salle explored the Great Lakes region of the الولايات المتحدة and Canada, and the entire course of Mississippi River to the Gulf of Mexico.

From 1697 to 1702 Eusebio Kino explored the Sonoran Desert and on his journey to the Colorado River Delta discovered an overland route to Baja California that was then commonly believed to be an island. In 1683 Kino lead the first European overland crossing of Baja California.

European exploration of western Canada was largely motivated by the fur trade and the search for the elusive Northwest Passage. Hudson's Bay Company explorer Henry Kelsey has the distinction of being the first European to see the northern Great Plains in 1690.

Anthony Henday was the first to have seen the Rocky Mountains, in 1754, but curiously did not mention it in his journals. From his westernmost geographic position (roughly near the town of Olds, Alberta, halfway between Calgary and Red Deer, Alberta) the Rockies should have been quite conspicuous, but he was likely trying to disguise the disappointing fact that an unknown range of seemingly impassible mountains now stood between the HBC and the Pacific. Samuel Hearne found the Coppermine River in 1769-71 in his failed search for copper ore deposits. Burned by these shortfalls, the HBC largely quit exploration.

The North West Company, on the other hand, used a business model that required constant expansion into untapped areas. Under the auspices of the NWC, Alexander Mackenzie discovered the Mackenzie River in 1789 and was the first European to reach the North-American Pacific overland, via the Bella Coola River, in 1793. Simon Fraser reached the Pacific in 1808 via the Fraser River.

David Thompson, widely regarded as the greatest land geographer that ever lived, traveled over 90,000 km during his lifetime. In 1797, Thompson was sent south by his employers to survey part of the Canada-U.S. boundary along the water routes from Lake Superior to Lake of the Woods to satisfy unresolved questions of territory arising from the Jay Treaty between Great Britain and the الولايات المتحدة. By 1798 Thompson had completed a survey of 6,750 kم (4,190 ميل) from Grand Portage, through Lake Winnipeg, to the headwaters of the Assiniboine and Mississippi Rivers, as well as two sides of Lake Superior.[4] In 1798, the company sent him to Red Deer Lake (in present-day Alberta) to establish a trading post. The English translation of Lac La Biche-Red Deer Lake-first appeared on the Mackenzie map of 1793.[5] Thompson spent the next few seasons trading based in Fort George (now in Alberta), and during this time led several expeditions into the Rocky Mountains. In 1811/1812 he followed the Columbia River to the Pacific, and in 1814 used his notes and measurements to draft the first European-style map of western Canada, covering 3.9 million square kilometres.

Lewis and Clark were the first Americans to venture into the newly acquired territory of the Louisiana Purchase, at the order of President Thomas Jefferson. They discovered many new geographical features, Indian tribes, and animal and plant species. John Colter was a member of the expedition who subsequently became a guide for others in the 'Old West,' and did some explorations of his own.

Joseph Reddeford Walker was one of the most prominent of the explorers, and charted many new paths through the West, which often were then utilized by emigrants crossing to settle in Western towns and communities. In 1833, his exploring party discovered a route along the Humboldt River across present-day Nevada, ascending the Sierra Nevada following the Carson River and descending via Stanislaus River drainages to Monterey. His return route across the southern Sierra was via Walker Pass, named after Walker by John Charles Fremont. The approach of the Sierra via the Carson River route later became known as the California Trail, the primary route for the emigrants to the gold fields during the California gold rush.

As the American population of the West increased, the US government launched ongoing official explorations mainly through the US Army Corps of Topographical Engineers. One of the main officers and explorers in this unit was George Wheeler. In 1872, the US Congress authorized an ambitious plan to map the portion of the United States west of the 100th meridian at a scale of 8 miles to the inch. This plan necessitated what became known as the Wheeler Survey, along with the Clarence King and John Wesley Powell Surveys, and expeditions by Ferdinand Vandeveer Hayden. In 1879, all such efforts were reorganized as the United States Geological Survey.