José Moñino y Redondo, 1st Count of Floridablanca (October 21, 1728 – December 30, 1808) was a Spanish statesman. He was the reformist chief minister of King كارلوس الثالث من اسبانيا, and also served briefly under Charles IV. He was arguably Spain's most effective statesman in the eighteenth century. In Spain, he is simply known as Conde de Floridablanca.

وُلِد خوسيه مونيينو في مرسية في 1728 ابناً لضابط جيش متقاعد. He studied in Murcia and Orihuela, and later law at the University of Salamanca and was an esteemed advocate in the Spanish courts. He became a criminal prosecutor in Castile in 1766. He was given the task of investigating the Esquilache riots that same year and acquired a reputation as a supporter of the king's reformist policies. He defended the expulsion of the Jesuits in 1767. The chief minister at the time, the Marquis of Esquilache, recognized his ability and made Moñino Spanish ambassador to Pope Clement XIV in 1772. He was rewarded with the title "كونت فلوريدابلانكا" في 1773 لنجاحه في الحصول على دعم الپاپا لإخماد الجزويت. 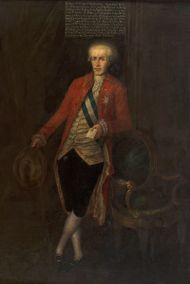 Floridablanca was named chief minister in 1777. He embarked on a thorough reform of the Spanish bureaucracy, establishing a true cabinet in 1787 (the Supreme Council of State). He established commercial freedom in the American colonies in 1778, founded the National Bank of San Carlos in 1782. He involved himself in university reform (Spain's universities had become increasingly lax since the 16th century) and improved press liberties. After the expulsion of the Jesuits, Spain's higher education system was left woefully understaffed; Floridablanca worked to hire new teachers and administrators and to modernize pedagogical methods. He also established new schools throughout Spain.

During his tenure, Madrid was rebuilt; a great deal of the city dates from this period. Floridablanca regulated the Madrid police and encouraged public works in the city.

As master of Spain's foreign policy, Floridablanca sought prominently to restore the economic well-being of Spain. He concluded trade agreements with Morocco and the Ottoman Empire and believed that good relations with Great Britain were key to Spain's growth. In spite of this, he was drawn reluctantly into the American War of Independence on the side of France and the American rebels. The war generally went well for Spain and Floridablanca succeeded in restoring much of Spain's prestige during the conflict and in 1782 Britain returned the island of Menorca, in the Baleares, and Florida to Spain. However attempts to capture Gibraltar, Jamaica and invade Britain met with failure. During the war Spain negotiated for a separate peace with Britain, in spite of its alliance with France. Talks were held between Richard Cumberland and Thomas Hussey. These discussions ultimately fell through, and Spain was a signatory of the Peace of Paris in 1783.

Long-standing disputes with Portugal over the American colonies were resolved under Floridablanca's ministry and in the process Fernando Pó, أنوبون و ريو موني (غينيا الإستوائية الحالية) were acquired from Portugal. Floridablanca strove to carve out an independent foreign policy for Spain, distancing the country from France which Spain had been a virtual satellite of since the War of the Spanish Succession. 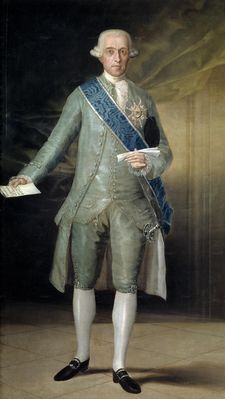 With the outbreak of the French Revolution in 1789 the liberal movement in Spain - which, in his own way, Floridablanca personified - was shocked to a halt. Floridablanca was forced to react to the situation and supported the First Coalition against revolutionary France. The events in France discredited the reformers at court and contributed to their downfall in the following years.

His centralist policies brought him into conflict with regional interests and he was often at odds with the Aragonese faction at court which enjoyed many traditional liberties from the central government. The Aragonese faction, supported by the queen's lover Manuel de Godoy and the Count of Aranda, finally succeeded in ousting Floridablanca from power in 1792 on charges of embezzlement. Floridablanca was imprisoned at the castle of Pamplona for three years and only released after the intervention of his brother. He was acquitted in 1795, although the ordeal weighed heavily upon him and he retired to seclusion on his estates.

When Napoleon marched against Spain in 1808, there was a public outcry for Floridablanca to lead the country in resistance. He accepted the call and became the President of the Supreme Central and Governmental Junta but, at the age of eighty, his strength failed him and he died at Seville on November 20 that year.

Although an avid statesman, he left few writings, and only a few short treatises by his hand on jurisprudence were published during his lifetime.

Plant genus Monnina was named after him.