اللغة الپونيقية Punic language، تُدعى أيضاً القرطاجية[2] أو الفينيقو-پونيقية، هي تنويعة منقرضة من اللغة الفينيقية، a Canaanite language of the Semitic family. It was spoken in the Carthaginian empire in Northwest Africa and several Mediterranean islands by the Punic people throughout Classical antiquity, from the 8th century BC to the 5th century AD.

The Punics stayed in contact with Phoenicia until the destruction of Carthage by the Roman Republic in 146 BC. While Punic was spoken, it underwent many changes under Berber influence. At first, there was not much difference between Phoenician and Punic, but as time went on and Carthage and its colonies lost contact with Phoenicia, Punic began to become influenced less by Phoenicia but more by the Berber languages spoken in and around Carthage by the ancient Libyans.

The term Neo-Punic is used in two senses: one pertaining to the Phoenician alphabet and the other to the language itself. In the present context, Neo-Punic refers to the dialect of Punic spoken after the fall of Carthage and after the Roman conquest of the former Punic territories in 146 BC. The dialect differed from the earlier Punic language, as is evident from divergent spelling compared to earlier Punic and by the use of non-Semitic names, mostly of Libyco-Berber origin. The difference was due to the dialectal changes that Punic underwent as it spread among the North-African peoples.[3] Neo-Punic works include Lepcis Magna N 19 (92 AD).

By around the fourth century AD, Punic was still spoken in what is now Tunisia, other parts of Northwest Africa, and the Mediterranean. The Neo-Punic alphabet also descended from the Punic language. By around 400, the first meaning of Punic was used mainly for monumental inscriptions, replaced by the cursive Neo-Punic alphabet elsewhere.[4] Examples of Punic literary works cover the topic of Mago, a Punic general with great notoriety, who spread Carthage's influence as much through writing books as he did fighting. Mago wrote 28 volumes about animal husbandry. 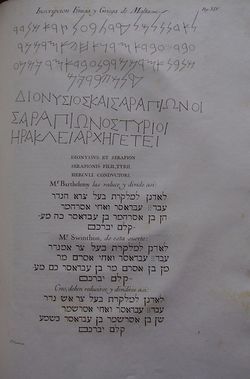 The Roman Senate appreciated the works so much that after taking Carthage, they presented them to Berber princes who owned libraries there. Mago's work was translated into Greek by Cassius Dionysius of Utica. The Latin version was probably translated from the Greek version. Further examples of Punic works of literature include the works of Hanno the Navigator, who wrote about his encounters during his naval voyages around Africa and about the settling of new colonies.[5]

A third version of Punic would be Latino-Punic, a Punic written in the Latin alphabet, but all of the spellings favoured the Northwest African pronunciation. Latino-Punic was spoken until the 3rd and the 4th centuries and was recorded in seventy recovered texts. The surprising survival of Punic under Roman rule was because the people speaking it did not have much contact with Rome, and so did not need to learn Latin.[بحاجة لمصدر]

Latino-Punic texts include the 1st-century Zliten LP1, or the second-century Lepcis Magna LP1.[مطلوب توضيح] They were even written as late as the 4th century, Bir ed-Dreder LP2. Classical sources such as Strabo (63/4 BC – AD 24), mention the Phoenician conquest of Libya.

There is evidence that every form of Punic changed after 146 BC according to Sallust (86 – 34 BC), who claims Punic was "altered by their intermarriages with the Numidians". That account agrees with other evidence found to suggest a North-African influence on Punic, such as Libyco-Berber names in the Onomasticon of Eusebius.قالب:Ambiguous The last known testimony reporting Punic as a living language is that of Augustine of Hippo (d. 430).

Punic is known from inscriptions (most of them religious formulae) and personal name evidence. The play Poenulus by Plautus contains a few lines of vernacular Punic which have been subject to some research because unlike inscriptions, they largely preserve the vowels.[6]

Augustine of Hippo is generally considered the last major ancient writer to have some knowledge of Punic and is considered the "primary source on the survival of [late] Punic". According to him, Punic was still spoken in his region (Northern Africa) in the 5th century, centuries after the fall of Carthage, and there were still people who called themselves "chanani" (Canaanite: Carthaginian) at that time.[3]:4 He wrote around 401:

Quae lingua si improbatur abs te, nega Punicis libris, ut a viris doctissimis proditur, multa sapienter esse mandata memoriae. Poeniteat te certe ibi natum, ubi huius linguae cunabula recalent. And if the Punic language is rejected by you, you virtually deny what has been admitted by most learned men, that many things have been wisely preserved from oblivion in books written in the Punic tongue. Nay, you ought even to be ashamed of having been born in the country in which the cradle of this language is still warm.[7]

Besides Augustine, the only proof of Punic-speaking communities at such a late period is a series of trilingual funerary texts found in the Christian catacombs of Sirte, Libya: the gravestones are carved in Ancient Greek, Latin and Punic. It may have even survived the Muslim conquest of the Maghreb, as the geographer al-Bakri describes a people speaking a language that was not Berber, Latin or Coptic in Sirte, where spoken Punic survived well past written use.[8] However, it is likely that Arabization of the Punics was facilitated by their language belonging to the same group (both were Semitic languages) as that of the conquerors and so they had many grammatical and lexical similarities.[3]:71

The idea that Punic was the origin of Maltese was first raised in 1565.[9] Modern linguistics has proved that Maltese is in fact derived from Arabic, probably Siculo-Arabic specifically, with a large number of loanwords from Italian.[10] However, Punic was indeed spoken on the island of Malta at some point in its history, as evidenced by both the Cippi of Melqart, which is integral to the decipherment of Punic after its extinction, and other inscriptions that were found on the islands. Punic itself, being Canaanite, was more similar to Modern Hebrew than to Arabic.

Like its Phoenician parent, Punic was written from right to left, in horizontal lines, without vowels.[4]

Act V of Poenulus opens with Hanno speaking in Punic, his native language. The language of the next few lines (italicized) is uncertain but is believed to be "Lybic" [ك‍] (likely a misspelling of Libyc, a reference to one of the Berber languages) or Hebrew, if not Punic. Plautus then provides a Latin translation of the preceding lines:[12]

An English translation is as follows:

I worship the gods and goddesses who preside over this city, that I may have come hither with good omen as to this business of mine, on which I have come; and, ye gods, lend me your aid, that you may permit me to find my daughters and the son of my cousin; those who were stolen away from me, and his son from my cousin. But here lived formerly my guest Antidamas. They say that he has done that which he was doomed to do. They say that his son Agorastocles lives here. To him am I carrying with me this token of hospitality. He has been pointed as living in this neighbourhood. I'll make enquiry of these who are coming hither out of doors.[12]