Oil tankers are often classified by their size as well as their occupation. The size classes range from inland or coastal tankers of a few thousand metric tons of deadweight (DWT) to the mammoth ultra large crude carriers (ULCCs) of 550,000 بالطن. Tankers move approximately 2.0 billion طن متري (2.2 billion short tons) of oil every year.[3][4] Second only to pipelines in terms of efficiency,[4] the average cost of transport of crude oil by tanker amounts to only US[convert: unit mismatch] ($0.02 to $0.03 per غالون أمريكي).[4]

Some specialized types of oil tankers have evolved. One of these is the naval replenishment oiler, a tanker which can fuel a moving vessel. Combination ore-bulk-oil carriers and permanently moored floating storage units are two other variations on the standard oil tanker design. Oil tankers have been involved in a number of damaging and high-profile oil spills. As a result, they are subject to stringent design and operational regulations. 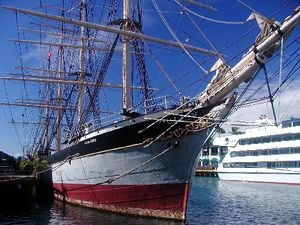 The Falls of Clyde is the oldest surviving American tanker and the world's only surviving sail-driven oil tanker.[5]

The technology of oil transportation has evolved alongside the oil industry. Although human use of oil reaches to prehistory, the first modern commercial exploitation dates back to James Young's manufacture of paraffin in 1850.[6] In the early 1850s, oil began to be exported from Upper Burma, then a British colony. The oil was moved in earthenware vessels to the river bank where it was then poured into boat holds for transportation to Britain.[7]

In the 1860s, Pennsylvania oil fields became a major supplier of oil, and a center of innovation after Edwin Drake had struck oil near Titusville, Pennsylvania.[8] Break-bulk boats and barges were originally used to transport Pennsylvania oil in 40-غالون-أمريكي (150 ل) wooden barrels.[8] But transport by barrel had several problems. The first problem was weight: they weighed 29 kiloغرامs (64 رطل), representing 20% of the total weight of a full barrel.[9] Other problems with barrels were their expense, their tendency to leak, and the fact that they were generally used only once. The expense was significant: for example, in the early years of the Russian oil industry, barrels accounted for half the cost of petroleum production.[9] 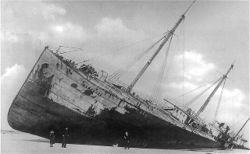 The Glückauf grounded in heavy fog at Blue Point Beach on Fire Island. 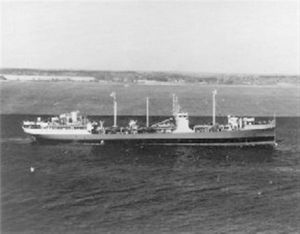 Underway replenishment was pioneered aboard the USS Maumee 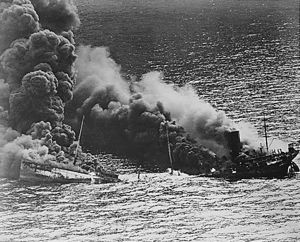 Until 1956, tankers were designed to be able to navigate the Suez Canal.[10] This size restriction became much less of a priority after the closing of the canal during the Suez Crisis of 1956.[10] Forced to move oil around the Cape of Good Hope, shipowners realized that bigger tankers were the key to more efficient transport.[10][11] While a typical T2 tanker of the World War II era was 162 مترs (532 قدم) long and had a capacity of 16,500 بالطن, the ultra-large crude carriers (ULCC) built in the 1970s were over 400 مترs (1,300 قدم) long and had a capacity of 500,000 بالطن.[12] Several factors encouraged this growth. Hostilities in the Middle East which interrupted traffic through the Suez Canal contributed, as did nationalization of Middle East oil refineries.[11] Fierce competition among shipowners also played a part.[11] But apart from these considerations is a simple economic advantage: the larger an oil tanker is, the more cheaply it can move crude oil, and the better it can help meet growing demands for oil.[11] 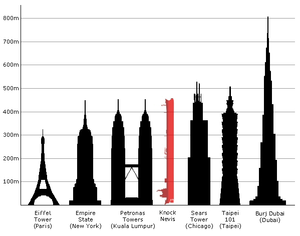 With the exception of the pipeline, the tanker is the most cost-effective way to move oil today.[27] Worldwide, tankers carry some 2 بليون برميلs (3.2×1011 ل) annually, and the cost of transportation by tanker amounts to only US$0.02 per gallon at the pump.[27] 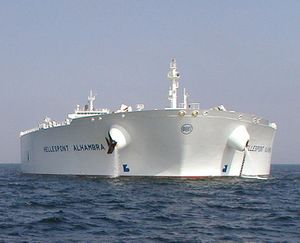 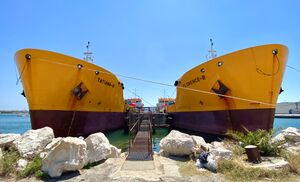 Tatiana B and Florence B two bunkering tankers

In 1954, Shell Oil developed the "average freight rate assessment" (AFRA) system which classifies tankers of different sizes. To make it an independent instrument, Shell consulted the London Tanker Brokers' Panel (LTBP). At first, they divided the groups as General Purpose for tankers under 25,000 بالطن; Medium Range for ships between 25,000 and 45,000 بالطن and Long Range for the then-enormous ships that were larger than 45,000 بالطن. The ships became larger during the 1970s, which prompted rescaling.[28]

The system was developed for tax reasons as the tax authorities wanted evidence that the internal billing records were correct. Before the New York Mercantile Exchange started trading crude oil futures in 1983, it was difficult to determine the exact price of oil, which could change with every contract. Shell and BP, the first companies to use the system, abandoned the AFRA system in 1983, later followed by the US oil companies. However, the system is still used today. Besides that, there is the flexible market scale, which takes typical routes and lots of 500,000 برميلs (79,000 م3).[31]

Merchant oil tankers carry a wide range of hydrocarbon liquids ranging from crude oil to refined petroleum products.[2] Their size is measured in deadweight metric tons (DWT). Crude carriers are among the largest, ranging from 55,000 بالطن Panamax-sized vessels to ultra-large crude carriers (ULCCs) of over 440,000 بالطن.[32]

Smaller tankers, ranging from well under 10,000 بالطن to 80,000 بالطن Panamax vessels, generally carry refined petroleum products, and are known as product tankers.[32] The smallest tankers, with capacities under 10,000 بالطن generally work near-coastal and inland waterways.[32] Although they were in the past, ships of the smaller Aframax and Suezmax classes are no longer regarded as supertankers.[33] 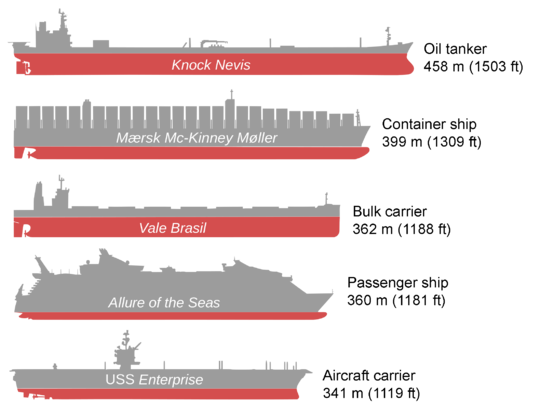 Because of their size, supertankers often cannot enter port fully loaded.[11] These ships can take on their cargo at offshore platforms and single-point moorings.[11] On the other end of the journey, they often pump their cargo off to smaller tankers at designated lightering points off-coast.[11] Supertanker routes are typically long, requiring them to stay at sea for extended periods, often around seventy days at a time.[11] 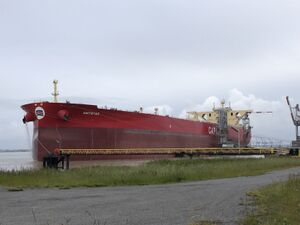 The act of hiring a ship to carry cargo is called chartering. Tankers are hired by four types of charter agreements: the voyage charter, the time charter, the bareboat charter, and contract of affreightment.[36] In a voyage charter the charterer rents the vessel from the loading port to the discharge port.[36] In a time charter the vessel is hired for a set period of time, to perform voyages as the charterer directs.[36] In a bareboat charter the charterer acts as the ship's operator and manager, taking on responsibilities such as providing the crew and maintaining the vessel.[37] Finally, in a contract of affreightment or COA, the charterer specifies a total volume of cargo to be carried in a specific time period and in specific sizes, for example a COA could be specified as 1 مليون برميل (160,000 م3) of JP-5 in a year's time in 25,000-برميل (4,000 م3) shipments.[38] A completed chartering contract is known as a charter party.[38]

One of the key aspects of any charter party is the freight rate, or the price specified for carriage of cargo.[39] The freight rate of a tanker charter party is specified in one of four ways: by a lump sum rate, by rate per ton, by a time charter equivalent rate, or by Worldscale rate.[39] In a lump sum rate arrangement, a fixed price is negotiated for the delivery of a specified cargo, and the ship's owner/operator is responsible to pay for all port costs and other voyage expenses.[40] Rate per ton arrangements are used mostly in chemical tanker chartering, and differ from lump sum rates in that port costs and voyage expenses are generally paid by the charterer.[41] Time charter arrangements specify a daily rate, and port costs and voyage expenses are also generally paid by the charterer.[41]

From 2003, the demand for new ships started to grow, resulting in 2007 in a record breaking order backlog for shipyards, exceeding their capacity with rising newbuilding prices as a result.[47] This resulted in a glut of ships when demand dropped due to a weakened global economy and dramatically reduced demand in the United States. The charter rate for very large crude carriers, which carry two million barrels of oil, had peaked at $309,601 per day in 2007 but had dropped to $7,085 per day by 2012, far below the operating costs of these ships.[48] As a result, several tanker operators laid up their ships. Prices rose significantly in 2015 and early 2016, but delivery of new tankers was projected to keep prices in check.[43] 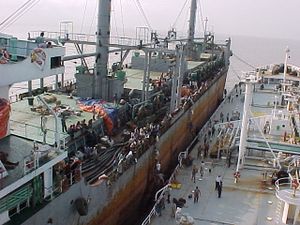 Tankers may carry unusual cargoes such as grain on their final trip to the scrapyard. 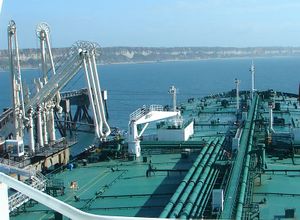 Cargo flows between a tanker and a shore station by way of marine loading arms attached at the tanker's cargo manifold. 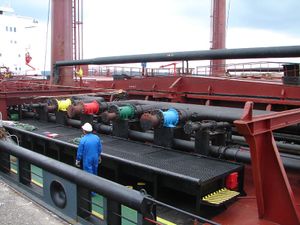 Oil is pumped on and off the ship by way of connections made at the cargo manifold. 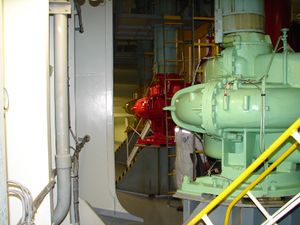 This cargo pump aboard a VLCC can move 5,000 cubic meters of product per hour. 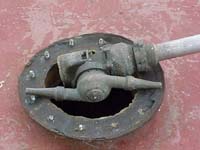 The nozzle of an automated tank cleaning machine 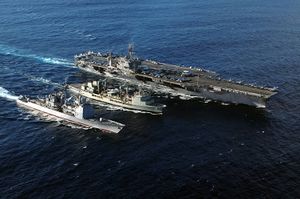 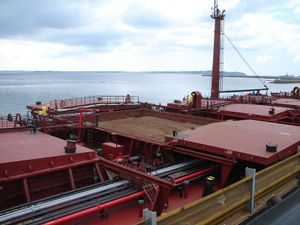 The OBO-carrier Maya. The picture is showing both the cargo hold hatches used for bulk and the pipes used for oil 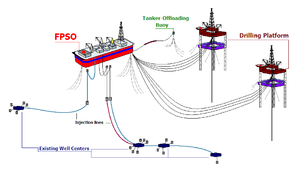 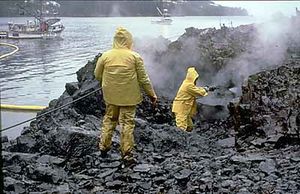