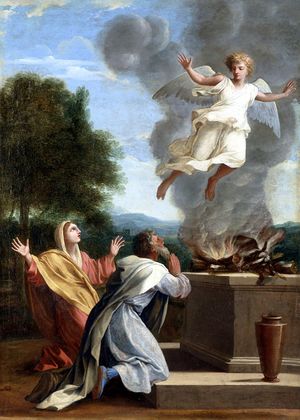 According to the account in the Book of Judges, Samson lived during a time of repeated conflict between Israel and Philistia, when God was disciplining the Israelites by giving them "into the hand of the Philistines".[1] Manoah was an Israelite from Zorah, descended from the Danites,[2] and his wife had been unable to conceive.[3][4] The Angel of the Lord appeared to Manoah's wife and proclaimed that the couple would soon have a son who would begin to deliver the Israelites from the Philistines.[5]

The Angel of the Lord stated that Manoah's wife was to abstain from all alcoholic drinks, unclean foods, and her promised child was not to shave or cut his hair. He was to be a Nazirite from birth. In ancient Israel, those wanting to be especially dedicated to God for a time could take a Nazirite vow which included abstaining from wine and spirits, not cutting hair or shaving, and other requirements.[3][4][5] Manoah's wife believed the Angel of the Lord; her husband was not present, so he prayed and asked God to send the messenger once again to teach them how to raise the boy who was going to be born.

After the Angel of the Lord returned, Manoah asked him his name, but he said, "Why do you ask my name? It is beyond understanding."[6] Manoah then prepared a sacrifice, but the Angel of the Lord would only allow it to be for God. He touched it with his staff, miraculously engulfing it in flames, and then ascended into the sky in the fire. This was such dramatic evidence of the nature of the Messenger that Manoah feared for his life, since it was said that no one could live after seeing God. However, his wife convinced him that, if God planned to slay them, he would never have revealed such things to them. In due time, their son Samson was born, and he was raised according to the Angel's instructions.[4][5]

When he was a young adult, Samson left the hills of his people to see the cities of Philistia. He fell in love with a Philistine woman from Timnah, whom he decided to marry, ignoring the objections of his parents over the fact that she was non-Israelite.[4][5][7] In the development of the narrative, the intended marriage was shown to be part of God's plan to strike at the Philistines.[5]

According to the biblical account, Samson was repeatedly seized by the "Spirit of the Lord," who blessed him with immense strength. The first instance of this is seen when Samson was on his way to ask for the Philistine woman's hand in marriage, when he was attacked by a lion. He simply grabbed it and ripped it apart, as the spirit of God divinely empowered him. However, Samson kept it a secret, not even mentioning the miracle to his parents.[5][8][9] He arrived at the Philistine's house and became betrothed to her. He returned home, then came back to Timnah some time later for the wedding. On his way, Samson saw that bees had nested in the carcass of the lion and made honey.[5][9] He ate a handful of the honey and gave some to his parents.[5]

At the wedding feast, Samson told a riddle to his thirty groomsmen (all Philistines). If they could solve it, he would give them thirty pieces of fine linen and garments, but if they could not solve it, they would give him thirty pieces of fine linen and garments.[4][5] The riddle was a veiled account of two encounters with the lion, at which only he was present:[5][9]

The Philistines were infuriated by the riddle.[5] The thirty groomsmen told Samson's new wife that they would burn her and her father's household if she did not discover the answer to the riddle and tell it to them.[5][9] At the urgent and tearful imploring of his bride, Samson told her the solution, and she told it to the thirty groomsmen.[4][5] 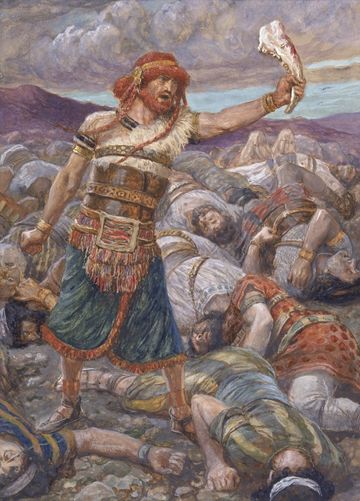 Before sunset on the seventh day they said to him,

What is sweeter than honey?
and what is stronger than a lion?

Samson said to them,

If you had not plowed with my heifer,
you would not have solved my riddle.[11]

Samson then traveled to Ashkelon (a distance of roughly 30 miles) where he slew thirty Philistines for their garments; he then returned and gave those garments to his thirty groomsmen.[4][9][12] In a rage, Samson returned to his father's house. The family of his would-have-been bride instead gave her to one of the groomsmen as wife.[4][9][12] Some time later, Samson returned to Timnah to visit his wife, unaware that she was now married to one of his former groomsmen. But her father refused to allow Samson to see her, offering to give Samson a younger sister instead.[4][12]

Samson went out, gathered 300 foxes, and tied them together in pairs by their tails. He then attached a burning torch to each pair of foxes' tails and turned them loose in the grain fields and olive groves of the Philistines.[13] The Philistines learned why Samson burned their crops and burned Samson's wife and father-in-law to death in retribution.[4][12][14]

In revenge, Samson slaughtered many more Philistines, saying, "I have done to them what they did to me."[4][12] Samson then took refuge in a cave in the rock of Etam.[4][12][15] An army of Philistines came to the Tribe of Judah and demanded that 3,000 men of Judah deliver them Samson.[4][15] With Samson's consent, given on the condition that the Judahites would not kill him themselves, they tied him with two new ropes and were about to hand him over to the Philistines when he broke free of the ropes.[14][15] Using the jawbone of a donkey, he slew 1,000 Philistines.[14][15][16] 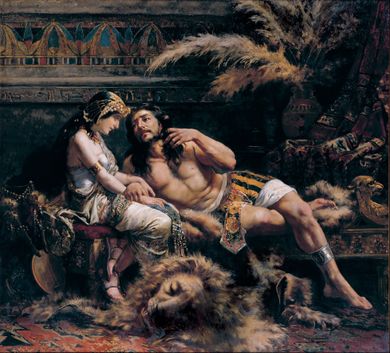 Samson and Delilah (1887) by Jose Etxenagusia

Later, Samson travels to Gaza, where he stays at a harlot's house.[12][17] His enemies wait at the gate of the city to ambush him, but he tears the gate from its very hinges and frame and carries it to "the hill that is in front of Hebron".[12][17]

He then falls in love with Delilah in the valley of Sorek.[12][14][17][18] The Philistines approach Delilah and induce her with 1,100 silver coins to find the secret of Samson's strength so that they can capture their enemy,[12][17] but Samson refuses to reveal the secret and teases her, telling her that he will lose his strength if he is bound with fresh bowstrings.[12][17] She does so while he sleeps, but when he wakes up he snaps the strings.[12][17] She persists, and he tells her that he can be bound with new ropes. She ties him up with new ropes while he sleeps, and he snaps them, too.[12][17] She asks again, and he says that he can be bound if his locks are woven into a weaver's loom.[12][17] She weaves them into a loom, but he simply destroys the entire loom and carries it off when he wakes.[12][17]

Delilah, however, persists and Samson finally capitulates and tells Delilah that God supplies his power because of his consecration to God as a Nazirite, symbolized by the fact that a razor has never touched his head, and that if his hair is cut off he will lose his strength.[19][20][12][18] Delilah then woos him to sleep "in her lap" and calls for a servant to cut his hair.[12] Samson loses his strength and he is captured by the Philistines who blind him by gouging out his eyes.[12] They then take him to Gaza, imprison him, and put him to work turning a large millstone and grinding grain.[17] 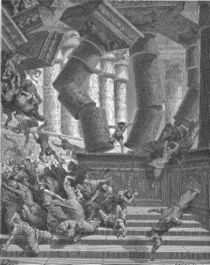 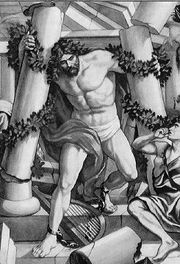 According to the biblical narrative, Samson died when he grasped two pillars of the Temple of Dagon and "bowed himself with all his might" (Judges 16:30, KJV). This has been variously interpreted as Samson pushing the pillars apart (left) or pulling them together (right).

One day, the Philistine leaders assemble in a temple for a religious sacrifice to Dagon, one of their most important deities, for having delivered Samson into their hands.[17][21] They summon Samson so that people can watch him perform for them. The temple is so crowded that people are even climbing onto the roof to watch—and all the rulers of the entire government of Philistia have gathered there too, some 3,000 people in all.[18][21][22] Samson is led into the temple, and he asks his captors to let him lean against the supporting pillars to rest. However, whilst in prison his hair had begun to grow again.[23] He prays for strength and God gives him strength to break the pillars, causing the temple to collapse, killing him and the people inside.[24]

After his death, Samson's family recovered his body from the rubble and buried him near the tomb of his father Manoah.[21] A tomb structure which some attribute to Samson and his father stands on the top of the mountain in Tel Tzora.[25] At the conclusion of Judges 16, it is said that Samson had "judged" Israel for twenty years.[15] The Bible does not mention the fate of Delilah.[18]