The Reserve Bank of India (RBI) is India's central bank, which controls the issue and supply of the Indian rupee. RBI is the regulator of entire Banking in India. RBI plays an important part in the Development Strategy of the Government of India.

RBI regulates commercial banks and non-banking finance companies working in India.It serves as the leader of the banking system and the money market.It regulates money supply and credit in the country.The RBI carries out India's monetary policy and exercises supervision and control over banks and non-banking finance companies in India. RBI was set up in 1935 under the Reserve Bank of India Act,1934.

Until the Monetary Policy Committee was established in 2016,[6] it also controlled monetary policy in India.[7] It commenced its operations on 1 April 1935 in accordance with the Reserve Bank of India Act, 1934.[8] The original share capital was divided into shares of 100 each fully paid .[9] Following India's independence on 15 August 1947, the RBI was nationalised on 1 January 1949.[10]

It is a member bank of the Asian Clearing Union. The general superintendence and direction of the RBI is entrusted with the 21-member central board of directors: the governor; four deputy governors; two finance ministry representatives (usually the Economic Affairs Secretary and the Financial Services Secretary); ten government-nominated directors to represent important elements of India's economy; and four directors to represent local boards headquartered at Mumbai, Kolkata, Chennai and the capital New Delhi. Each of these local boards consists of five members who represent regional interests, the interests of co-operative and indigenous banks. 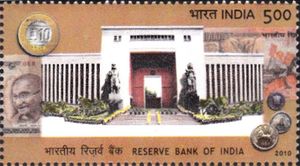 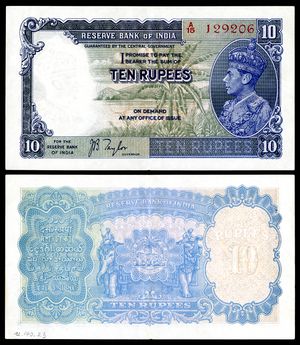