There are many forms of communication, including human linguistic communication using sounds, sign language, and writing as well as animals exchanging information and attempts to communicate with intelligent extraterrestrial life.

Communication is usually defined as the transmission of information. The term can also refer to the message itself or the field of inquiry studying these transmissions, also known as communication studies. There are some disagreements about the precise definition of communication, for example, whether unintentional or failed transmissions are also included and whether communication does not just transmit meaning but also create it. Models of communication aim to provide a simplified overview of its main components and their interaction. Many models include the idea that a source uses a coding system to express information in the form of a message. The source uses a channel to send the message to a receiver who has to decode it in order to understand its meaning. Channels are usually discussed in terms of the senses used to perceive the message, like hearing, sight, smell, touch, and taste.

Non-human forms of communication include animal and plant communication. Researchers in this field often formulate additional criteria for their definition of communicative behavior, like the requirement that the behavior serves a beneficial function for natural selection or that a response to the message is observed. Animal communication plays important roles for various species in the areas of courtship and mating, parent-offspring relations, social relations, navigation, self-defense, and territoriality. In the area of courtship and mating, for example, communication is used to identify and attract potential mates. An often-discussed example concerning navigational communication is the waggle dance used by bees to indicate to other bees where flowers are located. Due to the rigid cell walls of plants, their communication often happens through chemical means rather than movement. For example, various plants, like maple trees, release so-called volatile organic compounds into the air to warn other plants of a herbivore attack. Most communication takes place between members of the same species since its purpose is usually some form of cooperation, which is not as common between species. However, there are also forms of interspecies communication, mainly in cases of symbiotic relationships. For example, many flowers use symmetrical shapes and colors that stand out from their surroundings in order to communicate to insects where nectar is located to attract them. Humans also practice interspecies communication, for example, when interacting with pets.

The field of communication includes various other issues, like communicative competence and the history of communication. Communicative competence refers to the ability to communicate well and applies both to the capability to formulate messages and to understand them. Two central aspects are that the communicative behavior is effective, i.e. that it achieves the individual's goal, and that it is appropriate, i.e. that it follows social standards and expectations. Human communication has a long history and how people exchange information has changed over time. These changes were usually triggered by the development of new communication technologies, such as the invention of writing systems (first pictographic and later alphabetic), the development of mass printing, the use of radio and television, and the invention of the internet.

The word "communication" has its root in the Latin verb "communicare", which means "to share" or "to make common".[1] Communication is usually understood as the transmission of information.[2][3][4] In this regard, a message is conveyed from a sender to a receiver using some form of medium, such as sound, paper, bodily movements, or electricity.[5][6][7] In a different sense, the term "communication" can also refer just to the message that is being communicated or to the field of inquiry studying such transmissions.[2][4] There is a lot of disagreement concerning the precise characterization of communication and various scholars have raised doubts that any single definition can capture the term accurately. These difficulties come from the fact that the term is applied to diverse phenomena in different contexts, often with slightly different meanings.[8][9] Despite these problems, the question of the right definition is of great theoretical importance since it affects the research process on all levels. This includes issues like which empirical phenomena are observed, how they are categorized, which hypotheses and laws are formulated as well as how systematic theories based on these steps are articulated.[8]

Some theorists give very broad definitions of communication that encompass unconscious and non-human behavior.[8] In this regard, many animals communicate within their own species and even plants like flowers may be said to communicate by attracting bees.[5] Other researchers restrict communication to conscious interactions among human beings.[8][5] Some definitions focus on the use of symbols and signs while others emphasize the role of understanding, interaction, power, or transmission of ideas. Various characterizations see the communicator's intent to send a message as a central component. On this view, the transmission of information is not sufficient for communication if it happens unintentionally.[8][10] An important version of this view is given by Paul Grice, who identifies communication with actions that aim to make the recipient aware of the communicator's intention.[11] One question in this regard is whether only the successful transmission of information should be regarded as communication.[8] For example, distortion may interfere and change the actual message from what was originally intended.[6] A closely related problem is whether acts of deliberate deception constitute communication.[8]

According to an influential and broad definition by I. A. Richards, communication happens when one mind acts upon its environment in order to transmit its own experience to another mind.[12][13][14] Another important characterization is due to Claude Shannon and Warren Weaver. On their view, communication involves the interaction of several components, such as a source, a message, an encoder, a channel, a decoder, and a receiver.[15][16] Various contemporary scholars hold that communication is not just about the transmission of information but also about creating meaning. This way, communication shapes the participant's experience by conceptualizing the world and making sense of their environment and themselves.[17] In regard to animal and plant communication, researchers focus less on meaning-making but often include additional requirements in their definition, for example, that the communicative behavior plays a beneficial role in natural selection or that some kind of response to the message is observed.[18][19][20] The paradigmatic form of communication happens between two or several individuals. However, it can also take place on a larger level, for example, between organizations, social classes, or nations.[5] Niklas Luhmann rejects the view that communication is, on its most fundamental level, an interaction between two distinct parties. Instead, he holds that "only communication can communicate" and tries to provide a conceptualization in terms of autopoietic systems without any reference to consciousness or life.[21] 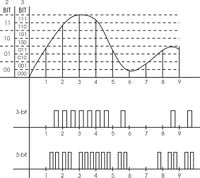 Shannon and Weaver Model of Communication 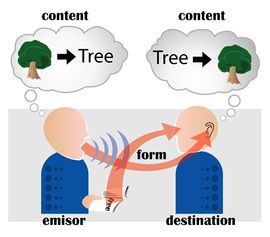 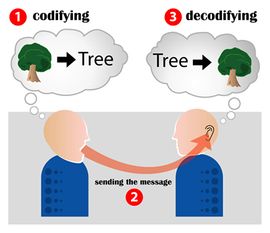 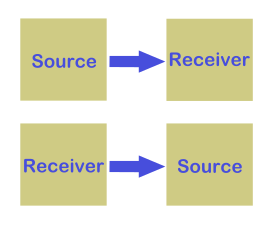 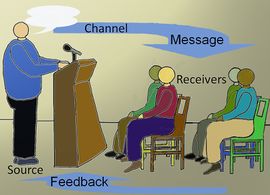