Anawrahta Minsaw (بالبورمية: အနော်ရထာ မင်းစော, تـُنطق [ʔənɔ̀jətʰà mɪ́ɴ sɔ́]; 11 May 1014 – 11 April 1077) was the founder of the Pagan Empire. Considered the father of the Burmese nation, Anawrahta turned a small principality in the dry zone of Upper Burma into the first Burmese Empire that formed the basis of modern-day Burma (Myanmar).[2][3] Historically verifiable Burmese history begins with his accession to the Pagan throne in 1044.[4]

Anawrahta unified the entire Irrawaddy valley for the first time in history, and placed peripheral regions such as the Shan States and Arakan (Northern Rakhine) under Pagan's suzerainty. He successfully stopped the advance of Khmer Empire into Tenasserim coastline and into Upper Menam valley, making Pagan one of two main kingdoms in mainland Southeast Asia.

A strict disciplinarian, Anawrahta implemented a series of key social, religious and economic reforms that would have a lasting impact in Burmese history. His social and religious reforms later developed into the modern-day Burmese culture. By building a series of weirs, he turned parched, arid regions around Pagan into the main rice granaries of Upper Burma, giving Upper Burma an enduring economic base from which to dominate the Irrawaddy valley and its periphery in the following centuries. He bequeathed a strong administrative system that all later Pagan kings followed until the dynasty's fall in 1287. The success and longevity of Pagan's dominance over the Irrawaddy valley laid the foundation for the ascent of Burmese language and culture, the spread of Burman ethnicity in Upper Burma.

Anawrahta's legacy went far beyond the borders of modern Burma. His embrace of Theravada Buddhism and his success in stopping the advance of Khmer Empire, a Hindu state, provided the Buddhist school, which had been in retreat elsewhere in South and Southeast Asia, a much needed reprieve and a safe shelter. He helped restart Theravada Buddhism in Ceylon, the Buddhist school's original home. The success of Pagan dynasty made Theravada Buddhism's later growth in Lan Na (northern Thailand), Siam (central Thailand), Lan Xang (Laos), and Khmer Empire (Cambodia) in the 13th and 14th centuries possible.

Anawrahta is one of the most famous kings in Burmese history. His life stories (legends) are a staple of Burmese folklore and retold in popular literature and theater.

Principality of Pagan at Anawrahta's accession in 1044 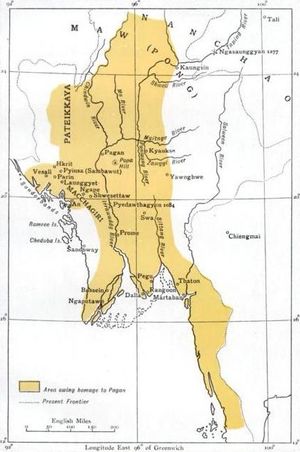 By the mid-1050s, Anawrahta's reforms had turned Pagan into a regional power, and he looked to expand. Over the next ten years, he founded the Pagan Empire, the Irrawaddy valley at the core, surrounded by tributary kingdoms.[6]

His first efforts were in then lightly inhabited Shan Hills in the east and the north. He acquired allegiance of Shan Hills in two waves. In the early to mid-1050s, Anawrahta first visited the nearer Shan Hills in the east, and received tribute. He founded the Bawrithat Pagoda in Nyaungshwe. The second wave came in the late 1050s and early 1060s after his march to Nanzhao Kingdom. After his return from Nanzhao expedition, Shan chiefs along the route presented Anawrahta with tributes. Still, their allegiance was nominal and he had to establish 43 forts along the eastern foothills of which the following 33 still exist as villages.[7]

Anawrahta's next conquest was north Arakan (Rakhine). He marched over the pass from Ngape near Minbu to An in Kyaukphyu, and then laid siege to Pyinsa, then the capital of Arakan. He reportedly tried to bring home the giant Mahamuni Buddha but could not. He did take away the gold and silver vessels of the shrine.[9]

As his kingdom expanded, Anawrahta came into contact with the Nanzhao Kingdom (the erstwhile home of the Burmans) in the northeast, and in the southeast, the Khmer Empire, the main power of mainland Southeast Asia at the time. He assisted fellow Theravada Buddhist Ceylon in its war against Hindu Chola invaders.

Pagan's conquest of Thaton shook the Mon world. Anawrahta also demanded tribute from other neighboring Mon Kingdoms, Haripunjaya and Dvaravati (in present-day northern and central تايلند). Haripunjaya reportedly sent in tribute but Dvaravati's overlord Khmer Empire instead invaded Tenasserim. Anawrahta sent his armies, again led by the four paladins, who repulsed the invaders. The Burmese chronicles referred to the Kingdom of Cambodia as the southeastern limit of the Pagan Empire.[10]

After the Khmer advance was checked, Anawrahta turned his attention toward Nanzhao. Anawrahta led a campaign against the kingdom in the northeast. (According to a mid-17th century source, he began the march on 16 December 1757.)[note 3] He advanced to Dali, the capital of Nanzhao Kingdom, ostensibly to seek a Buddha's tooth relic. As in the case of the request for the scriptures from Thaton, it was really a demand for tribute. The ruler of Nanzhao shut the gates, and would not give up the relic. After a long pause, two kings exchanged presents and conversed amicably. The Nanzhao ruler gave Anawrahta a jade image which had come into contact with the tooth.[11]

In 1069, Vijayabahu I of Ceylon asked Anawrahta for aid against the Chola invaders from Tamil country. Anawrahta sent ships of supplies in aid of Buddhist Ceylon.[11][12] In 1071, Vijayabahu who had defeated the Cholas asked Anawrahta for scriptures and monks. The Chola invasions had left the original home of Theravada Buddhism with so few monks that it was hard to convene a chapter and make valid ordinations. Anawrahta sent the monks and scriptures, and a white elephant as present for Vijayabahu. The Burmese monks ordained or re-ordained the entire clergy of the island. In return, the Ceylonese king gave a replica of the Buddha Tooth of which Ceylon was the proud possessor. The replica was then enshrined in the Lawkananda Pagoda in Pagan.[11][13] 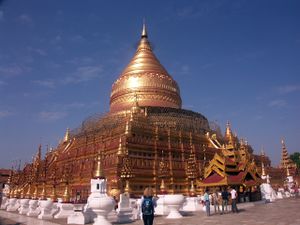 Scholarship believed until recently that Anawrahta commissioned the invention of the Burmese script based on the Mon script, c. 1058, a year after the Thaton conquest.[14] However, recent research finds that the Burmese script had been in use at least since 1035, and if an 18th-century recast inscription is permissible as evidence, since 984 CE.[15]