Following his legal career, Sezer became a candidate for the Presidency jointly supported by many political parties in Parliament. Following the 2000 presidential election, he took an ardent secularist approach on issues such as the headscarf and held the view that secularism in Turkey was under threat. A quarrel between Sezer and the Prime Minister Bülent Ecevit in 2001 led to a financial meltdown, attributed to the weakness of the coalition government as well as the existence of a large amount of debt to the International Monetary Fund.

The landslide victory of the conservative Islamist Justice and Development Party (AKP) in the 2002 general election resulted in strong opposition from President Sezer, who vetoed several laws and referred some to the Constitutional Court. These included laws on banking reform and the lifting of Recep Tayyip Erdoğan's political ban. During receptions at the presidential palace, Sezer refused to allow women wearing the headscarf to attend per the laws on separation of mosque and state at the time, resulting in the wives of Abdullah Gül and Erdoğan, Hayrünnisa Gül and Emine Erdoğan respectively, not attending the events. Erdoğan later publicly stated that he had 'suffered a lot' from Sezer.[1]

During the 2014 presidential election, Sezer openly refused to vote, citing the lack of a secularist candidate as his reason.[2] 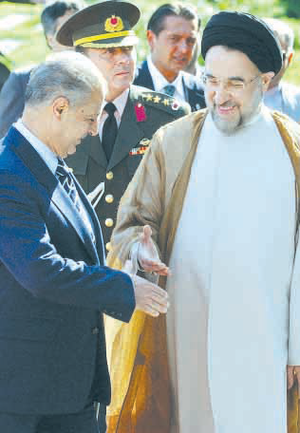 He was elected president in May 2000, becoming Turkey's first head of state to come from a judicial background. He was sworn in on May 16, 2000. His term was to expire on May 16, 2007, but because the Grand National Assembly of Turkey failed to elect a new president, he retained the office pro tempore until August 28, 2007 (the Constitution of Turkey states that a president's term of office is extended until a successor is elected).

On February 21, 2001, during a quarrel in a National Security Council meeting, he threw the constitutional code book at the Prime Minister Bülent Ecevit. According to some circles, this falling-out was the main obvious reason for "Black Wednesday", a big economic crisis. Others claimed that the rapid reforms for the accession negotiations with the European Union and strong ties with the International Monetary Fund caused the "Black Wednesday" crisis.[3]

Sezer was a firm defender of secularism in Turkey, which was a point of contention between him and the ruling AKP party on many issues. On many occasions, he openly stated that the secular regime in Turkey was under threat.[4] He believes that Islam does not require women to wear headscarves. Sezer went so far as to exclude from official receptions at the Presidential Palace legislators' wives who wore headscarves.[5]

During his presidency, he pardoned 260 convicted felons, 202 of whom were captured leftist militants.[6][7][8] This type of pardon can be requested directly by the felon or the legal representative of the felon, but no political or court referral is necessary. Some organizations have used such pardons to criticize Sezer's presidency. On the other hand, Sezer also enacted new harsh laws to punish people who are connected with terrorism.[9]