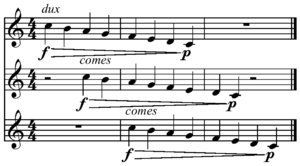 Contrived example of a canon in three voices at the unison, two beats apart. Play (المساعدة·معلومات)

في الموسيقى، الاتباع canon هو تكنيك في التأليف الكونترابنطي يستخدم لحن مع محاكاة موسيقية واحدة أو أكثر للحن الذي يعزف بعد مدة محددة (e.g., quarter rest, one measure, etc.). The initial melody is called the leader (or dux), while the imitative melody, which is played in a different voice, is called the follower (or comes). The follower must imitate the leader, either as an exact replication of its rhythms and intervals or some transformation thereof (see "Types of canon", below). Repeating canons in which all voices are musically identical are called rounds – "Row, Row, Row Your Boat" and "Frère Jacques" being widely known examples. An example of a classical strict canon is the Trio of Haydn's String Quartet in D Minor, Op. 76, No. 2 (White 1976, 66).

Accompanied canon is a canon accompanied by one or more additional independent parts which do not take part in imitating the melody.

The term originates from the Greek kanon, which literally means "ruler" or "a measuring stick." Figuratively, kanon also refers to "a standard," "rule," or "law." Canon refers to the measured or consistent length among the voices starting one after another.[بحاجة لمصدر] Through the 18th century the word used to describe strict imitation was "fuga", and only in the 16th century did the word "canon" begin to be used to describe the musical form created by such a procedure (Mann, Wilson, and Urquhart n.d.).

The earliest known canons are English rounds, a form called rondellus starting in the 14th century (Mann, Wilson, and Urquhart n.d.); the best known is Sumer Is Icumen In (composed around 1250), called a rota ("wheel") in the manuscript source (Sanders 2001a and 2001b). In the 14th century many canons were written in Italy under the name caccia, and occasionally French chansons of that period used canon technique.[بحاجة لمصدر]

During the period of the Franco-Flemish School (1430–1550), canon as a contrapuntal art form received its greatest development, while the Roman School gave it its most complete application. In later periods the canon played a less important role in entertainment,[بحاجة لمصدر] with a few notable exceptions (e.g., Bach's The Musical Offering). Arnold Schoenberg's twelve-tone technique later revived interest in canon.[بحاجة لمصدر]

The most rigid and ingenious forms of canon are not strictly concerned with pattern but also with content. Canons are classified by various traits: the number of voices, the interval at which each successive voice is transposed in relation to the preceding voice, whether voices are inverse, retrograde, or retrograde-inverse; the temporal distance between each voice, whether the intervals of the second voice are exactly those of the original or if they are adjusted to fit the diatonic scale, and the tempo of successive voices. However, canons may use more than one of the above methods.

Although, for clarity, this article uses leader and follower(s) to denote the leading voice in a canon and those that imitate it, musicological literature also uses the traditional Latin terms dux and comes for "leader" and "follower", respectively. The terms "proposta" for the leader and "riposta" for the follower are also common terms.[بحاجة لمصدر]

A simple canon (also known as a round) imitates the leader perfectly at the octave or unison. Well-known canons of this type include the famous children's songs Row, Row, Row Your Boat and Frère Jacques. 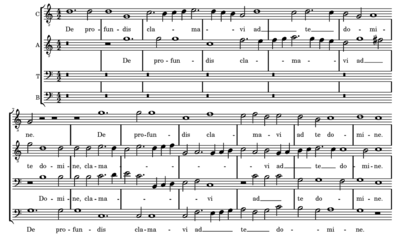 Beginning of psalm motet De profundis by Josquin des Prez, featuring a canon at the fourth between the two upper voices in the first six bars. Play (المساعدة·معلومات)

The follower is by definition a contrapuntal derivation of the leader.

An inversion canon (also called an al rovescio canon) has the follower moving in contrary motion to the leader. Where the leader would go down by a particular interval, the follower goes up by that same interval (Kennedy 1994).

In a retrograde canon, also known as a canon cancrizans (Latin for crab canon, derived from the Latin cancer = crab), the follower accompanies the leader backward (in retrograde). Alternative names for this type are canon per recte et retro or canon per rectus et inversus (Kennedy 1994).

Many such canons were composed during the Renaissance, particularly in the late fifteenth and early sixteenth centuries; Johannes Ockeghem wrote an entire mass (the Missa prolationum) in which each section is a mensuration canon, and all at different speeds and entry intervals. In the 20th century, Conlon Nancarrow composed complex tempo or mensural canons, mostly for the player piano as they are extremely difficult to play. Larry Polansky has an album of mensuration canons, Four-Voice Canons. Arvo Pärt has written several mensuration canons, including Cantus in Memoriam Benjamin Britten, Arbos and Festina Lente. Per_Nørgård's infinity series has a sloth canon structure (Mortensen n.d.). This self similarity of sloth canons makes it "fractal like" and the same idea is explored in Fractal Tune Smithy's Sloth Canons

The most familiar of the canons is the perpetual/infinite canon (in Latin: canon perpetuus) or round. As each voice of the canon arrives at its end it can begin again, in a perpetuum mobile fashion; e.g., "Three Blind Mice". Such a canon is also called a round or, in medieval Latin terminology, a rota. Sumer is icumen in is one example of a piece designated rota.

A Puzzle canon can be any of the above types, but only one voice is notated, and it is up to the performer to find out which rule applies to the canon. Often some kind of riddle is given as a hint. Machaut's rondeau Ma fin est mon commencement et mon commencement est ma fin (My end is my beginning and my beginning is my end) is a crab canon with a third voice which is a musical palindrome. In the Agnus Dei movement of Dufay's mass L'homme armé the rule is noted: Cancer eat plenis et redeat medius (Let the crab proceed full and return half). This means that the cantus firmus must be sung first in full note values, then in halved values and retrograde (since it is a crab).[بحاجة لمصدر]

In a mirror canon (or canon by contrary motion), the subsequent voice imitates the initial voice in inversion. They are not very common, though examples of mirror canons can be found in the works of Bach, Mozart (e.g., the trio from Serenade for Wind Octet in C, K. 388), Webern, and other composers.

A Table canon is a retrograde and inverse canon meant to be placed on a table in between two musicians, who both read the same line of music in opposite directions. As both parts are included in each single line, a second line is not needed. Bach wrote a few table canons (Benjamin 2003, 120).

Olivier Messiaen employed a technique which he called "rhythmic canon", a polyphony of independent strands in which the pitch material differs. An example is found in the piano part of the first of the Trois petites liturgies de la présence divine, where the left hand (doubled by strings and maracas), and the right hand (doubled by vibraphone) play the same rhythmic sequence in a 3:2 ratio, but the right hand adapts a sequence of 13 chords in the sixth mode (B-C-D-E-F-F-G-A-B) onto the 18 duration values, while the left hand twice states nine chords in the third mode (Griffiths 2001).

In his early work, such as Piano Phase (1967) and Clapping Music (1972), Steve Reich used a process he calls phasing which is a "continually adjusting" canon with variable distance between the voices, in which melodic and harmonic elements are not important, but rely simply on the time intervals of imitation (Mann, Wilson, and Urquhart n.d.).