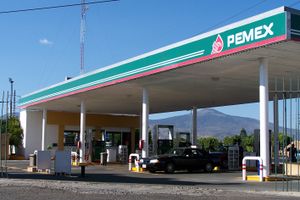 Asphalt and pitch had been worked in Mexico since the time of the Aztecs. Small quantities of oil were first refined into kerosene around 1876 near Tampico. By 1917, commercial quantities of oil were being extracted and refined by subsidiaries of the British Pearson and American Doheny companies, and had attracted the attention of the Mexican government who then claimed all mineral rights for the state as part of its Constitution.

In 1938, President Lázaro Cárdenas (1934–40) sided with oil workers striking against foreign-owned oil companies for an increase in pay and social services. On March 18, 1938, citing Article 27 of the Constitution of 1917, President Cárdenas embarked on the state-expropriation of all resources and facilities, nationalizing the United States and Anglo–Dutch operating companies, creating Pemex. He is famous in saying in his speech addressing the nation,

I ask the entire nation to furnish the necessary moral and material support to face the consequences of a decision which we, of our own free will, would neither have sought nor desired.[6]

He framed expropriation as a necessary national response to the injustice of the operations of foreign companies operating on Mexican soil. Expropriation was not outright confiscation, since the Mexican government promised to compensate companies. However, in retaliation, many foreign governments closed their markets to Mexican oil. In spite of the boycott, Pemex developed into one of the largest oil companies in the world and helped Mexico become the fifth-largest oil exporter in the world.[بحاجة لمصدر]

In an interview on the oil news website in November 2005, a Pemex employee spoke anonymously of the company's inability to grow production, stating that the company and country is at Hubbert's Peak. The person interviewed believed export levels could not be recovered once peak had passed, as the size of current fields that have been discovered or are coming online represent a fraction of the size of the oilfields going into terminal decline. Annual production has dropped each year since 2004.[7] Furthermore, it has been reported the 2005–2006 daily oil production was down by approximately 500,000 برميل لكل يوم (79,000 م3/ي) (a large proportion of the country's 4,500,000 barrels) on the previous year. Pemex averaged 3.71 MMBPD in 2006.[7] Pemex has never produced 4 MMBPD or higher for a yearly average.[8] Pemex has been replaced as Latin America's largest company by Petrobras, according to the latest Latin Business Chronicle ranking of Latin America's Top 500 companies. To help capitalize the company, former President Vicente Fox brought forward the possibility of making shares of Pemex available to Mexican citizens and pension funds, to complement a current project-specific investment setup known as "Proyectos de Inversión Diferida En El Registro del Gasto" (Deferred Investment Projects in the Expenditure Registry);[9] this proposal, along with alleviating Pemex's heavy tax burden and a substantial budget increase, have met opposition in Congress.[10][11] President Felipe Calderón made clear at the beginning of his presidency that he would try his best to open up the sector to private investment. Pemex is Latin America's second-largest company measured by revenues, according to a ranking of the region's 500 largest companies by Latin Business Chronicle, behind Brazilian oil company Petrobras. In June 2009, Pemex has asked for an extra $1.5 billion state aid to finance oil fields investments, reported Bloomberg.

President Calderón called for change in Mexico's oil industry after output at Pemex fell at the fastest rate since 1942. His comments came after Petrobras and London-based BP said they made a "giant" oil find of as much as 3 بليون برميلs (480×10^6 م3) in the Gulf of Mexico southeast of Houston. According to Mexican Energy Minister Georgina Kessel, Mexico may seek to emulate Brazilian Oil rules that strengthened Petroleo Brasileiro SA as it considers regulation changes to revive the oil industry.[12]

In January 2014, Pemex signed a cooperation agreement with the Russian oil company Lukoil focusing on oil production and field exploration as well as exchange of knowledge in the aforementioned areas, including actions for ecological preservation and environmental protection.[13]

In February 2016, Emilio Lozoya Austin stepped down as CEO of Pemex, and was replaced by Dr. José Antonio González Anaya.[14]

On November 27, 2017, Dr. José Antonio González Anaya was appointed to be the Secretary of Finance and Public Credit. Carlos Alberto Treviño Medina was appointed CEO, sequentially. 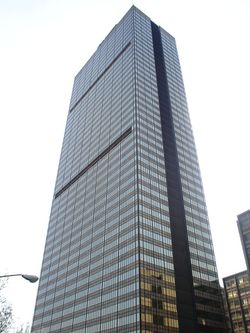