نيكس (Nyx ؛ /nɪks/;[1] باليونانية قديمة: Νῠ́ξ, Nýx, [nýks], 'Night')[2] is the Greek goddess (or personification) of the night. A shadowy figure, Nyx stood at or near the beginning of creation and mothered other personified deities such as Hypnos (Sleep) and Thanatos (Death), with Erebus (Darkness). Her appearances are sparse in surviving mythology, but reveal her as a figure of such exceptional power and beauty that she is feared by Zeus himself. 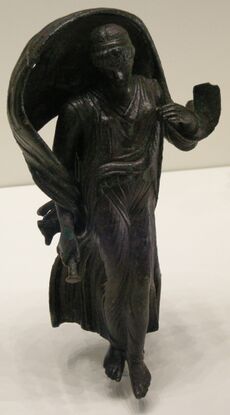 In his description of Tartarus, Hesiod locates there the home of Nyx,[7] and the homes of her children Hypnos and Thanatos.[8] Hesiod says further that Nyx's daughter Hemera (Day) left Tartarus just as Nyx (Night) entered it; continuing cyclicly, when Hemera returned, Nyx left.[9] This mirrors the portrayal of Ratri (night) in the Rigveda, where she works in close cooperation but also tension with her sister Ushas (dawn).

At Iliad 14.249–61, Hypnos, the minor deity of sleep, reminds Hera of an old favor after she asks him to put Zeus to sleep. He had once before put Zeus to sleep at the bidding of Hera, allowing her to cause Heracles (who was returning by sea from Laomedon's Troy) great misfortune. Zeus was furious and would have smote Hypnos into the sea if he had not fled to Nyx, his mother, in fear. Homer goes on to say that Zeus, fearing to anger Nyx, held his fury at bay and in this way Hypnos escaped the wrath of Zeus by appealing to his powerful mother. He disturbed Zeus only a few times after that, always fearing Zeus and running back to his mother, Nyx, who would have confronted Zeus with a maternal fury.

Nyx took on an even more important role in several fragmentary poems attributed to Orpheus.[بحاجة لمصدر] In them, Nyx, rather than Chaos, is the first principle from which all creation emerges.[بحاجة لمصدر] Nyx occupies a cave or adyton, in which she gives oracles. Cronus – who is chained within, asleep and drunk on honey – dreams and prophecizes. Outside the cave, Adrasteia clashes cymbals and beats upon her tympanon, moving the entire universe in an ecstatic dance to the rhythm of Nyx's chanting. Phanes – the strange, monstrous, hermaphrodite Orphic demiurge – was the child[بحاجة لمصدر] or father of Nyx. Nyx is also the first principle in the opening chorus of Aristophanes' The Birds, which may be Orphic in inspiration. Here she is also the mother of Eros.[10]

The theme of Nyx's cave or mansion, beyond the ocean (as in Hesiod) or somewhere at the edge of the cosmos (as in later Orphism) may be echoed in the philosophical poem of Parmenides. The classical scholar Walter Burkert has speculated that the house of the goddess to which the philosopher is transported is the palace of Nyx; this hypothesis, however, must remain tentative.

In some accounts, the goddess of witchcraft, Hecate was also called the daughter of Night.[11] 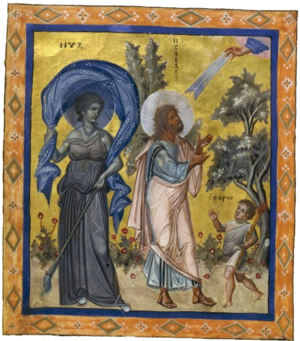 Nyx, as represented in the 10th-century Paris Psalter at the side of the Prophet Isaiah

There was no known temple dedicated to Nyx, but statues are known to have been made of her and a few cult practices of her are mentioned. According to Pausanias, she had an oracle on the acropolis at Megara.[12] Pausanias wrote :

When you have ascended the citadel [of Megara], which even at the present day is called Karia (Caria) from Kar (Car), son of Phoroneus, you see a temple of Dionysos Nyktelios (Nyctelius, Nocturnal), a sanctuary built to Aphrodite Epistrophia (She who turns men to love), an oracle called that of Nyx (Night) and a temple of Zeus Konios (Cronius, Dusty) without a roof.[13]

More often, Nyx was worshipped in the background of other cults. Thus there was a statue called "Night" in the Temple of Artemis at Ephesus.[14] The Spartans had a cult of Sleep and Death, conceived of as twins.[15] Cult titles composed of compounds of nyx- are attested for several deities, most notably Dionysus Nyktelios "nocturnal"[16] and Aphrodite Philopannyx "who loves the whole night".[17]

Roman authors mentioned cult practices and wrote hymns in her honor. Ovid wrote: "May 9 Lemuria Nefastus. You ancient rite will be performed, Nox Lemuria; here will be offerings to the mute dead",[18] and she is also mentioned by Statius:

O Nox . . . Ever shall this house throughout the circling periods of the year hold thee high in honour and in worship; black bulls of chosen beauty shall pay thee sacrifice [black animals were sacrificed to the chthonic gods], O goddess! And Vulcanus' [Hephaistos'] fire shall eat the lustral entrails, where-o'er the new milk streams.[19]

In 1997, the International Astronomical Union approved the name Nyx for a mons (mountain/peak) feature on the planet Venus. Nyx Mons is located at latitude 30° North and longitude 48.5° East on the Venusian surface. Its diameter is 875 km.

On June 21, 2006, the International Astronomical Union renamed one of Pluto's recently discovered moons (S/2005 P 2) Nix, in honor of Nyx. The name was spelled with an "i" instead of a "y", to avoid conflict with the asteroid 3908 Nyx.