The first Europeans to visit Western Australia belonged to the Dutch Dirk Hartog expedition, who visited the Western Australian coast in 1616. The first permanent European settlement of Western Australia occurred following the landing by Major Edmund Lockyer on 26 ديسمبر 1826 of an expedition on behalf of the New South Wales colonial government,[5] although Wiebbe Hayes Stone Fort—the oldest surviving European building in Australia—was built 197 years prior in 1629 on West Wallabi Island in Western Australia by survivors of the  Batavia shipwreck and massacre. Lockyer established a convict-supported military garrison at King George III Sound, at present-day Albany, and on 21 يناير 1827[5] formally took possession for the British Crown of the western part of the continent that was not already claimed by the British Crown. This was followed by the establishment of the Swan River Colony in 1829, including the site of the present-day capital, Perth.

York was the first inland settlement in Western Australia. Situated 97 kiloمترs (60 ميلs) east of Perth, it was settled on 16 سبتمبر 1831.[6]

Western Australia achieved responsible government in 1890 and federated with the other British colonies in Australia in 1901. Today, its economy mainly relies on mining, oil and gas, services and construction. The state produces 46 per cent of Australia's exports.[7] Western Australia is the largest iron ore producer in the world.[8] 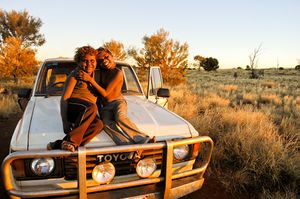 Ngaanyatjarra children, from the desert regions of Western Australia

The first inhabitants of Australia arrived from the north about 40,000 to 60,000 years ago. Over thousands of years they eventually spread across the whole landmass. These Indigenous Australians were long established throughout Western Australia by the time European explorers began to arrive in the early 17th century. 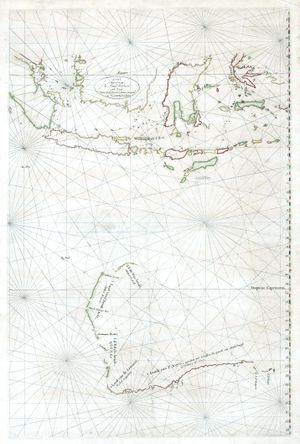 Map first drawn in 1618 by Hessel Gerritsz showing the charted coast of Australia. Chartings after 1618, for example by François Thijssen in 1627, were added to the engraved plate between 1628 and 1632.[9]

Western Australia is bounded to the east by longitude 129°E, the meridian 129 degrees east of Greenwich, which defines the border with South Australia and the Northern Territory, and bounded by the Indian Ocean to the west and north. The International Hydrographic Organization (IHO) designates the body of water south of the continent as part of the Indian Ocean; in Australia it is officially gazetted as the Southern Ocean.[b][10][11]

The bulk of Western Australia consists of the extremely old Yilgarn craton and Pilbara craton which merged with the Deccan Plateau of India, Madagascar and the Karoo and Zimbabwe cratons of Southern Africa, in the Archean Eon to form Ur, one of the oldest supercontinents on Earth (3 – 3.2  billion years ago). In May 2017, evidence of the earliest known life on land may have been found in 3.48-billion-year-old geyserite and other related mineral deposits (often found around hot springs and geysers) uncovered in the Pilbara craton.[15][16]

Because the only mountain-building since then has been of the Stirling Range with the rifting from Antarctica, the land is extremely eroded and ancient, with no part of the state above 1,245 metres (4,085 ft) AHD (at Mount Meharry in the Hamersley Range of the Pilbara region). Most of the state is a low plateau with an average elevation of about 400 metres (1,200 ft), very low relief, and no surface runoff. This descends relatively sharply to the coastal plains, in some cases forming a sharp escarpment (as with the Darling Range/Darling Scarp near Perth). 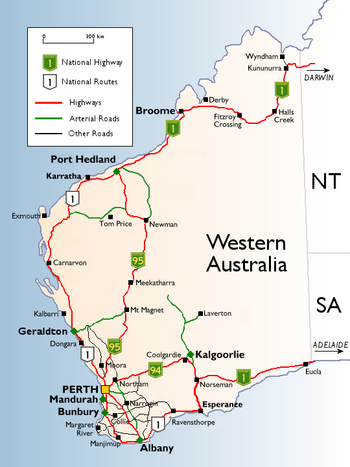 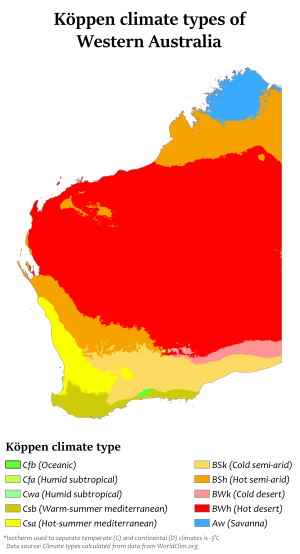 Western Australia's capital and largest city, Perth, from Kings Park. Its metropolitan area is home to 75% of the state's population. 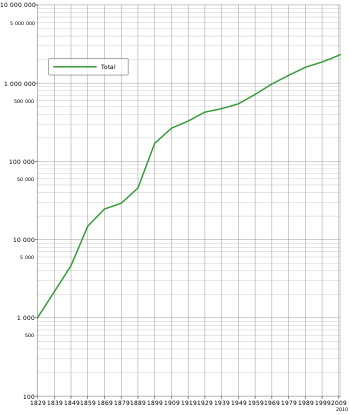 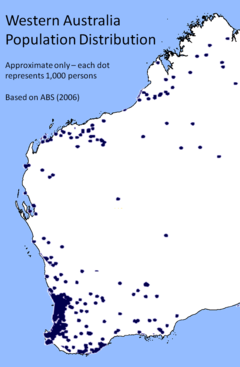 Distribution of the Western Australian population

In 1981, a sister state agreement was drawn up between Western Australia and Hyōgo Prefecture in Japan that was aimed at improving cultural ties between the two states.[21][22] To commemorate the 10th anniversary of this agreement, the Hyōgo Prefectural Government Cultural Centre was established in Perth in 1992.[23] Prior to that, the Western Australian government opened an office in Kobe, the largest city in Hyōgo, to facilitate maintenance of the relationship in 1989.[22][24]

Following the Great Hanshin earthquake that devastated southern Hyōgo in January 1995, Western Australian groups and businesses raised funds and provided materials, whilst individuals travelled to Hyōgo to help with emergency relief and the subsequent reconstruction process.[25][26][27] The two governments signed a memorandum of understanding on the 20th anniversary in 2001 that aimed to improve the economic relationship between the two states.[22] 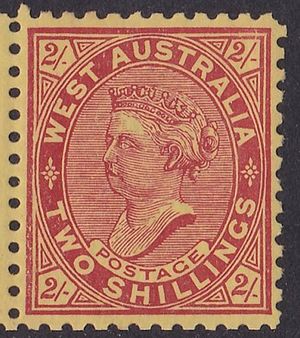 a  "West Australia" and its related demonym "West Australian" are occasionally used, including in the names of the main daily newspaper, The West Australian, and the state-based West Australian Football League, but are rarely used in an official sense. The terms "Westralia" and "Westralian" were regularly used in the 19th and 20th century.[29][30] The terms are still found in the names of certain companies and buildings, e.g. Westralia House in Perth and Westralia Airports Corporation, which operates Perth Airport, as well as in the names of several ships.[31][32]
b  In Australia, the body of water south of the continent is officially gazetted as the Southern Ocean, whereas the International Hydrographic Organization (IHO) designates it as part of the Indian Ocean.[33][34]