Alès lies 40 kiloمترs (131,234 قدم) north-northwest of Nîmes, on the left bank of the Gardon River, which half surrounds it. It is located at the foot of the Cévennes, near the Cévennes National Park.

Alès may be the modern successor of Arisitum, where, in about 570, Sigebert, King of Austrasia, created a bishopric. In his campaign against the Visigoths, the Merovingian king Theudebert I (533–548) conquered part of the territory of the Diocese of Nîmes. His later successor Sigebert set up the new diocese, comprising fifteen parishes in the area controlled by the Franks, which included a number of towns to the north of the Cevenne: Alès, Le Vigan, Arre, Arrigas, Meyrueis, Saint-Jean-du-Gard, Anduze, and Vissec. The diocese disappeared in the 8th century with the conquest of the whole of Septimania by the Franks.[2][3] No longer a residential bishopric, Arisitum is today listed by the Catholic Church as a titular see.[4]

After the Edict of Nantes, Alès was one of the places de sûreté given to the Huguenots. Louis XIII took back the town in 1629, and the Peace of Alès, signed on 29 June of that year, suppressed the political privileges of the Protestants, while continuing to guarantee toleration.[5]

At the request of Louis XIV, a see was again created at Alais by Pope Innocent XII, in 1694. The future Cardinal de Bausset, Bossuet's biographer, was Bishop of Alais from 1784 to 1790.[5] It was suppressed after the French Revolution, and its territory was divided between the diocese of Avignon and the diocese of Mende.

Alès is the center of a mining district and hosts the École des Mines d'Alès.

Historically, according to the Encyclopædia Britannica Eleventh Edition (1911):

"The town is one of the most important markets for raw silk and cocoons in the south of France, and the Gardon supplies power to numerous silk-mills. It is also the centre of a mineral field, which yields large quantities of coal, iron, zinc and lead; its blast-furnaces, foundries, glass-works and engineering works afford employment to many workmen."[5] 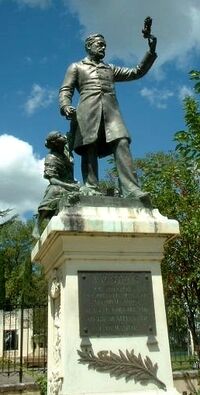 Pasteur did his research on the silkworm disease (pébrine and flacherie) at Alès, and the town dedicated a bust to his memory. There is also a statue of the chemist J.B. Dumas.[5] Alphonse Daudet wrote his semi-autobiographical novel "Le Petit Chose" while teaching at the Collège of Alès.[6]

The town has one association football team called Olympique Alès who currently play in the Championnat National.

Historically, according to the Encyclopædia Britannica Eleventh Edition:

"The streets are wide and its promenades and fine plane-trees make the town attractive; but the public buildings, the chief of which are the Saint-Jean-Baptiste cathedral, a heavy building of the 18th century, and the citadel, which serves as barracks and prison, are of small interest."[5]

Alès was the birthplace of: