Patristics or patrology is the study of the early Christian writers who are designated Church Fathers. The names derive from the combined forms of Latin pater and Greek patḗr (father). The period is generally considered to run from the end of New Testament times or end of the Apostolic Age ( AD 100ح.  AD 100) to either AD 451 (the date of the Council of Chalcedon)[1] or to the Second Council of Nicaea in 787. 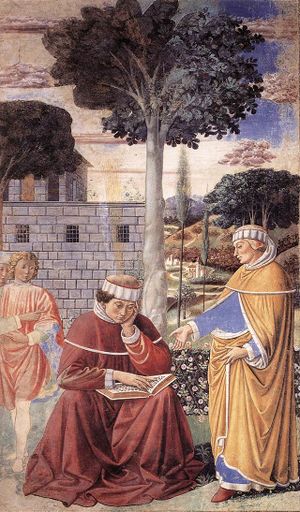 Among those whose writings form the basis for patristics, (i.e., prominent early Church Fathers), are:

The major locations of the early Church fathers were Rome, Constantinople, Alexandria, Antioch, and the area of western north Africa around Carthage. Milan and Jerusalem were also sites.[2]

Some scholars, chiefly in Germany, distinguish patrologia from patristica. Josef Fessler, for instance, defines patrologia as the science which provides all that is necessary for the using of the works of the Fathers, dealing, therefore, with their authority, the criteria for judging their genuineness, the difficulties to be met within them, and the rules for their use. But Fessler's own Institutiones Patrologiae has a larger range, as have similar works entitled Patrologies, for example, that of Otto Bardenhewer (tr. Shahan, Freiburg, 1908). Catholic writer Karl Keating argues that patrology is the study of the Early Fathers and their contemporaries as people, and the authenticity of the works attributed to them. Patristics, on the other hand, is the study of their thought.[3]

On the other hand, Fessler describes patristica as that theological science by which all that concerns faith, morals, or discipline in the writings of the Fathers is collected and sorted. The lives and works of the Fathers are also described by a non-specialized science: literary history. These distinctions are not much observed, nor do they seem very necessary; they are nothing else than aspects of patristic study as it forms part of fundamental theology, of positive theology, and of literary history.

English translations of patristic texts are readily available in a variety of collections. For example: