St. Moritz (also بالألمانية: Sankt Moritz, بالرومانش: San Murezzan (المساعدة·معلومات), بالايطالية: San Maurizio,[أ] بالفرنسية: Saint-Maurice) is a high Alpine resort town in the Engadine in Switzerland, at an elevation of about 1,800 مترs (5,910 قدم) above sea level. It is Upper Engadine's major town and a municipality in the district of Maloja in the Swiss canton of Graubünden.

St. Moritz lies on the southern slopes of the Albula Alps below the Piz Nair (3,056 م or 10,026 قدم) overlooking the flat and wide glaciated valley of the Upper Engadine and eponymous lake: Lake St. Moritz. It hosted the Winter Olympics in 1928 and 1948.

Votive offerings, swords, and needles from the Bronze Age found at the base of the springs in St. Moritz indicate that the Celts had already discovered them. St. Moritz is first mentioned around 1137–39 as ad sanctum Mauricium.[3] The village was named after Saint Maurice, an early Christian saint from southern Egypt said to have been martyred in 3rd century Roman Switzerland while serving as leader of the Theban Legion.

Pilgrims traveled to Saint Mauritius, often to the church of the springs, where they drank from the blessed, bubbling waters of the Mauritius springs in the hopes of being healed. In 1519, the Medici pope, Leo X, promised full absolution to anyone making a pilgrimage to the church of the springs. In the 16th century, the first scientific treatises about the St. Moritz mineral springs were written. In 1535, Paracelsus, the great practitioner of natural remedies, spent some time in St. Moritz. 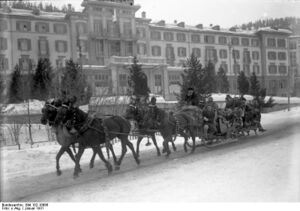 Although it received some visitors during the summer, the origins of the winter resort only date back منذ 158 سنة to September 1864, when St. Moritz hotel pioneer Caspar Badrutt made a wager with four British summer guests: they should return in winter and, if the village was not to their liking, then he would reimburse their travel costs. If they were to find St. Moritz attractive in winter, then he would invite them to stay as his guests for as long as they wished.[4] This marked not only the start of winter tourism in St. Moritz but also the start of winter tourism in the whole of the Alps. The first tourist office in Switzerland was established the same year in the village. St. Moritz developed rapidly in the late nineteenth century; the first electric light in Switzerland was installed in 1878 at the Kulm Hotel, and the first curling tournament on the continent was held in 1880.[4] The first European Ice-Skating Championships were held at St. Moritz in 1882 and first golf tournament in the Alps held in 1889. The first bob run and bob race was held in 1890. By 1896, St. Moritz became the first village in the Alps to install electric trams and opened the Palace Hotel.[4] A horse race was held on snow in 1906, and on the frozen lake the following year. The first ski school in Switzerland was established in St. Moritz in 1929.[4]

St. Moritz hosted the 1928 Winter Olympics—the stadium still stands today—and again in 1948. It has hosted over 20 FIBT World Championships, four FIS Alpine World Ski Championships (1934/1974/2003/2017) and over 40 Engadin Skimarathons since 1969. It has also hosted many other events since, including some unlikely ones on the frozen lake in the 1970s and 1980s such as a golf tournament, (1979), a snow polo tournament (every year in January starting in 1985) and Cricket on Ice (1989).[4] St. Moritz has also been the venue for many Sailing and Windsurfing World Championships.

Since the early 1980s St. Moritz is also promoted and known as Top of the World. The expression was registered as a trademark by the tourist office in 1987. 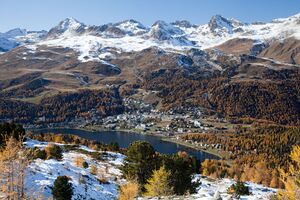 St. Moritz from above 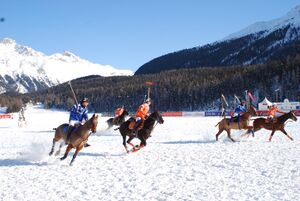 St. Moritz has been a resort for winter sport vacations since the 19th century. Students from Oxford and Cambridge went there to play each other; the predecessor of the recurring Ice Hockey Varsity Match was a bandy match played in St. Moritz in 1885. St. Moritz was the host city for the Winter Olympic Games in 1928 and 1948, one of three cities to host twice, along with Innsbruck, Austria and Lake Placid in the United States. It also hosted the FIS Alpine World Ski Championships in 1934, 1974, 2003, and 2017.

Additionally, St. Moritz has hosted the FIBT World Championships (bobsleigh and skeleton racing) a record 21 times. Since 1985, it has hosted Snow Polo St. Moritz, a tournament featuring many of the world's finest team and played on a specially-marked field on the frozen lake.[7]

St. Moritz is extremely popular in the summer months as an altitude training base for distance athletes, particularly cyclists, runners, and race walkers. Its popularity extends to the altitude, weather, world class athletics track, and availability of paths and trails in the area.

In 1904, the oldest and world's last remaining natural bob run was opened. The 1.72 kم (5,643 قدم 0.54 بوصة) ice channel – also known as the world's biggest "ice sculpture" – is built every winter from the ground up with only snow and water. The bob run hosted numerous world championships and was used in both Olympic Winter Games. In the early 1930s, some members of the bob club started taking guests along for taxi rides; today they run with slightly modified racing bobs. 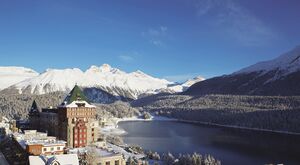 Popular pastimes include skiing, snowboarding, and hiking, and nearby there is also the world-famous Cresta Run toboggan course.

The year-round population is 5,600, with some 3,000 seasonal employees supporting hotels and rental units with a total of 13,000 beds. The Kulm Hotel St. Moritz is a large luxury hotel in St. Moritz. 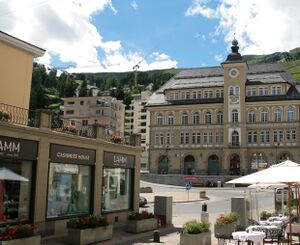 St. Moritz has a subarctic climate (Koppen: Dfc) due to its particularly high elevation near to the tree line. It has cool summers coupled with cold nights and very cold, snowy winters with highs around freezing and 254 cم (8.33 قدم) of average annual snowfall. The average temperature, about 2°C (measured in the nearby town of Samedan), is extremely low compared to that of the Swiss Plateau. It is also significantly lower to that of La Brévine, traditionally considered the coldest inhabited place in Switzerland.

In St. Moritz about 65.8% of the population (between age 25-64) have completed either non-mandatory upper secondary education or additional higher education (either university or a Fachhochschule).[14]

St. Moritz is a regional economic centre and a tourist community.[18] اعتبارا من المعلمة المطلوبة غير صحيحة 1=الشهر! 2014[تحديث][[تصنيف:مقالات فيها عبارات متقادمة منذ المعلمة المطلوبة غير صحيحة 1=الشهر! 2014]], there were a total of 7,590 people employed in the municipality. Of these, a total of 24 people worked in 7 businesses in the primary economic sector. The secondary sector employed 1,039 workers in 74 separate businesses. A minority (17.0%) of the secondary sector employees worked in very small businesses. There were 22 small businesses with a total of 533 employees and 3 mid sized businesses with a total of 329 employees. Finally, the tertiary sector provided 6,527 jobs in 768 businesses. In 2014 a total of 3,820 employees worked in 752 small companies (less than 50 employees). There were 14 mid sized businesses with 1,928 employees and 2 large businesses which employed 779 people (for an average size of 389.5).[19] The Badrutt's Palace Hotel (Five Star) has a staff of 520 persons and is the biggest employer in St.Moritz.

In the second quarter of 2016 an average of 1,062 workers commuted from outside Switzerland to work in the municipality, representing a minority of the employees.[20] 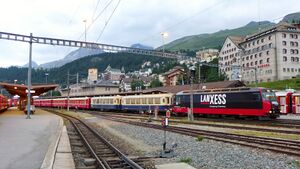 St. Moritz is a regional hub for trains and buses

St. Moritz is the highest town in the country with a railway station. St. Moritz railway station is situated in the centre of the town, near the lakeshore and at the bottom of Via Serlas. It is operated by the Rhaetian Railway, and is the terminus that railway's Albula and Bernina lines. The Glacier Express and Bernina Express trains stop at St. Moritz.

Near the railway station is an important Swiss PostBus stop. 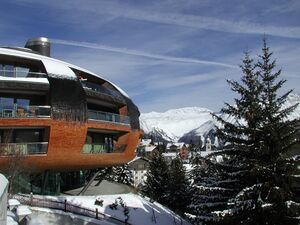