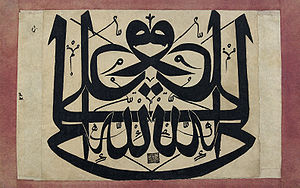 Eighteenth century mirror writing in Ottoman calligraphy. Depicts the phrase 'Ali is the vicegerent of God' in both directions.

Islamic calligraphy, equally known as Arabic calligraphy, is the art of artistic handwriting, and by extension, of bookmaking.[1] This art has most often employed the Arabic script, throughout many languages. Calligraphy is especially revered among Islamic arts since it was the primary means for the preservation of the Qur'an. The work of calligraphers was collected and appreciated. Consideration of figurative art as idolatrous led to calligraphy and abstract figures becoming the main forms of artistic expression in Islamic cultures.[2]

Arabic, Persian and Ottoman Turkish calligraphy is associated with geometric Islamic art (the Arabesque) on the walls and ceilings of mosques as well as on the page. Contemporary artists in the Islamic world draw on the heritage of calligraphy to use calligraphic inscriptions or abstractions in their work.

Calligraphy has arguably become the most venerated form of Islamic art because it provides a link between the languages of the Muslims with the religion of Islam. The holy book of Islam, the Qur'an, has played an important role in the development and evolution of the Arabic language, and by extension, calligraphy in the Arabic alphabet. Proverbs and complete passages from the Qur'an are still active sources for Islamic calligraphy. The Arabic alphabet consists of 28 letters and 18 different forms of writing.

The Diwani script is a cursive style of Arabic calligraphy developed during the reign of the early Ottoman Turks (16th and early 17th centuries). It was invented by Housam Roumi and reached its height of popularity under Süleyman I the Magnificent (1520-66). As decorative as it was communicative, Diwani was distinguished by the complexity of the line within the letter and the close juxtaposition of the letters within the word. A variation of the Diwani, the Diwani Al Jali, is characterized by its abundance of diacritical and ornamental marks.

Finally, the most common script for everyday use is Ruq'ah (also known as Riq'a). Simple and easy to write, its movements are small, without much amplitude. It is the one most commonly seen. It is considered a step up from Naskh script, which children are taught first. In later grades they are introduced to Ruq'ah.

In China, a calligraphic form called Sini has been developed. This form has evident influences from Chinese calligraphy, using a horsehair brush as opposed to the standard reed pen. A famous modern calligrapher in this tradition is Hajji Noor Deen Mi Guangjiang.[3]

Calligraphy, the most Islamic of arts in the Muslim world, has also its figurative sides. By interweaving written words, made from an "Allah", a "Muhammad", a "Bismillah", etc., or using micrography,[4] calligraphers produced anthropomorphic figures ('Ali, the Ideal Human of mystics, a praying man,[5] a face), zoomorphisms (symbolic creatures, most from the Shi'a iconography, like the lion (Duldul, horse of 'Ali,[6] horse ('Ali's Duldul),[7] fish,[4] stork[8] or other bird (the qur'anic Hudhud)[9][10]) and inanimate representations (a sword (Dhu al-Fiqar), a mosque, a ship (made from the letter waw, a symbol of mystical union, literally meaning "and," in Arabic)). Calligrams are related to Muslim mysticism and popular with many leading calligraphers in تركيا, Persia and الهند from the 17th century onward.

In the teachings of calligraphy, figurative imagery is used to help visualize the shape of letters to trace, for example, the letter ha' looks in nasta'liq similar to two eyes, as its Persian name implies: "ha' two eyes" he' do tcheshm). In literature and poetry seeing in letters a reflection of the natural world goes back to the Abbasid times.

One of the contemporary masters of the calligram genre is Hassan Massoudy.

Good commercial examples are the logos of Al Jazeera, an international news station based at Qatar, and the Edinburgh Middle East Report, a Scottish academic journal on the Middle East.

The traditional instrument of the Arabic calligrapher is the qalam, a pen made of dried reed or bamboo; the ink is often in color, and chosen such that its intensity can vary greatly, so that the greater strokes of the compositions can be very dynamic in their effect.

A variety of media were employed for presenting calligraphy. Before the advent of paper, papyrus and parchment were used for writing. The advent of paper revolutionized calligraphy. While monasteries in Europe treasured a few dozen volumes, libraries in the Muslim world regularly contained hundreds and even thousands of volumes of books.[1]

Another medium for calligraphy were coins. Beginning in 692, the Islamic caliphate reformed the coinage of the Near East by replacing visual depiction by words. This was especially true for dinars, or gold coins of high value. Generally the coins were inscribed with quotes from the Qur'an.

By the tenth century, the Persians, who had converted to Islam, began weaving inscriptions on to elaborately patterned silks. So precious were calligraphic inscribed textile, that Crusaders brought them to Europe as prized possessions. A notable example is the Shroud of St. Josse, used to wrap the bones of St. Josse in the abbey of St. Josse-sur-Mer near Caen in northwestern France.[11]