Year 1425 (MCDXXV) was a common year starting on Monday (link will display the full calendar) of the Julian calendar.

Xuande becomes the fifth emperor of China of the Ming Dynasty after the surprise death of his father Hongxi . First, he breaks with his father's plan to relocate the capital to Nanjing , and instead brings the rest of the administration to Beijing . However, as soon as he takes office, the 26-year-old emperor faces a much more serious problem, the rebellion of his uncle Zhu Gaoshu, the prince of Han. On 2 September, he declares war on the Kaiserhof, lifts an army and begins to deploy his own imperial officials.

After being told by senior secretary Yang Jung that both the administration and the army are closed behind him, on 9 September , Emperor Xuande himself takes command of the army and joins forces with veteran General Xu Lu against his uncle. On the 22nd of September20,000 troops storm the city of Le'an and capture the rebellious prince. The uprising is quickly quelled, and Zhu Gaoshu and his entourage are brought to Beijing and executed. More than 600 unfaithful military and civilian officials share this fate, with another 2,200 officials being banished to the borders. Investigations reveal that two other uncle of the emperor are involved in the plot. Xuande, however, spared her, but de facto disempowered all Ming princes and finally condemned them to complete dependence on the imperial Ming court.

Pope Martin V. founds the foundation bull Sapientiae immarcescibilis on 9 December , the University of Leuven as generale studies and the first university in Brabantine-Dutch territory and gives it "the same rights, privileges and immunities as the universities of Cologne, Vienna and Own Leipzig " . The bull contains the approval for the establishment of four faculties : an arts faculty, a faculty of civil law, one for canon law and one medical faculty. 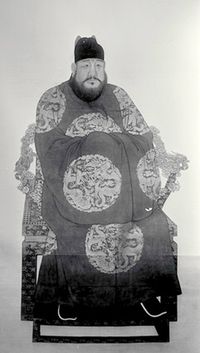