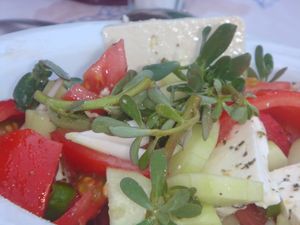 It has an extensive distribution, assumed to be mostly anthropogenic,[2] throughout the Old World extending from North Africa through the Middle East and the Indian Subcontinent to Malesia and Australasia. The species status in the New World is uncertain: in general, it is considered an exotic weed, however, there is evidence that the species was in Crawford Lake deposits (Ontario) in 1430-89 AD, suggesting that it reached North America in the pre-Columbian era.[3] It is naturalised elsewhere, and in some regions is considered an introduced weed. It is also found in Utah.[4] 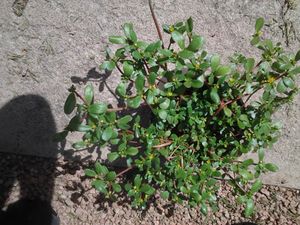 It has smooth, reddish, mostly prostrate stems and alternate leaves clustered at stem joints and ends. The yellow flowers have five regular parts and are up to 6 milliمترs (0.020 قدم) wide. Depending upon rainfall, the flowers appear at any time during the year. The flowers open singly at the center of the leaf cluster for only a few hours on sunny mornings. Seeds are formed in a tiny pod, which opens when the seeds are mature. Purslane has a taproot with fibrous secondary roots and is able to tolerate poor compacted soils and drought.

Widely used in East Mediterranean countries, archaeobotanical finds are common at many prehistoric sites. In historic contexts, seeds have been retrieved from a protogeometric layer in Kastanas, as well as from the Samian Heraion dating to seventh century BC. In the fourth century BC, Theophrastus names purslane, andrákhne (ἀνδράχνη), as one of the several summer pot herbs that must be sown in April (H.P 7.12).[5] As Portulaca it figures in the long list of comestibles enjoyed by the Milanese given by Bonvesin de la Riva in his "Marvels of Milan" (1288).[6]

In antiquity, its healing properties were thought so reliable that Pliny the Elder advised wearing the plant as an amulet to expel all evil (Natural History 20.120).[5]

A common plant in parts of India, purslane is known as sanhti, punarva, paruppu keerai, or kulfa.

Although purslane is considered a weed in the United States, it may be eaten as a leaf vegetable.[7] William Cobbett noted that it was "eaten by Frenchmen and pigs when they can get nothing else. Both use it in salad, that is to say, raw".[8] It has a slightly sour and salty taste and is eaten throughout much of Europe, the Middle East, Asia, and Mexico.[1][9] The stems, leaves and flower buds are all edible. Purslane may be used fresh as a salad, stir-fried, or cooked as spinach is, and because of its mucilaginous quality it also is suitable for soups and stews. The sour taste is due to oxalic and malic acid, the latter of which is produced through the crassulacean acid metabolism (CAM) pathway that is seen in many xerophytes (plants living in dry conditions), and is maximal when the plant is harvested in the early morning.[10]

Australian Aborigines use the seeds of purslane to make seedcakes. Greeks, who call it andrakla (αντράκλα) or glystrida (γλυστρίδα), use the leaves and the stems with feta cheese, tomato, onion, garlic, oregano, and olive oil. They add it in salads, boil it, or add it to casseroled chicken. In Turkey, besides being used in salads and in baked pastries, it is cooked as a vegetable similar to spinach. Called Bakleh tn Lebanon, is eaten raw in a famous salad called fattoush, and cooked as a garniture in fatayeh (triangular salted pastries). In Albania, known as burdullak, it also is used as a vegetable similar to spinach, mostly simmered and served in olive oil dressing, or mixed with other ingredients as a filling for dough layers of byrek. In the south of Portugal (Alentejo), baldroegas are used as a soup ingredient. In Pakistan, it is known as qulfa and is cooked as in stews along with lentils, similarly to spinach, or in a mixed green stew. 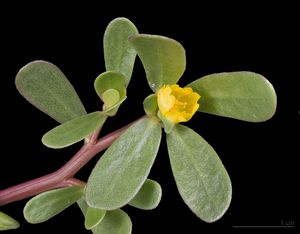 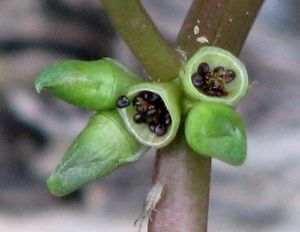 Use is contraindicated during pregnancy and for those with cold and weak digestion.[12] Purslane is a clinically effective treatment for oral lichen planus.[13][بحاجة لمصدر غير رئيسي]

As a companion plant, purslane provides ground cover to create a humid microclimate for nearby plants, stabilising ground moisture. Its deep roots bring up moisture and nutrients that those plants can use, and some, including corn, will follow purslane roots down through harder soil that they cannot penetrate on their own (ecological facilitation). It is known as a beneficial weed in places that do not already grow it as a crop in its own right.

Portulaca oleracea efficiently removes bisphenol A, an endocrine-disrupting chemical, from a hydroponic solution.[14] 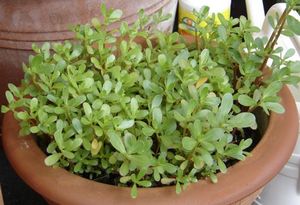 Although often identified as a "weed", purslane is a vegetable rich in omega-3 fatty acids and antioxidants, a cultivar, sativa, is shown here being grown in a ceramic pot

Also present are two types of betalain alkaloid pigments, the reddish betacyanins (visible in the coloration of the stems) and the yellow betaxanthins (noticeable in the flowers and in the slight yellowish cast of the leaves). Both of these pigment types are potent antioxidants and have been found to have antimutagenic properties in laboratory studies.[17]

A half-cup of raw purslane leaves contains as much as 910 mg of oxalate, a compound implicated in the removal of kidney stones. Cooking purslane reduces overall soluble oxalate content by 27%.[18]

When stressed by low availability of water, purslane, which has evolved in hot and dry environments, switches to photosynthesis using Crassulacean acid metabolism (the CAM pathway): At night its leaves trap carbon dioxide, which is converted into malic acid (the souring principle of apples), and, in the day, the malic acid is converted into glucose. When harvested in the early morning, the leaves have ten times the malic acid content as when harvested in the late afternoon, and thus have a significantly more tangy taste.