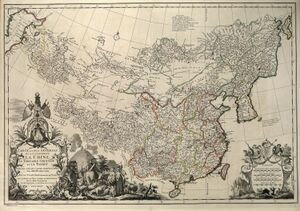 D'Anville's map of China and Chinese Tartary, created in 1734. 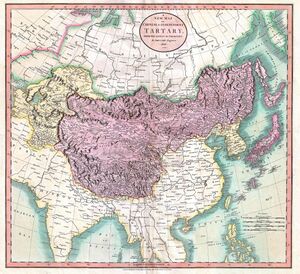 Chinese Tartary (see also Tartary) is an archaic geographical term used especially during the time of the Qing dynasty. The term "Tartar" was used by Europeans to refer to ethnicities living around China's north, northeast, and west, including the Mongols, Man, Tibetans, Central Asians, and even Japanese (as indicated in violet on the map below).

Early European writers used the term "Tartar" indiscriminately for all the peoples of Northern Eurasia and referred to their lands as "Tartary". By the seventeenth century, however, largely under the influence of Catholic missionary writings, the word "Tartar" came to refer to the Manchus, and the land they ruled as "Tartary."[1] The term "Chinese Tartary" was used as early as 1734 on a map created by the French geographer and cartographer Jean Baptiste Bourguignon d'Anville (1697–1782), who published the map in the Nouvel atlas de la Chine, de la Tartarie Chinoise et du Thibet (New atlas of China, Chinese Tartary, and Tibet) in 1738.

D'Anville's map was based on work ordered by the Emperor of China and conducted by the Chinese under the supervision of Jesuits.[2] Also published in 1738 was A description of the empire of China and Chinese-Tartary together with the kingdoms of Korea, and Tibet by Jean-Baptiste Du Halde.[3] In 1741, he went on to write The General History of China Containing a Geographical, Historical, Chronological, Political and Physical Description of the Empire of China, Chinese-Tartary, Corea and Thibet.[4]

The areas described by this work as falling within Chinese Tartary included:

In 1832, the geographical boundaries of Chinese Tartary were defined in A Geographical Dictionary Or Universal Gazetteer.[5]

By 1867, the area of Chinese Tartary was described as the three vast areas covering Manchuria, Mongolia, and Ili (Xinjiang).[6]