American Media, Inc. (A.M.I.), is an American publisher of magazines, supermarket tabloids, and books based in New York City. On December 12, 2018, the U.S. Attorney's Office reported that A.M.I. admitted to paying $150,000 to Karen McDougal in concert with a candidate's presidential campaign for the sole purpose of preventing damaging allegations prior to the 2016 election for President of the United States.[2][3]

In late 2015, AMI paid $30,000 to Dino Sajudin, a doorman at Trump Tower, to obtain the rights to his story in which he alleged Donald Trump had an affair in the 1980s that resulted in the birth of a child. Sajudin in April 2018 identified the woman as Trump's former housekeeper.[4] AMI reporters were given the names of the woman and the alleged child, while Sajudin passed a lie detector test when testifying that he had heard the story from others. Shortly after the payment was made, Pecker ordered the reporters to drop the story.[5] In April 2018, AMI chief content officer Dylan Howard denied the story was “spiked” in a so-called “catch and kill” operation, insisting that AMI did not run the story because Sajudin‘s story lacked credibility.[6] On August 24, 2018, after AMI had released Sajudin from the contract, CNN obtained a copy of it and published excerpts. The contract instructed Sajudin to provide "information regarding Donald Trump's illegitimate child," but did not contain further specifics of Sajudin's story.[7] 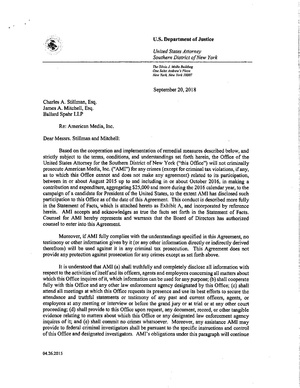 In 2016, AMI paid Playboy model Karen McDougal $150,000 for exclusive rights to her allegations of a ten-month affair with Donald Trump—which she claimed happened in 2006-2007, while he was married to Melania[8]—but A.M.I. never published the story. A.M.I. publicly acknowledged having made the payment after the Wall Street Journal revealed it days before the 2016 presidential election, but A.M.I. denied that its purpose had been to "kill damaging stories about" Trump; instead, A.M.I. claimed it had paid only for "exclusive life rights to any relationship [McDougal] has had with a then-married man" and "two years’ worth of her fitness columns and magazine covers."[9][10] In March 2018, McDougal filed a lawsuit to invalidate the non-disclosure agreement she had with AMI.[11][12] A month later, A.M.I. settled with McDougal, allowing her to speak about the alleged affair.[13] In August 2018, it was reported that A.M.I. CEO/Chairman David Pecker and AMI chief content officer Dylan Howard were granted witness immunity in exchange for their testimony regarding hush money payments made by Donald Trump's then-personal lawyer, Michael Cohen, in an attempt to influence the 2016 presidential election.[14]

On December 12, 2018, the U.S. Attorney’s Office announced its agreement with A.M.I. "AMI admitted that it made the $150,000 payment in concert with a candidate’s presidential campaign," the press release said, so that Karen McDougal wouldn't "publicize damaging allegations about the candidate before the 2016 presidential election. AMI further admitted that its principal purpose in making the payment was to suppress the woman’s story so as to prevent it from influencing the election." As a result of this agreement, A.M.I. would not face prosecution and agreed to provide extensive assistance to prosecutors about the involvement of Trump and other politicians with the company.[2] The same press release also revealed that Michael Cohen had been sentenced to three years in prison for various crimes, including the $150,000 campaign finance violation—the facilitation of the payment to McDougal—to which he pled guilty on August 21, 2018.[15][16][17]

On February 7, 2019, Amazon founder and Washington Post owner Jeff Bezos shared emails that he had received the previous day[18] in which AMI sought a public statement from him and his lawyer "affirming that they have no knowledge or basis for suggesting that AM’s coverage [of the murder of Jamal Khashoggi] was politically motivated or influenced by political forces, and an agreement that they will cease referring to such a possibility." AMI chief content officer Dylan Howard and his lawyer Jon Fine threatened Bezos, saying that if Bezos did not promptly meet the demands, AMI would publish selfies and sexts sent between Bezos and his girlfriend Lauren Sánchez.[19] The National Enquirer had published details of their affair the previous month. Bezos responded in a public article that he will refuse to make this "specific lie" nor participate in this blackmail bargain that "no real journalists [would] ever propose."[20] "Of course I don’t want personal photos published," Bezos added, but he said he chooses to "stand up, roll this log over, and see what crawls out." That same day, the Washington Post published an article on the matter, quoting a former federal prosecutor who speculated that this news could undermine AMI's recent deal with the government. If prosecutors decide they must file new criminal charges against AMI, the government may not be able "to continue to use them [AMI] to assist other ongoing investigations," said Robert Mintz.[21]