New York Film Academy – School of Film and Acting (NYFA) is a for-profit film school and acting school based in New York City, Los Angeles, and Miami. The New York Film Academy was founded in 1992 by Jerry Sherlock, a former film, television and theatre producer.[1] It was originally located at the Tribeca Film Center. In 1994, NYFA moved to 100 East 17th Street, the former Tammany Hall building in the Union Square. After 23 years of occupancy, the Academy relocated from Tammany Hall to 17 Battery Place.[2]

As of 2012, the school has 400+ employees[3] and over 5,000 students per year (many of them from outside the United States).[4] NYFA offers master, bachelor, and associate degrees, as well as one- and two-year conservatory programs, short-term workshops, and youth programs and summer camps.[5] 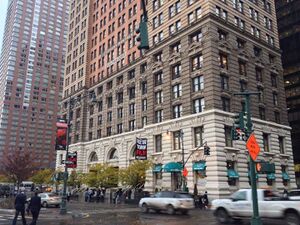 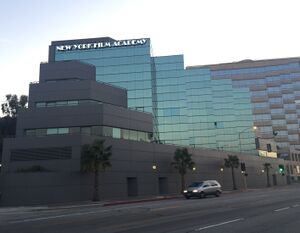 NYFA's programs include filmmaking, producing, screenwriting, cinematography, digital editing, documentary film, acting for film, 3D animation and visual effects, photography, game design, musical theatre, graphic design, and virtual reality, as well as an English as a Second Language (ESL) program that aims to combine traditional language learning with activities related to the arts.[6] In 2007 NYFA partnered with NBC News to start a program in broadcast journalism.[7] In 2010 the contract between NYFA and NBC expired, but the Broadcast Journalism programs at NYFA continue to be offered with many of the original faculty. NYFA degree programs, workshops and short-term courses are held around the world.[8] Summer workshops are offered at Harvard University.[9] International locations include Australia, Florence, Paris, Beijing, and Shanghai. Other international locations are offered at various times of the year.

Since 2007, the New York Film Academy has been collaborating with museums and major art institutions to organize cultural and filmmaking education initiatives for teens and young adults. Since 2010, the New York Film Academy has partnered with the Metropolitan Museum of Art. Working closely with each individual institution, the Film Academy contributes resources in curriculum development, teaching staff, and equipment to deliver programs that teach students the creative art of the moving image, as well as the importance and value of all forms of art and the institutions that preserve, protect and display them. The partnering institutions include:

The following list includes alumni from both the Film and the Acting schools:[17]