An Islamic flag is a flag that complies with Islamic rules. Traditionally Islamic flags were solid colour. The most favoured colours were black, white, red and green. However, other plain colours can be adopted. A bicolour or tricolour flag can also be adopted truly as an Islamic Flag. An example of a traditional solid coloured Islamic flag would be the flag of Libya.

The early Muslim community did not really have a symbol. During the time of Muhammad, Muslim armies and caravans flew simple solid-colored flags (generally black or white) for identification purposes. In later generations, the Muslim leaders continued to use a simple black, white, or green flag with no markings, writings, or symbolism on it. 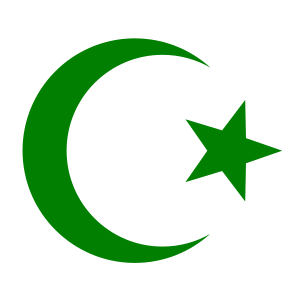 A typical presentation of the star and crescent

It wasn't until the Ottoman Empire that the crescent moon and star (star and crescent) became affiliated with the Muslim world. Legend holds that the founder of the Ottoman Empire, Osman I, had a dream in which the crescent moon stretched from one end of the earth to the other. Taking this as a good omen, he chose to keep the crescent and make it the symbol of his dynasty. There is speculation that the five points on the star represent the five pillars of Islam, but this is pure conjecture. The five points were not standard on the Ottoman flags, and it is still not standard on flags used in the Muslim world today. The crescent and star have no religious significance in Islam whatsoever, thus many Muslim scholars are against attaching these signs on Mosque minarets or using them to denote Muslim societies.

Ottomans being Turks were using a crescent bearing flag. When Selim I resumed power as the caliph, the Ottoman flag was red with a green circle and three yellow crescents. Ottomans for the first time separate the religious flag and the national flag. The national flag was red with crescent facing right, while the religious flag green with crescent facing right. Later, a five-cornered star was added to symbolize the five pillars of Islam. The typical green flag with crescent and star became a standard Islamic flag and is used till date, and it is very interesting that most of the people think that this flag has been used by Muslims since the beginning. This crescent bearing flag has been used by different Muslim empires and nations in the history especially those having Turkish origin. This crescent flag with some variations is still in use by different Muslim entities, e.g., Algeria, Azerbaijan, Comoros, Malaysia, Maldives, Mauritania, Pakistan, Tunisia, إيطاليا, Turkmenistan, Turkish Republic of Northern Cyprus, Uzbekistan, and Western Sahara.

Based on this history, many Muslims reject using the crescent moon as a symbol of Islam especially Arab countries (Algeria and Tunisia being exceptions). The faith of Islam has historically had no symbol, and many refuse to accept what is essentially an ancient pagan icon. It is certainly not in uniform use among Muslims, but commonly seen in many Non-Arab Muslim countries. 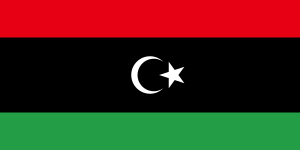 Traditionally, early Arab flags were of one colour only, usually black or white, and charged with a religious inscription. It is thought that Muhammad himself used such flags, and it is said that his followers fought under a white flag.

White was also traditionally the colour of the Umayyad Dynasty. The Abbasid Dynasty which succeeded them used a black flag. The Fatimid Dynasty of caliphs, meanwhile, had green as their traditional colour, while the Hashemites used red.

In 1911, at a meeting in Istanbul, it was decided that a modern flag to represent all Arabs should include all four of these colours. Three years later, the Young Arab Society decreed that a future independent Arab state should use a flag of these colours, and on May 30, 1917 Hussein bin Ali, Sharif of Mecca, leader of the Hejaz Revolt replaced his plain red flag with one horizontally striped in black, green, and white with a red triangular area at the hoist. This was seen as the birth of the pan-Arab flag.

Since that time, many Arab nations, upon achieving independence or upon change of political regime, have used a combination of these colours in a design reflecting the Hejaz Revolt flag. These flags include the current flags of Iraq, Syria, Yemen, Egypt, Kuwait, United Arab Emirates, Jordan, Palestinian National Authority, Algeria, and Sudan, and former flags of Iraq and Libya.

Other Arab or predominantly Muslim nations have kept single colour flags, often with some symbol or script. These flags include those of Libya, Turkey, Tunisia, Turkmenistan, Morocco, and Saudi Arabia. Pakistan's flag can also be considered alongside this group. 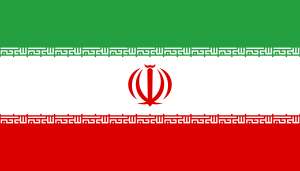 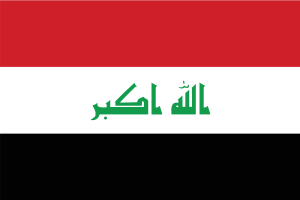 Where a symbol is used, most frequently it is the star and crescent. Script takes one of two forms, either the Shahadah or Allahu Akbar ("God is great"). Iraq uses the pan-Arab colours with the addition of Allahu Akbar—in recognizable form on Iraq's flag. Saudi Arabia and Afghanistan use the Shahadah, a declaration of faith: lā ilāha illā-llāh, wa muħammadan rasūlu-llāh in Arabic, translation "There is no god but Allah and Muhammad is His Prophet".

Limitations on the use of flags

Flags are used as a badge on army, naval and government officials uniforms as well as in government or emergency vehicles. Such usage is impermissible, however, with a flag bearing the Shahaadah or Allahu Akbar. This is in part because, in accordance to Islamic teaching, it is not recommended that one use the toilet in the presence of such phrases because they are taken from the Qur'an.

Unlike the practice in most Western nations, flags are usually depicted in Islamic countries with the staff to the right. This is analogous to the right-to-left form of Arabic script. This can make for confusion when flag images are shown without an accompanying flagstaff, as it may not be immediately obvious which way around the flag is being depicted.

In keeping with Islamic law, Muslim flags generally do not bear any representations of real creatures, though some Arab flags have eagles that are used as supporters on the Coats of Arms. These flags are not necessarily Islamic in their nature; rather they more likely to derive from the Pan-Arabist movement. It is rare to find plants depicted on flags of Muslim nations, even though this is permissible under Islamic guidelines. Some state and royal flags of Saudi Arabia depict palm trees.

All these flags are from currently existing countries.