هذا المقال هو عن the name of the city that is currently the capital of the People's Republic of China. إذا كنت تريد other uses، انظر Beijing (disambiguation). 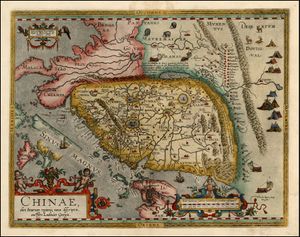 A 1584 map of China by Abraham Ortelius (based on a manuscript map by Luiz Jorge de Barbuda (Ludovicus Georgius), with Beijing marked as C[ivitas] Paquin

The spelling Beijing was adopted for use within the People's Republic of China upon the approval of Hanyu Pinyin on February 11, 1958, during the Fifth Session of the 1st National People's Congress. It became obligatory for all foreign publications issued by the People's Republic on 1 January 1979. It was gradually adopted by various news organizations, governments, and international agencies over the next decade.[1]

The Chinese characters 北 ("north") and 京 ("capital") together mean the "Northern Capital". The name was first used during the reign of the Ming dynasty's Yongle Emperor, who made his northern fief a second capital, along with Nanjing (南京, the "Southern Capital"), in 1403 after successfully dethroning his nephew during the Jingnan Campaign. The name was restored in 1949 عند تأسيس جمهورية الصين الشعبية.

"Peking" is a romanization created by 17th- and 18th-century French missionaries. In De Christiana expeditione apud Sinas (1615), Matteo Ricci calls the city Pechinum.[2] (The English translation gives Pequin.[3]) "Peking" appears in A Description of the Empire of China (1735) by Jean-Baptiste Du Halde.[4][5] These early spellings may represent pronunciation in the Nanjing dialect, which was used as a lingua franca at this time,[6][7] or the various other southern Chinese languages (e.g., Cantonese, Hokkien and Hakka) used by the traders of the port cities visited by early European traders. Peking was the English name of the city until the adoption of pinyin. However, it is still employed adjectivally in terms such as "Pekingese", "Peking duck", "Peking Man" and various others. The name is retained at Peking University as well. The name remains in common and official use in many other languages. 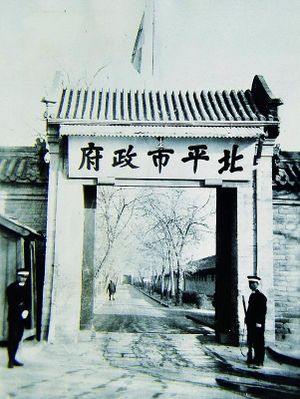 In Chinese, the abbreviation of Beijing is its second character 京 ("Capital"). This is employed, for example, as the prefix on all Beijing-issued license plates.

In the Latin alphabet, the official abbreviation are the two initials of the region's characters: BJ.[24]

In addition to Nanjing, several other East Asian and Southeast Asian cities have similar names in Chinese characters despite appearing dissimilar in English transliteration. The most prominent is Tokyo, Japan, whose Han script name is written 東京 (Dongjing, or "Eastern Capital"). 東京 was also a former name of Hanoi (as Đông Kinh or "Tonkin") in Vietnam during the Later Lê Dynasty. A former name of Seoul in South Korea was Gyeongseong, written in Han script as 京城 or "Capital City". Kyoto in Japan still bears the similar-meaning characters 京都: the character "都", du in Chinese, can also mean "capital".

The history of China since the Tang dynasty has also been full of secondary capitals with directional names. Under the Tang, these were Beidu ("north capital", at Taiyuan in Shanxi); Nandu ("south capital", first, Chengdu in Sichuan and, later, Jiangling in Hubei); Dongdu ("east capital", Luoyang in Henan); and Xidu ("west capital", Fengxiang in Shaanxi).[25]

The Nanjing of the Northern Song was located at Shangqiu in Henan.[26] The Jurchen Jin located theirs at Kaifeng,[27]) which had been the Northern Song's "Dongjing".[26] The Jurchen Jin also had a Dongjing ("Eastern Capital"), which was, however, located at Liaoyang in Liaoning.[27] Apart from these, there were two Xijings (西京, "Western Capital"): one was the "Western Capital" of the Northern Song dynasty, located at Luoyang;[26] the other was held by the Liao[28] and Jurchen Jin[27] at Datong. Liaoyang was the Zhongjing (中京, "Central Capital") of the Liao dynasty[28] and, finally, another Zhongdu ("Central Capital") was planned but never completed. It was the proposed capital of the Ming Dynasty mooted by the Hongwu Emperor in the 14th century, to be located on the site of his destroyed childhood village of Zhongli (鍾離), now Fengyang in Anhui.[29]