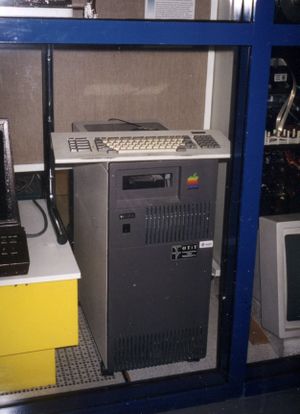 The first IRC server, tolsun.oulu.fi, a Sun-3 server on display near the University of Oulu computer centre. (2001)

Internet Relay Chat is implemented as an application layer protocol to facilitate communication in the form of text. The chat process works on a client–server networking model. Users connect to an IRC server, which may be part of a larger IRC network. Users connect using a client, which may be a web app, a standalone desktop program, or embedded into part of a larger program. Examples of programs used to connect include Mibbit, IRCCloud, KiwiIRC, and MIRC.

IRC was created by Jarkko Oikarinen in August 1988 to replace a program called MUT (MultiUser Talk) on a BBS called OuluBox at the University of Oulu in Finland, where he was working at the Department of Information Processing Science. Jarkko intended to extend the BBS software he administered, to allow news in the Usenet style, real time discussions and similar BBS features. The first part he implemented was the chat part, which he did with borrowed parts written by his friends Jyrki Kuoppala and Jukka Pihl. The first IRC network was running on a single server named tolsun.oulu.fi.[9] Oikarinen found inspiration in a chat system known as Bitnet Relay, which operated on the BITNET.[10]

Jyrki Kuoppala pushed Oikarinen to ask Oulu University to free the IRC code so that it also could be run outside of Oulu, and after they finally got it released, Jyrki Kuoppala immediately installed another server. This was the first "IRC network". Oikarinen got some friends at the Helsinki University and Tampere University to start running IRC servers when his number of users increased and other universities soon followed. At this time Oikarinen realized that the rest of the BBS features probably wouldn't fit in his program.[9]

Oikarinen got in touch with people at the University of Denver and Oregon State University. They had their own IRC network running and wanted to connect to the Finnish network. They had obtained the program from one of Oikarinen's friends, Vijay Subramaniam—the first non-Finnish person to use IRC. IRC then grew larger and got used on the entire Finnish national network—FUNET—and then connected to Nordunet, the Scandinavian branch of the Internet. In November 1988, IRC had spread across the Internet and in the middle of 1989, there were some 40 servers worldwide.[9]

IRC has changed much over its life on the Internet. New server software has added a multitude of new features.

After its golden era during the 1990s and early 2000s (240,000 users on QuakeNet in 2004), IRC has seen a significant decline, losing around 60% of users between 2003 and 2012, with users moving to newer social media platforms like Facebook or Twitter,[5] but also to open platforms like XMPP which was developed in 1999. Certain networks like Freenode have not followed the overall trend and have more than quadrupled in size during the same period.[5] However, Freenode, which in 2016 had around 90,000 users, has since declined to about 9,300 users.[16]

The largest IRC networks have traditionally been grouped as the "Big Four"[17][18][19][20]—a designation for networks that top the statistics. The Big Four networks change periodically, but due to the community nature of IRC there are a large number of other networks for users to choose from. 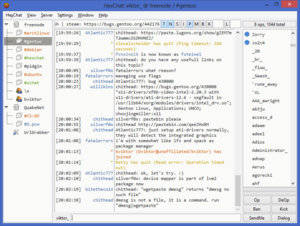 A screenshot of HexChat, an IRC client for GTK environments. 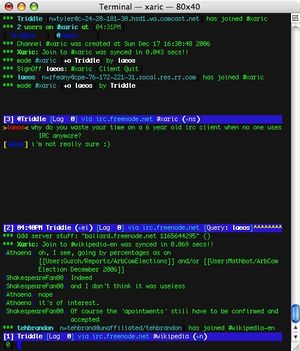 Xaric, a text-based IRC client, in use on Mac OS X. Shown are two IRC channels and a private conversation with the software author.

IRC is an open protocol that uses TCP[23] and, optionally, TLS. An IRC server can connect to other IRC servers to expand the IRC network.[24] Users access IRC networks by connecting a client to a server.[25] There are many client implementations, such as mIRC, HexChat and irssi, and server implementations, e.g. the original IRCd. Most IRC servers do not require users to register an account but a nick is required before being connected.[26]

IRC was originally a plain text protocol[23] (although later extended), which on request was assigned port 194/TCP by IANA.[27] However, the de facto standard has always been to run IRC on 6667/TCP[28] and nearby port numbers (for example TCP ports 6660–6669, 7000)[29] to avoid having to run the IRCd software with root privileges.

The protocol specified that characters were 8-bit but did not specify the character encoding the text was supposed to use.[30] This can cause problems when users using different clients and/or different platforms want to converse.

All client-to-server IRC protocols in use today are descended from the protocol implemented in the irc2.4.0 version of the IRC2 server, and documented in RFC 1459. Since RFC 1459 was published, the new features in the irc2.10 implementation led to the publication of several revised protocol documents (RFC 2810, RFC 2811, RFC 2812 and RFC 2813); however, these protocol changes have not been widely adopted among other implementations.[بحاجة لمصدر]

Although many specifications on the IRC protocol have been published, there is no official specification, as the protocol remains dynamic. Virtually no clients and very few servers rely strictly on the above RFCs as a reference.[بحاجة لمصدر]

Microsoft made an extension for IRC in 1998 via the proprietary IRCX.[31] They later stopped distributing software supporting IRCX, instead developing the proprietary MSNP.

The standard structure of a network of IRC servers is a tree.[32] Messages are routed along only necessary branches of the tree but network state is sent to every server[33] and there is generally a high degree of implicit trust between servers. However, this architecture has a number of problems. A misbehaving or malicious server can cause major damage to the network[34] and any changes in structure, whether intentional or a result of conditions on the underlying network, require a net-split and net-join. This results in a lot of network traffic and spurious quit/join messages to users[35] and temporary loss of communication to users on the splitting servers. Adding a server to a large network means a large background bandwidth load on the network and a large memory load on the server. Once established, however, each message to multiple recipients is delivered in a fashion similar to multicast, meaning each message travels a network link exactly once.[36] This is a strength in comparison to non-multicasting protocols such as Simple Mail Transfer Protocol (SMTP)[بحاجة لمصدر] or Extensible Messaging and Presence Protocol (XMPP)[بحاجة لمصدر].

Many daemons and networks have added extra modes or modified the behavior of modes in the above list.[40][41][42][43] 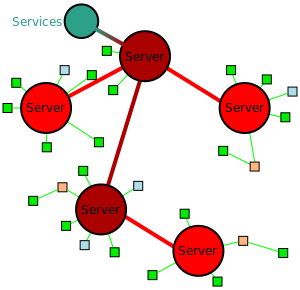